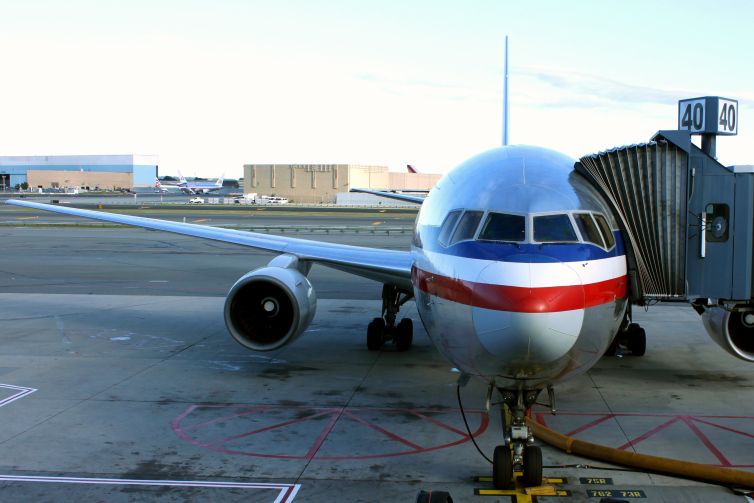 American Airlines is looking to refinance close to $900 million in bonds for Terminal 8.

American Airlines is looking to refinance its longstanding special facility revenue bonds tied to the lease and construction of the eight-year-old Terminal 8 at John F. Kennedy International Airport. But before debt replacement can fully take flight, the Fort Worth, Texas-based airline must clear a runway full of bureaucratic hurdles.

As the financing faces maturing this summer, government documents show that American is looking to refund 11- and 14-year-old bonds issued by the New York City Industrial Development Agency, or IDA, and replace them with new ones issued by a state-run counterpart. The board of governors for the Port Authority of New York & New Jersey, which controls the land at JFK, voted today to give its consent to refinance as well as to tweak conditions of the mortgage on the terminal’s ground lease.

American has $882 million in bonds (still due to shareholders) that funded its long-standing ground lease at the site, demolition of the previously existing buildings there as well as construction of a new 1.4-million-square foot terminal that opened in 2007 and was fully finished a year later, according to government documents. Along with American Airlines and subsidiary American Eagle, the 35-gate terminal handles flights from airlines including Air Berlin, Finnair and Qatar Airways.

The airline originally borrowed $1.2 billion for the development. That breaks down as follows: American first took out $500 billion worth of tax-exempt bonds in 2002 through IDA, a New York City Economic Development Corporation subsidiary, to fund work on the JFK project, which cost a reported $1.3 billion. Part of that debt was retired in 2012, Port Authority documents indicate. That was followed up in 2005 with a $700 million issuance through the agency, according to a press release from EDC at the time. The second set of bonds was uninsured and carried a fixed rate, trade publication The Bond Buyer reported in 2005.

The combined debt is now slated to expire this August, according to Port Authority documents. American plans to refund it with new bonds issued by the New York State Transportation Development Corporation, a wing of Empire State Development that helps fund major transit projects. The Port Authority’s consent was required for the new transaction to go through. American will pay the agency a one-time fee of $3.2 million in the refinancing process as it will update the leasehold mortgage on the airline’s ground lease.

The agency will amend its lease with American at Terminal 8, which currently expires in December 2036, so that the leasehold mortgage on the land indicates that the bonds have been issued by the state and not by the city, Port Authority Executive Director Patrick Foye said in a post-meeting press conference.

NYS Transportation Development Corporation board of directors voted earlier this month to approve documentation and hire lawyers in preparation for the approximately $900 million bond issuance, according to an agenda for its April meeting. The board is expected to vote to approve the documents at its May meeting, the agenda indicates.

The Tax Equity and Fiscal Responsibility Act requires that a hearing be held when certain bonds are refunded and the issuer changes—in this case going from the IDA to the NYS Transportation Development Corporation. Gov. Andrew Cuomo is also required to sign off on the issuance once the board approves the financing.

A spokesman for ESD said a hearing had not yet been scheduled, but one should be calendared in the near future.

Going through the city or the state to issue bonds is not an uncommon practice for companies doing major infrastructure projects at airports. LaGuardia Gateway Partners, the group of developers building a new terminal building at LaGuardia Airport, is seeking a similar issuance for the project, which is expected to cost more than $4 billion. The consortium is looking for about $2.5 billion in special facility bonds, which will also be issued by NYS Tranportation Development Corporation, to fund its work at the airport, according to credit rating agencies.

A representative for American did not return a request for comment.