Why Once Dominant Supermarkets Are Falling Before Specialty Grocers 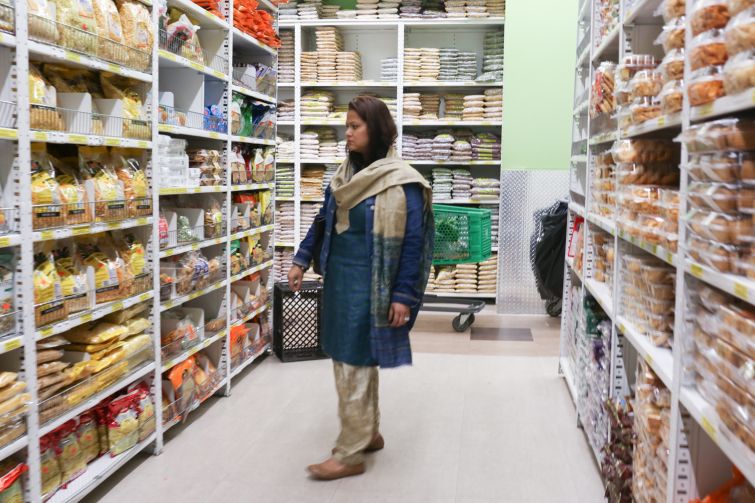 It’s a challenging time to be a grocery store owner—that is, if you’re one of the older, name brands.

Traditional supermarkets are facing danger from all sides. Enemies are lurking at pharmacies like Duane Reade. Shells are coming from online retailers like Amazon and FreshDirect. And grocers are catching flak from newer heavyweights such as Whole Foods and Trader Joe’s.

But the specialty grocer—the one that hawks exotic ingredients and brands the average American has never heard of—doesn’t seem to be hurting at all.

Whether it is one of those New York institutions like the Indian and international market Kalustyan’s or one of the Asian stores like HMart or a health-focused specialty market where there is nary a Oreo or Coca-Cola product in sight, this type of store is not on the ropes—it’s surging.

Perhaps nothing might illustrate this better than the Waldbaum’s in Bensonhurst that closed last November. Waldbaum’s was one of those titans of the grocery business, founded at the turn of the century and sold in 1986 to the Great Atlantic & Pacific Tea Company for $287 million, according to its website, but when A&P filed for Chapter 11 bankruptcy last July, the Bensonhurst Waldbaum’s appeared to be one of the causalities.

Who won the bid to take over the Bensonhurst Waldbaum’s space at 8121 New Utrecht Avenue?

The Asian grocer JMart, which is based in Queens at Flushing’s New World Mall.

“Incomes are up, education is up and with that comes a different food requirement,” Anna Castellani, who owns the health-focused Foragers Market with one location in Chelsea and one in Dumbo, Brooklyn, told Commercial Observer. “In urban areas you have a different eater than you did 10 years ago. People are buying, eating and experimenting with flavors every day.”

The market has been described as the Disney World of food stores by Gothamist. From nuts to curry powder to chocolates to whatever, it serves products from more than 80 countries around the world.

When cousins Aziz Osmani and Sayedul Alam bought the store in 1988, it was a struggling, 1,000-square-foot Indian spice shop, Mr. Osmani said. They started shifting the business model by increasing imports of spices and ingredients from around the globe, making it a sort of United Nations for the culinary inclined. Celebrity chefs like Emeril Lagasse, Bobby Flay and Martha Stewart have been known to stop by.

“It is a very wide range of variety that we sell,” Mr. Osmani said. “What we are offering that traditional supermarkets do not is why we are special. We have about six-dozen varieties of rice. You think there is only one type of black pepper? No, we have 10 different types of black pepper. And they all come from different parts [of the world].”

Supermarkets that cater to certain communities have relied on those ethnic demographics for decades and are still growing in those neighborhoods.

But that doesn’t mean that Asian markets are exclusively patronized by Asians or that any of these ethnic markets stay exclusive to certain groups of people.

If it’s sushi you want, you could get fresh salmon from Katagiri at 224 East 59th Street, a Japanese specialty market which has been operating in the city since 1907, according to the store’s website. Or maybe even Sunrise Market, another Japanese specialty retailer in New York that has been around since 1995 and currently has three locations: 4 Stuyvesant Street, 494 Broome Street and 12 East 41st Street. The Midtown market at East 41st Street opened the most recently, in 2011.

Patel Brothers grocery store, which sells Indian groceries at 37-27 74th Street in Jackson Heights, Queens, grew from 7,000 to 11,000 square feet last year. The owners renovated the store (which they’ve been in since 1984) and expanded. The Chicago-based Patel Brothers, which has been around since 1974, now has more than 50 locations around the country and the proprietors have plans to open more.

“We get everyone,” said Tulsi Patel, a founder of the grocery store, “Indian people, Nepalese, Malaysian, South Africans and [Caucasian] people. Everyone comes here.”

It’s no wonder why the Bogopa Service Corporation-owned Food Bazaar, which sells goods from Poland, Peru, Japan, Korea and Greece (to name a few), has done well enough to open 19 stores up and down the tri-state area, including 14 active outlets in New York City since 1988. It has announced this year it will open six new stores in the region, including one at the shuttered Pathmark at 111-10 Flatlands Avenue in East New York and three other former A&P locations in New Jersey.

The company opened a massive 75,000-square-foot outlet in Long Island City at 42-02 Northern Boulevard in Queens in 2013 and recently completed a renovation of its Williamsburg store at 21 Manhattan Avenue.

Another Asian specialty market HMart (no relation to JMart) has also taken the grocery store market by storm. The Korean grocery store, which first opened in Woodside, Queens in 1982, has more than 50 locations around the country and seven locations in New York City, according to its website.

And HMart is focused today on further growth in the city, according to Eastern Consolidated, which is representing the chain in its real estate expansion.

“We have given [HMart] demographic studies, and they are really doing their homework to find out at what price levels can they get in,” said James Famularo, a senior director and principal at Eastern Consolidated. “There is a saying in our business: Either you are opening stores, or you are closing them.”

Besides ethnic retailers, Mr. Famularo has noticed that more and more health-conscious specialty markets are opening in the city, inspired by the rise of Whole Foods and organic online grocer FreshDirect, which sources local farms for produce.

He is representing a Long Island catering company that is looking to open 10 organic grocery stores in Manhattan and probably Brooklyn. (Mr. Famularo said he is bound by contract not to release the name of his client yet.)

Ms. Castellani’s Foragers Market, which emphasizes local farm-grown food, will have its third location in Dekalb Market Hall, a food hall opening at the 1.8-million-square-foot City Point complex this year in Downtown Brooklyn.

And Union Market, a grocery store that focuses on organic and all-natural products, which has three locations in Brooklyn and one in Manhattan, is opening two new outlets. One at 342 Flatbush Avenue in Prospect Heights, Brooklyn, and at 1525 Bedford Avenue in Crown Heights, which is a planned 176-unit rental development, as CO first reported.

“We must have over 100 deals that we are developing at the moment. I’d say half are somehow or another related to health, wellness and everything from yoga to spin classes,” Mr. Famularo said. “It’s a big deal nowadays. People are willing to pay to be healthy.”

To adjust to the times, specialty grocery stores are also looking to add experiences to their places of business to entice people to leave their homes, said Christopher Conlon, the chief operating officer at Acadia Realty Trust, which is co-developing City Point. (City Point will also have a new Trader Joe’s.)

Food Bazaar has cooking classes at its Long Island City location for example, and Kalustyan’s, which also serves prepared foods, added to its seating area with its recent expansion last year. Foragers Market has a restaurant and a wine shop amid its groceries.

“Grocery stores years ago didn’t think of having a restaurant on the floor. Today you better have prepared food because people don’t want to cook every night,” Mr. Conlon said. “The groceries doing it the best are combining a unique experience into a retail area…[People] still need to go to a grocery store for some things. But if you are not evolving to be a smart player, you will die.”