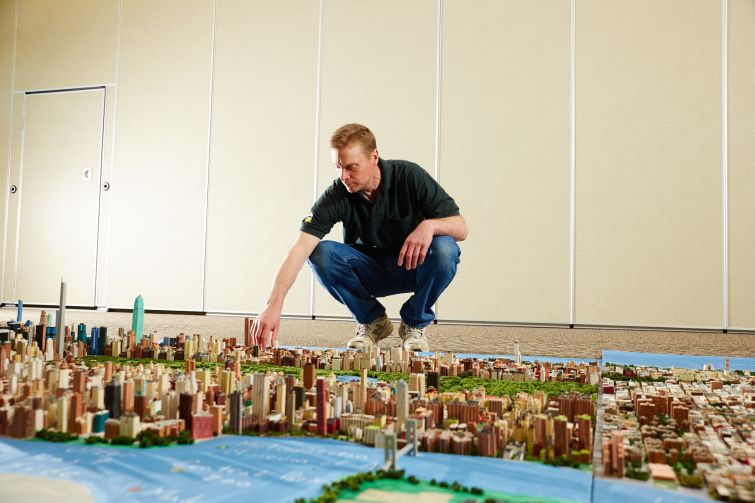 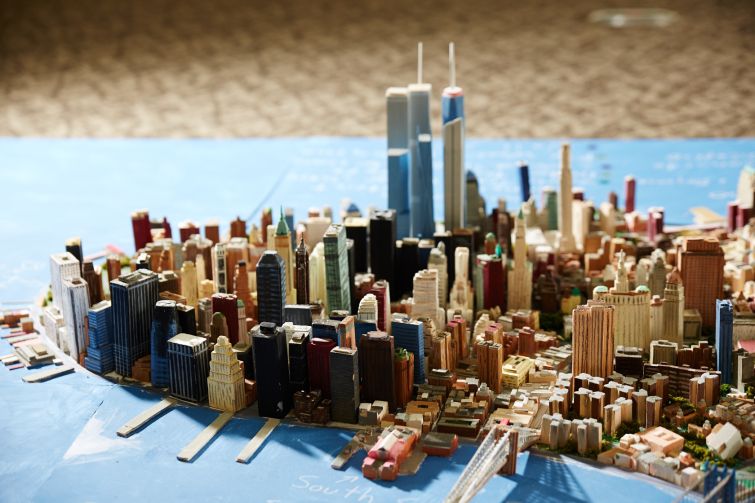 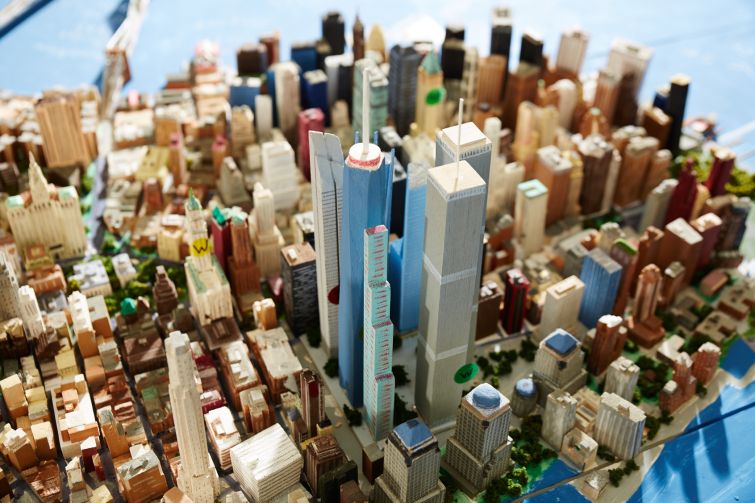 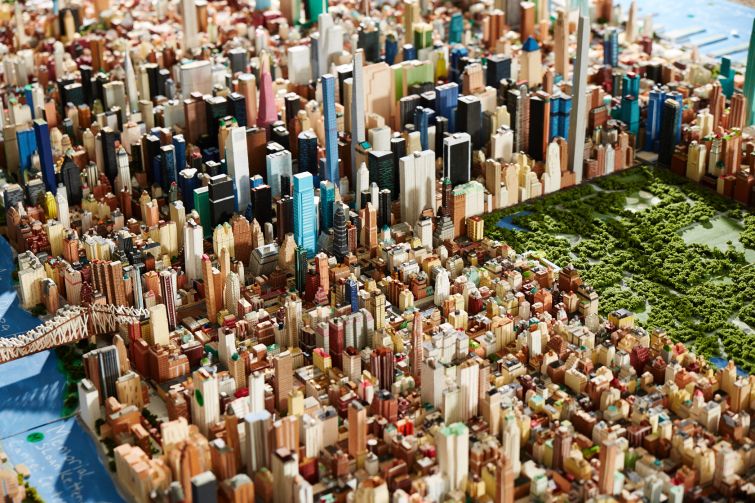 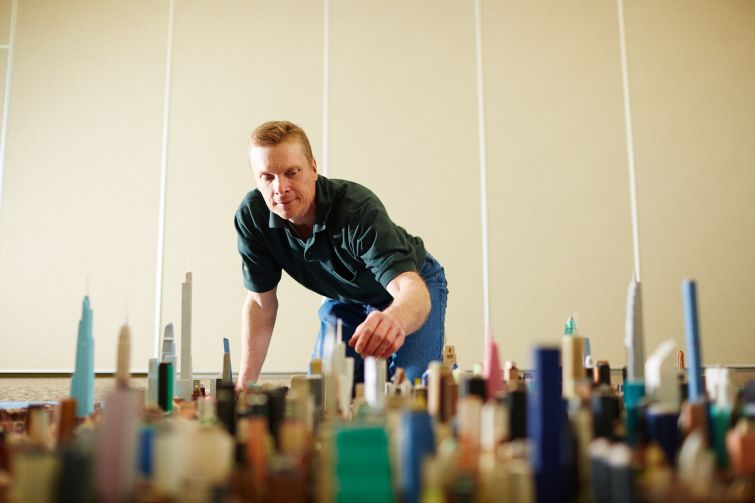 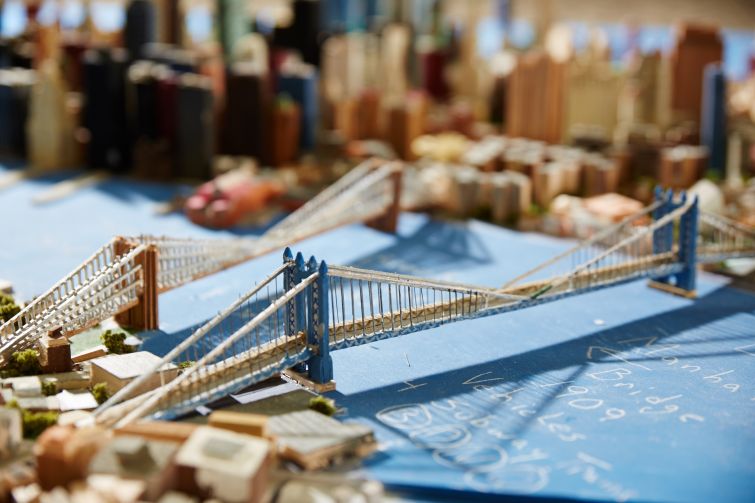 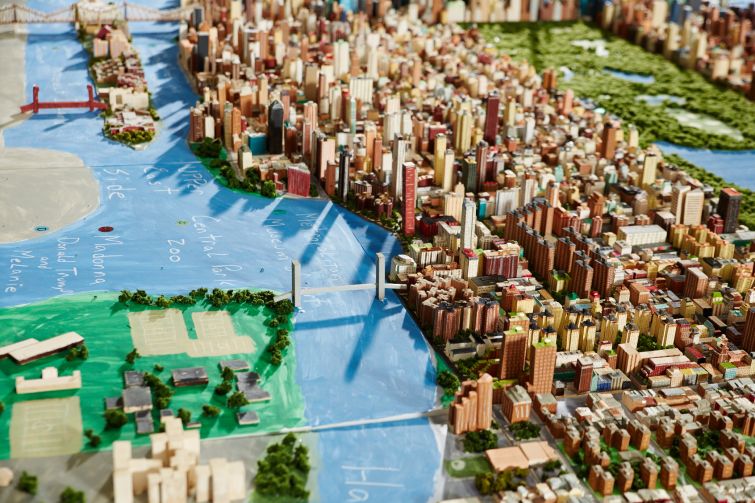 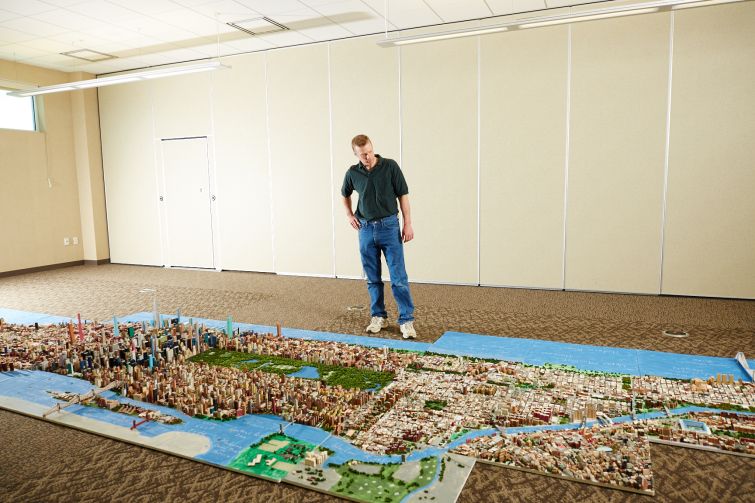 Rome wasn’t built in a day—but after nearly a dozen years, Joe Macken completed Manhattan. Or, at least, a miniature model of it.

Mr. Macken—a native of Queens who now lives in Clifton Park in upstate New York—constructed his mini-Manhattan by hand in his spare time, entirely of balsa wood and containing most of Manhattan’s iconic structures, like the Chrysler Building, the Empire State Building and the Woolworth Building.

The model is a tribute to the city he loves and grew up in—but it’s not really for city folk. One of its purposes, he said, is to educate upstate people about Gotham.

“It’s amazing to me, but even though this is the capital region up here, so many people have never seen New York City—they’ve never been there,” Mr. Macken said. “I’m like what? I assumed everyone has been there and seen it. I always thought people from other states haven’t been there—I could see that. But people from New York state?”

It’s hard to call Mr. Macken’s masterpiece a mini-Manhattan, when it measures more than 30 feet long. However, the 3D panorama is 2,400 times smaller that the real thing and packs more than 37,000 buildings (which took Mr. Macken nine hours to count).

This idea (maybe even obsession?) to create this work was first instilled in Mr. Macken as a child when he visited the exhibit called the Panorama of the City of New York at the Queens Museum—which has been around since the 1964 World’s Fair in Flushing Meadows Corona Park but was constructed by a team of 100 people and has all five boroughs.

Mr. Macken, 53, vowed to create his own version after that trip. He never actually thought he would finish when he started in May 2005, but the married father of three (a 13-year-old and twin 8-year-olds) spent an average of 18 hours a week in his basement crafting the mini-sculptures and hand painting them. He sometimes spent all night with the little city that never sleeps. Then he would drink two or three cups of coffee before heading to his day job as a beverage delivery truck driver.

Mr. Macken started smack in the middle of Midtown with Rockefeller Center. Although his favorite building has always been the Empire State Building, he wanted to start farther north (besides he had great memories of Radio City Music Hall as a child, too) and make his way outward.

He made frequent trips to the city to study the real deal and spent a lot of time Googling images of the buildings. Slowly, he learned how to make the models faster and more accurately. (The most difficult model, he said, was 1 Bryant Park, also known as the Bank of America Tower.)

In the past few weeks he has been showing the model to neighbors and locals for the first time—not even his wife had seen it completed before this year.

“There were times when she would get upset at me for staying downstairs for so long,” Mr. Macken said. But “she loves it. When my wife saw it, she couldn’t believe it. She said, ‘This is what you were working on downstairs all those years!’ ”

Looking at the model is like peering into the future. It contains many buildings that aren’t completed—or haven’t even broken ground. These include the likes of SL Green Realty Corp.’s One Vanderbilt, Extell Development Company’s Nordstrom Tower, JDS Development Group’s 111 West 57th Street, Related Companies’ Hudson Yards complex, the Robert A.M. Stern-designed 30 Park Place and Silverstein Properties’ 2 World Trade Center. (In the case of 2 WTC, he has both the Norman Foster and Bjarke Ingels’ designs of the planned tower—just in case.)

Cleverly, Mr. Macken designed the model like a giant puzzle. The island is broken into 52 pieces and can be disassembled and packed when he needs to move it. And while he is still updating the model to include more new buildings, Mr. Macken included the Twin Towers at the World Trade Center—like a true New Yorker would—for sentimental and educational reasons.

“I showed people [upstate] exactly where [the planes] hit, and people were just like staring’—they were mesmerized,” Mr. Macken said. “They saw it on TV, but they don’t know exactly where it hit or where the World Trade Center buildings were. It was an education for the people. I also wanted to do a little bit of a tribute.”

Mr. Macken’s tiny town was also relatively cost efficient. The Queens Museum’s Panorama cost $672,662.69 in 1964 (about $5 million today), according to the museum’s website. Mr. Macken spent approximately $5,700 building his version, which is only one borough so far.

The next frontier is to building the outer boroughs, and Mr. Macken has already started with parts of Brooklyn, Queens and the Bronx. He has crafted the Brooklyn Bridge and some Dumbo buildings. He’s also about to start the Triborough (or Robert F. Kennedy) Bridge.

“My goal is to make all five boroughs. That’s probably not going to happen, but that is my goal,” Mr. Macken said. “I didn’t think I would finish Manhattan. I thought it was too big a task. So you never know. If I ever get people to help me and I show them how to do it, maybe I’ll be able to finish the whole thing.”