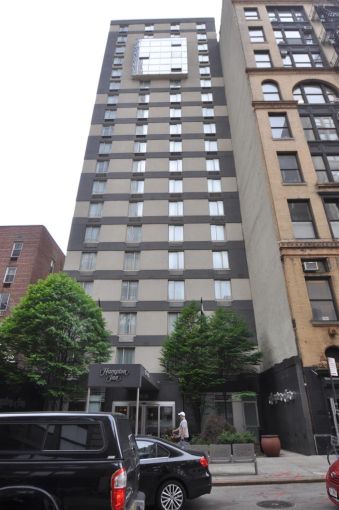 A $32.9 million commercial mortgage-backed securities note on the Hampton Inn Manhattan-Chelsea at 108 West 24th Street was defeased and will pay off some of the deal’s investors, according to data Trepp provided exclusively to Commercial Observer.

The original borrower, Pennsylvania-based Hersha Hospitality Trust, sold off a total of seven Manhattan hotels, including the Chelsea Hampton Inn, to Chinese investment firm Cindat Capital Management for a total of $571 million, according to city records. The Chelsea hotel between Avenue of the Americas and Seventh Avenue sold for $81.3 million.

Cindat used $335 million in financing, comprised of a $285 million mortgage from Natixis Real Estate Capital and a $50 million mezzanine loan from Oaktree Capital Management, to fund the acquisition of the hotel portfolio.

The super senior A4 bond, which currently carries a $831 million balance, will be paid back with the recent defeasance, said Sean Barrie, an analyst at Trepp. “The deal has already had 31.1 percent of its original balance defeased, and those still with skin in the game hope that number goes up even higher,” he said.

The security, which totaled $3.78 billion at the time of origination, has been paid down to $2.12 billion, according to Trepp.

The largest remaining loan in Deutsche Bank security is a $345 million note on the Mall of America in Bloomington, Minn., which accounts for 16.29 percent of the deal’s remaining collateral.