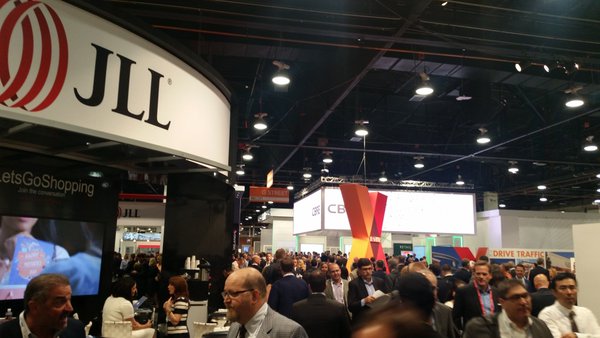 It might be still early in the day in Las Vegas, but already we’ve been hitting up the booths taking part in ICSC RECon. In case you haven’t been keeping up on Twitter, these are some takeaways from today’s tour of the convention.

We met up with RKF’s Robert K. Futterman and Jeff Fishman at the brokerage’s booth. Mr. Fishman told us that there’s “still such an abundance of capital out there” despite the fact that lenders are tightening their belts.

Robert Futterman of @RKFretail says he has 150 brokers and will add 50 in next 3 years in LA, NYC, Chicago, Miami + Toronto. @ICSC_RECon

Mr. Futterman’s firm has hit 150 brokers and he plans to beef up his staff by one-third in the coming years in major cities that include Los Angeles, Miami and Toronto as well as New York City.

.@SajeWellness is prepping to come to LA and NYC, I got to sample their essential oils for chronic pain + headaches. pic.twitter.com/Dp5iU4w8nR

Saje Natural Wellness, an oil and health retailer based in British Columbia, Canada, is eyeing making an entrance to the United States, namely in Los Angeles and New York City (more to come on this).

We also stopped by the JLL booth, from which you could see the booth of rival brokerage CBRE.

We caught up with Michael Hirschfeld, an executive vice president of national retail tenant services at JLL, and his son, Brian, who recently started out as an intern at the company. Michael told us that “there are a lot of tenants that want to be in New York City.”

And of course, it wouldn’t be Las Vegas without catching sight of an impersonator or two. In this case, we spotted a man dressed as the bumbling character Alan Garner from The Hangover movie franchise. (This one was from last night… But you can’t really tell in Vegas. No clocks on the walls.)