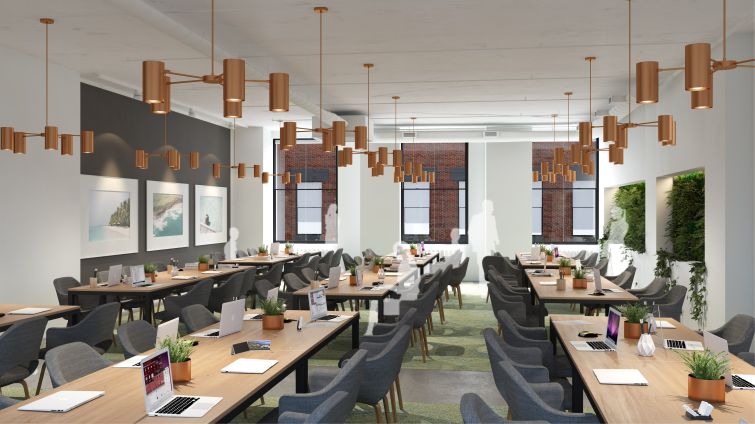 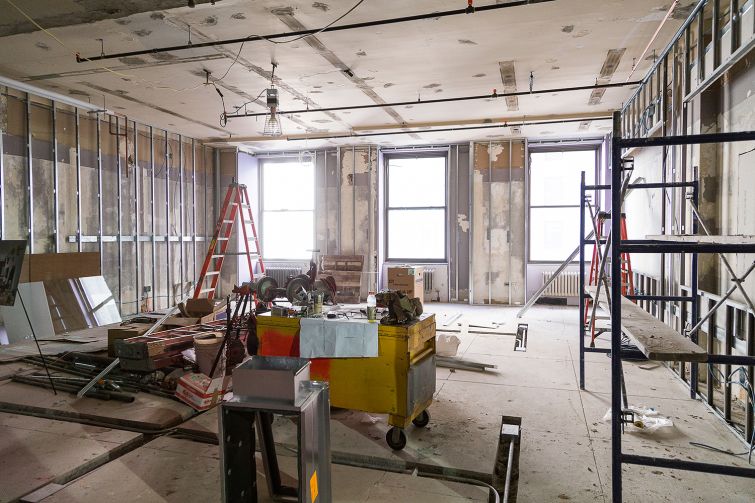 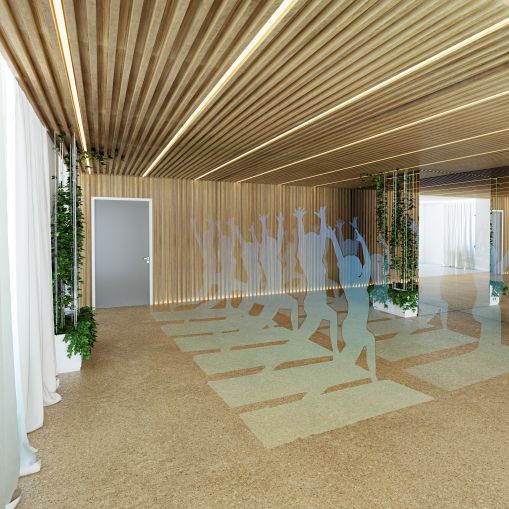 The fitness studio will host more than 30 classes a week (Rendering: Primary). 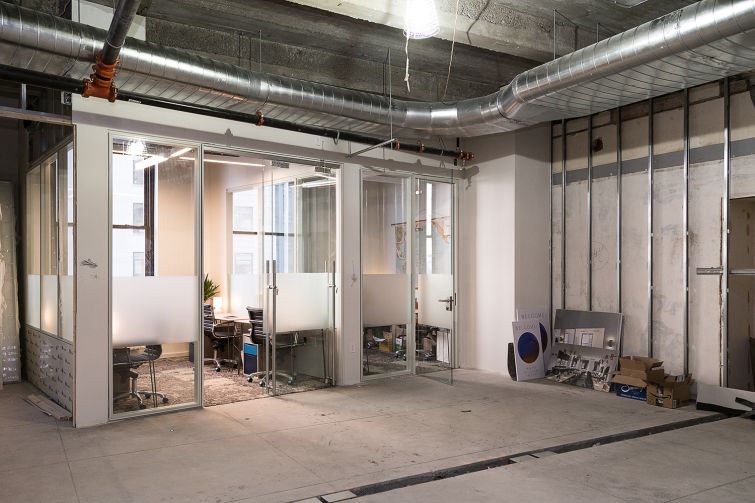 A model office suite for up to four people (Photo: Kaitlyn Flannagan/ For Observer). 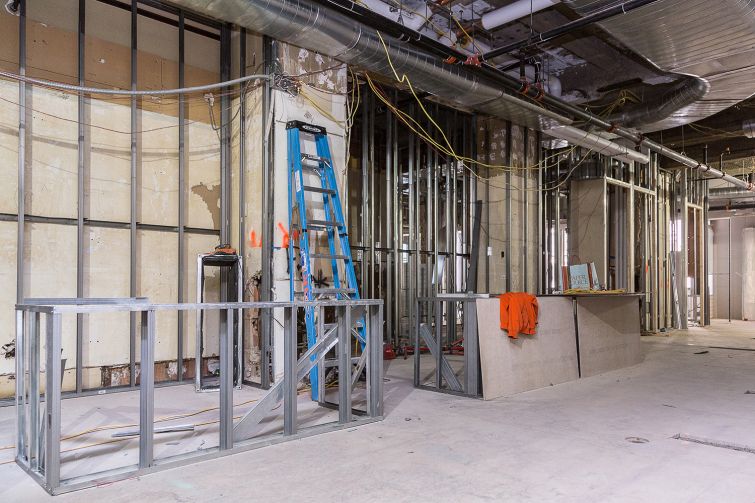 The frame of the kitchen, which will serve healthy snacks and organic food catered by Dig Inn (Photo: Kaitlyn Flannagan/ For Observer). 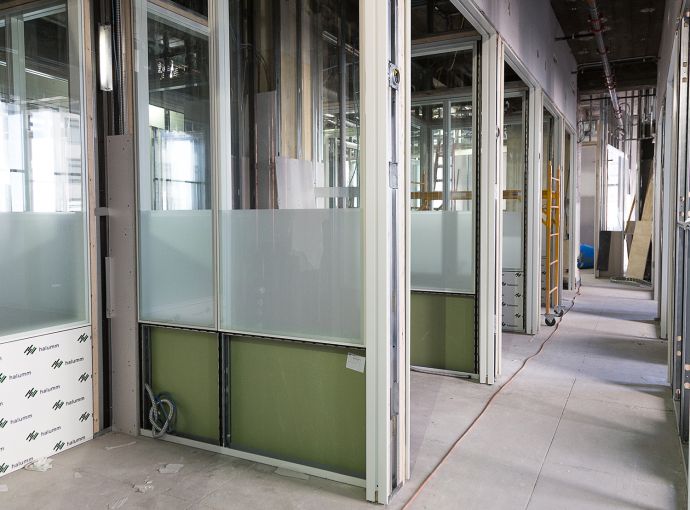 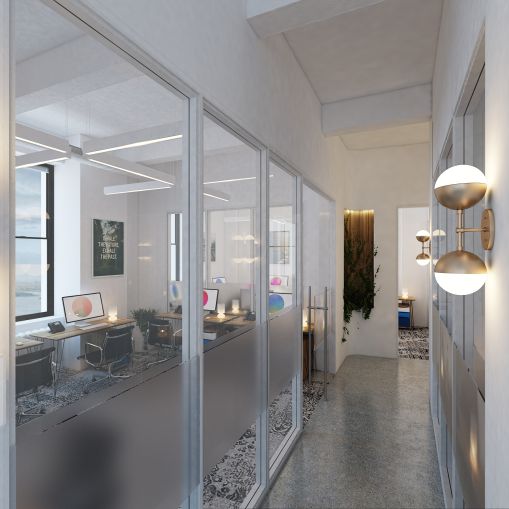 Some private offices will be big enough to one up to 10 people (Rendering: Primary). 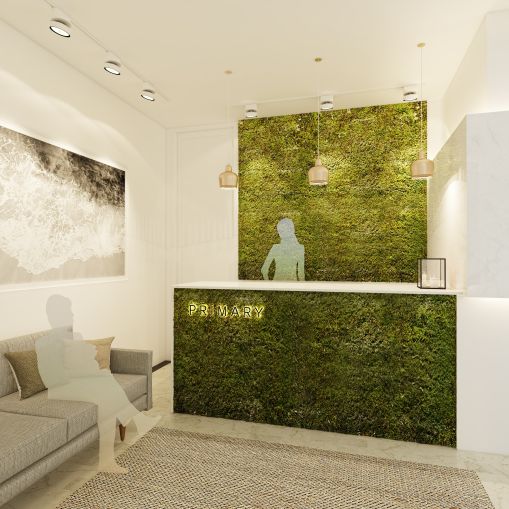 Green walls are big for this health-focused office (Rendering: Primary). 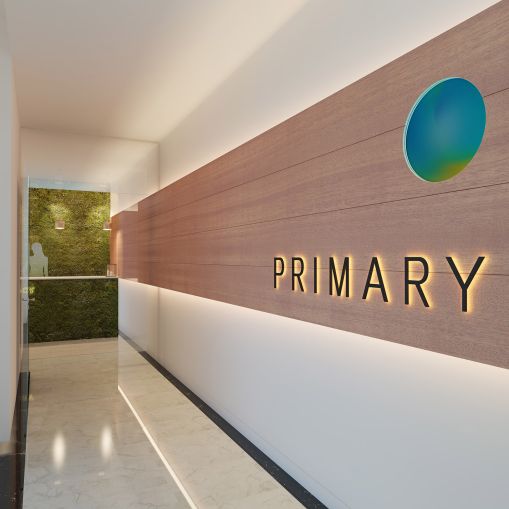 The wood and green walls are elements that reflect Primary's focus on health (Rendering: Primary).
Previous Next

In just over half a decade, WeWork has grown to become the face of the office coworking revolution and was recently valued at $16 billion. Yet, its first two hires, Lisa Skye Hain and Daniel Orenstein, thought that something was missing there.

That something? They aren’t going so far as to call it “co-health,” but sort of. Ms. Skye Hain and Mr. Orenstein recently created their own coworking company called Primary with an emphasis on healthy living because it should be “primary” to work at one’s best.

“We owe [WeWork] a debt of gratitude in that they have shifted how people look at office space and now that they have done that there is room for people to create different types of spaces,” Mr. Orenstein told Commercial Observer. “We’re trying to create something that feels a little more up-market, something that integrates health and wellness and puts those kinds of amenities within arms reach.”

Ms. Skye Hain, who was head of community at WeWork and oversaw the company’s operations, left 14 months after the company got off the ground in 2010, after she signed 275 different members into the first two New York City locations. She exited WeWork to write a cookbook called I Love Corn and join a sales team at The Corcoran Group. Mr. Orenstein, who was director of development and led the in-house construction and design team, departed WeWork a year after Ms. Skye Hain in 2012 for the fashion industry, joining Kate Spade.

The pair stayed in touch over the years and reunited after Ms. Skye Hain received private funding (she wouldn’t disclose the exact amount) to open multiple Primary locations. Just like old times, Ms. Skye Hain heads networking and marketing for the company, while Mr. Orenstein leads the design and construction effort. Construction is in full swing for their first location at 26 Broadway, also known as the Standard Oil Building, at the corner of Beaver Street and is slated to wrap up ahead of a May 1 opening.

In keeping with its focus on health, Primary’s first location will feature a 600-square-foot fitness studio for up to 20 people with more than 30 yoga and meditation classes a week from contracted instructors. It will come with showers, bike storage and changing rooms. Off-site activities, such as bike rides and runs will be commonplace as well. In addition, there will be green walls of moss, ferns and palm-type plants throughout the office—allowing fresher air.

Primary’s Chief Wellness Officer Brian Hain (Ms. Skye Hain’s husband), who was a triathlon coach for a decade, will curate healthy snacks and is responsible for negotiating catered lunches from Dig Inn and fresh juices and smoothies from Pure Green and Lulitonix for the kitchen area. A barista serving Stumptown Coffee Roasters will be on staff, as well.

At max, the 25,000-square-foot Primary location, which has about two-thirds of the entire eighth floor, will be able to accommodate up to 170 businesses and 324 personnel; that breaks down to open sections of the office with long, school cafeteria-like desks for more than 100 individual workers. The rest of the area will be divided up into private offices and suites for up to 10 people, as well as four conference rooms, including two large ones for 12 and 14 people each.

Since Primary’s message is health, the space will feature a wing for businesses dedicated to such ventures, like acupuncture and massage therapy.

“The idea is you’d be able to pop out for a massage at lunch and then go back to work,” Mr. Orenstein said.

Primary’s pricing ranges from $150 to $7,000 a month and is packaged with access to health classes and other amenities. While the base $150 fee offers unlimited fitness classes, it has just one-day of coworking in the open-seated area.

“We want people to be tapped into the network,” Mr. Orenstein said about the base fee. “One of the big things aside from the gym membership is you become part of the network.”