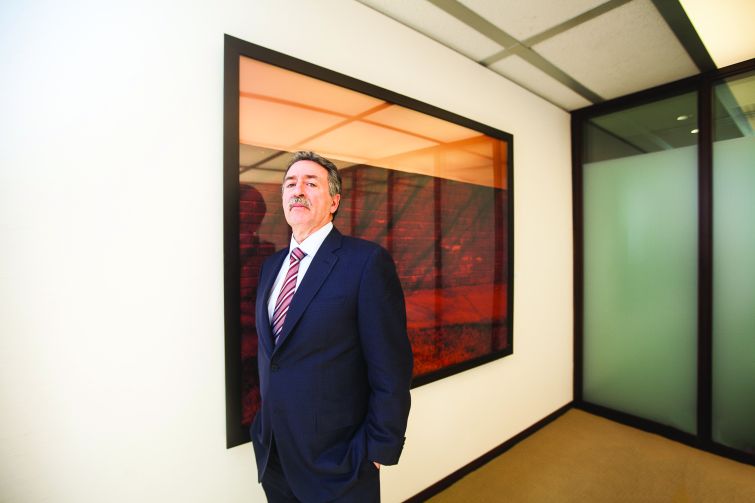 Jonathan Mechanic is something of a walking version of the Real Estate Board of New York’s diary and manual, an annual directory of every real estate player and company in New York City. Mr. Mechanic, 63, knows just about every deal and everyone who’s anyone in the industry as head of Fried, Frank, Harris, Shriver & Jacobson’s real estate group.

At the mention of a project’s location, Mr. Mechanic can tell you who’s developing it, what the address is and—in many cases—what part of the deal his team had in it, regardless of whether or not he even personally worked on the deal.

To pull from his well of anecdotes, Mr. Mechanic has represented Coach in its office condominium purchase at Related Companies and Oxford Property Group’s 10 Hudson Yards and has been the developers’ lawyer for every other lease at the 52-story tower on the Far West Side. More recently, he represented CWCapital Asset Management in its sale of Stuyvesant Town-Peter Cooper Village to Blackstone Group and Ivanhoé Cambridge that closed in December 2015 for $5.46 billion, according to property records. It was familiar territory for Mr. Mechanic, who negotiated the 2006 sale of the multifamily properties to Tishman Speyer and BlackRock for $5.4 billion. Not to mention that  he helped negotiate the 2014 legal dispute between the lenders on the property, which ended with CWCapital controlling the 11,232-unit complex.

Mr. Mechanic, who sports a trademark mustache and an easy (and sometimes raucous) laugh, is the father of two sons, ages 21 and 25, and grew up in Paterson, N.J., but now lives in the East Village. The family also owns a home on the East End of Long Island. He splits his work time between Fried, Frank’s offices Downtown at 1 New York Plaza and in Midtown at 375 Park Avenue, where Commercial Observer met him last week. He joined the firm in 1978 after graduating from New York University Law School and spent four years there before going to developer HRO International, where he spent another five years as general counsel.  He returned to Fried, Frank in 1987 and became a partner.

As of earlier this year, Mr. Mechanic represented News Corp. and 21st Century Fox in their planned move to roughly 1.5 million square feet to anchor Silverstein Properties’ 2 World Trade Center, a deal that didn’t go through but one that Mr. Mechanic still called amicable. He discussed this transaction with CO along with how Fried, Frank gets so many clients and his involvement in the academic world. Since 2009, Mr. Mechanic has taught a real estate course on Fridays at Harvard University, and this week will receive the prestigious alumni award from NYU, his law school alma mater (he went to Brandeis University for undergrad), and will be appointed the chair of NYU’s Furman Center for Real Estate and Urban Policy.

Commercial Observer: What was the citation for why you’re receiving the award?

Mr. Mechanic: It’s just contributions to the industry, to the legal community. John Sexton, who is the former dean of the law school and former president of the university, is also getting an award that day. I figure I’m in very good company. I’ve just undertaken to become chairman of the Furman Institute for Real Estate and Urban Policy, which is the think tank that is associated with NYU. That’s all coming at the same time.

Can you run us through some of what your responsibilities will be as chair of the Furman Center?

The Furman Center has traditionally been an academic organization that’s looked at some of the issues that are of concern to us today. Not just in New York City, but elsewhere, the issues [are ones like] affordable housing. We’re obviously struggling today—421a was a key tool and a key component in creating affordable housing. Because of some disagreements between a variety of governmental officials, there is no 421a today, and I think everyone agrees that there should be. And as a result, basically, somebody hit the pause button on creating new rental housing. That’s not in anybody’s interest. [Someone had] the notion that you could still create affordable housing and impose higher wage rates, which in fact increase the costs. You can’t do everything.

In your line of work, how often are you working with these deals where there might be something like 421a or a property tax abatement?

Obviously, I’m not doing it in commercial deals. But on the residential deals, you’re trying to do it with a 421a tax abatement, otherwise you’re simply building condominiums. You’re not doing rental housing, you can’t afford to. You can’t get the loan to pay because the economics don’t work.

How does it work when you first represent someone on a deal and show up later to a closing table across from that client with another client on a different transaction?

It’s actually very helpful. First of all you have a great deal of credibility with all sides. People know that you’ve been to the movie before. It’s not your first rodeo. Consequently, on a deal we’re doing now, we’re representing a 300,000-square-foot tenant. We accomplished in hours what I had done with another owner who was, I would say, less practical. We had two meetings; it was almost an hour and 15 minutes. We went through the entire term sheet. The businessperson, who was with me, after the meeting came out and said, “That was unbelievable.”

Does that happen a lot?

I think 80 percent of the deals that I do I’m representing the person on the other side of the deal someplace else [first]. In fact, in a circumstance now, I’m representing a law firm. Originally they were looking at a Related site, and they were looking at another site. Because I represented Related on so many things they said, “Oh, well, maybe we’ll use you on the other site, and we’ll use somebody else on the Related site.” Then I spent a lot of time with them on the non-Related site, and now it looked like​ the focus was shifting to the Related site, and the guy called me and said, “We’ve thought about it, and we’re okay with conflict.”

How do you get so many clients?

One, I think we’re actually pretty good at what we do. I think we’re a very business-oriented practice. You’re not going to see our people focused on the stuff that doesn’t matter. They’re going to focus on the stuff that matters. And they’re also going to focus on finding solutions to things. Anybody can say, “Here are the 4,000 problems with this transaction.” You don’t have to be a genius to do that. The genius thing is to say, “Here are the 4,000 problems with this transaction; here are the 3,922 that don’t really matter; here are the ones that matter and here are the solutions that I would propose to get done with it.” Then you’re actually doing something, and I think that’s what we do.

Can you discuss representing CWCapital in the recent Stuyvesant Town sale and compare it to the 2006 transaction?

It was different. There had been a disagreement amongst lenders. I helped mediate a result in that because I had friends on both sides of it. I wasn’t involved in the dispute. I just was involved in resolving the dispute.

We signed an agreement settling the dispute between them, and then I became co-counsel…and worked with them on the sale. I was helpful in reaching a resolution. And I have a great relationship with the Blackstone people. I think [Blackstone’s Global Head of Real Estate] Jon Gray is a star. Blackstone did a great job in terms of touching all the bases: the political bases, the tenant bases, the governmental bases. They raised the capital, and they put together a deal where it was all consensus. It was really important to Jon and to Blackstone that there be consensus.

You were involved in the potential deal at 2 WTC for News Corp. and 21st Century Fox.

Everybody at the table I thought acted in a smart, creative way solving problems. It went from a Sir Norman Foster design to a Bjarke Ingels design. I think everybody on the team—on the Silverstein side, the 21st Century-News Corp. side and the CBRE people—was awesome. But at the end of the day, someone’s got to decide if they press the button and go. And they decided not to do that. But it was a lot of fun, and it was a real challenge.

When all of the documents are signed, wherever they decide to stay long term, then we’ll know. But for the moment they’re not proceeding with that.

When did you find out that they weren’t going through with the deal?

When somebody told me [laughs]. It was a surprise. We were well down the road.

Are there any other potential tenants now?

I figure the likelihood of me representing the next potential client is probably pretty good. I know an awful lot about that building. Let’s say that I have a great leg up on anybody in the world who is negotiating to try and take space.

When you go up to Harvard to teach on Fridays, with everything else that you’re working on, how do you make that day work?

I have the two other Jon Mechanics that are my clones. One of them stays in the office, and one of them goes out and sees other clients. And that way it works. If it were only one of me, it would be impossible.

I took a sabbatical this year, and by the way, this year was so busy it was the best thing I ever did. Because you know what, at some point there aren’t enough hours in the day.