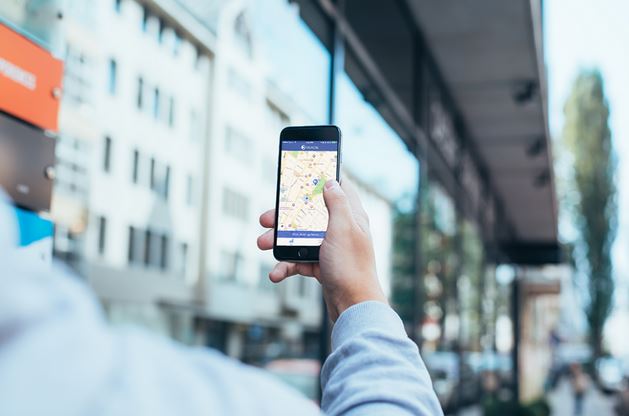 Falkon in the field (Photo: RE:tech).

Falkon, the app meant to help brokers get instant building data in the palm of their hands, has officially left the nest and has spread its wings in the real estate world.

The former iPhone-only program ended its test run in beta mode about a month ago and is now a full-fledged service that includes a new desktop platform and the ability to canvas a neighborhood, its developer’s top executive told Commercial Observer. So far, it’s garnered interest in using and input from leasing and sales brokers from firms such as ABS Partners Real Estate, Cushman & Wakefield and Avison Young.

“What separates us from everyone else is first and foremost we are a platform created by brokers for the brokerage community,” said Ashkan Zandieh, the founder of RE:Tech, which developed the service. “All we’re aiming to do is connect people to people.”

So what makes this stand out from say CoStar Group or Reonomy? Mr. Zandieh, who worked at ABS before venturing into the tech world in June 2014, said Falkon’s niche is that a broker can pull up a building on the app, see who really owns the building (not just the LLC) and how to contact the landlord all on a smartphone.

Falkon launched in a trial mode last June solely on iOS—the software used on iPhones—as the Observer reported at the time. Brokers such as James Nelson, who does investment sales at C&W, used the app during its trial run and gave input on what works and what could be expanded upon, Mr. Zandieh said earlier this week.

One of the big takeaways was developing an expanded web platform, he added, that would allow a brokerage team to canvass availabilities in an entire neighborhood. Falkon now also features a property’s zoned floor-to-area ratio and the maximum buildable of what that metric could be as well as what it currently is built as.

“Some people wanted more information,” Mr. Zandieh said of the web aspect. “The reason we were mobile first was we wanted a light tool to get all the vital information down to one place.”

Mr. Nelson said being able to block out a particular part of a map, pull building information on that patch and canvas it all in a streamlined process has been particularly helpful. He declined to say whether using it has led to particular sales.

Now that’s it’s out of beta, Falkon now boasts 6,000 subscribers in the real estate industry, Mr. Zandieh said. Mr. Nelson and his 10-member investment sales team are a part of those, and he said it’s more streamlined than other property searching platforms in the market. Instead of jotting down an address, heading back to the office and researching a property, Mr. Nelson said he has all the information at his fingertips right when he’s out on the street.

“It’s very clean, very easy to use,” he said. “There’s no substitute when you’re out on the street and you’re just seeing so much more.”