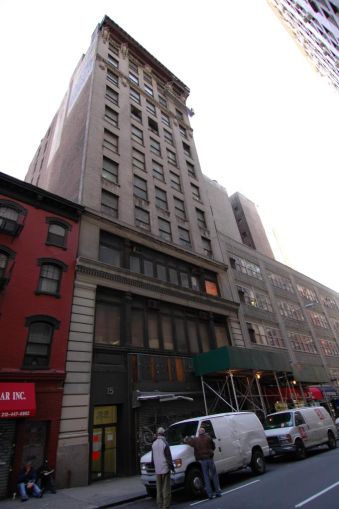 Commercial Observer has learned that the company will occupy the entire third floor of the 11-story office building between Broadway and Fifth Avenue. The asking rent in the deal was $65 per square foot, according to a spokeswoman for Kaufman Organization, the owner of the ground lease at the site. Barstool Sports is expected to take the space this summer.

“We thought [Barstool Sports] would be great for the building, because it’s really young and fun,” said Michael Heaner, who represented Kaufman in-house with colleague Elliot Warren. “They like the building because of the way we have repositioned it.”

Barstool Sports will set up a newsroom with live-streaming cameras in its new digs. In January, the Massachusetts company’s founder David Portnoy announced it was leaving its home state of more than a decade for New York, as The Boston Globe reported. Mr. Portnoy also sold a 51 percent stake in the company to The Chernin Group for a price between $10 million and $15 million, as the Globe reported.

“They gravitated towards this neighborhood, because it is centrally located and they deemed it accessible for their team and to the various talents that they work with,” said Jeff Sharon of ABS Partners Real Estate, who represented Barstool Sports in the transaction.

Along with 13-15 West 27th Street, Kaufman signed 99-year ground leases for 119-125 West 24th Street, 19 West 24th Street and 45 West 27th Street in one deal with property owner Extell Development Company for a price between $175 million and $200 million, as CO previously reported. The properties were part of the “Ring portfolio.” In an unrelated deal, Kaufman secured the ground lease for another Ring portfolio property from Extell at 155 West 23rd Street last year for $45 million.

Since acquiring the five properties, Kaufman has spent $33 million to gut renovate them, revitalize the lobbies, add new elevators and install new artwork.