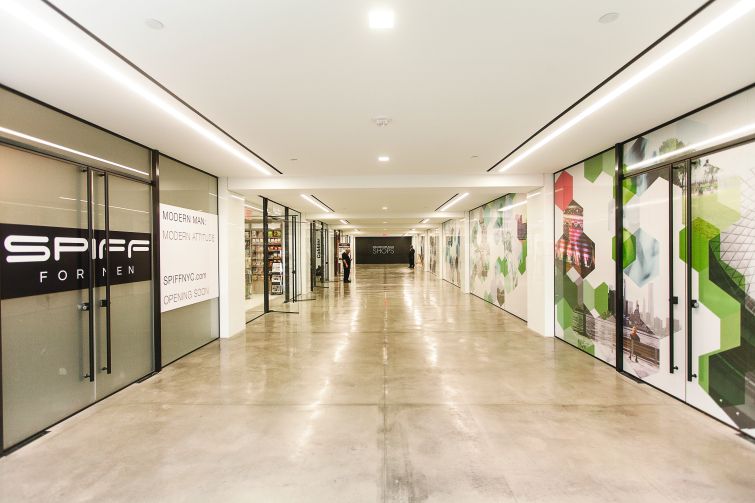 Sometimes a little Starbucks or Subway kiosk in the lobby is a nice little perk for a building’s tenants. But when you’re Downtown—and the amenity is a big batch of new retail space—it winds up being a boon well beyond one landlord’s property lines.

Brookfield Property Partners wasn’t thinking about creating a big wave in the neighborhood, per se, last year when it redesigned 40,000 square feet of office space on the concourse level of its 2.6-million-square-foot 1 New York Plaza, where Revlon, Morgan Stanley and Fried, Frank, Harris, Shriver & Jacobson have offices. It just wanted some nice lunch options and maybe a gym or salon for the tenants in the building.

But it got a firsthand taste of the hunger for quality retail.

“What we found is when you came here in the winter, at least half the customers were wearing jackets,” said Kenneth Hochhauser, a broker with Winick Realty Group, which is marketing the space for Brookfield. “So they are walking from a distance to come here; it’s not just servicing this building.”

Brookfield wound up renovating an additional 8,852 square feet of space on the concourse level for even more retail. The asking rent is $75 per square foot, and they want something that will complement the current stores their now, which include a Starbucks, Schnipper’s Quality Kitchen, Chipotle Mexican Grill, Chop’t, Naya Express and Cappone’s Salumeria. Each retailer has lines out the door during lunch and morning rushes. Brookfield is targeting an Asian restaurant or juice bar as possible tenants.

In terms of non-food options, there is also a 17,000-square-foot Retro Fitness gym—the first in Manhattan—Cobbler Express shoe shine store, an eyeglasses shop called Optometric Arts and Spiff For Men barbershop opening soon. Brookfield is considering leaving a space for a salon to balance the gender service offerings.

Prior to its makeover, the building’s concourse level housed building management offices, an art gallery and a Dunkin Donuts, and the hallways were about twice as wide. It was due for a revamp in Brookfield’s eyes.

“It really wasn’t an amenity for the building or for the Water Street corridor,” Mark Kostic, a Brookfield vice president, said during a tour of the space. “You weren’t going out of your way to come down here.”

When Superstorm Sandy hit in 2012, it flooded and wrecked the concourse. The landlord’s plan to renovate the level was hastened, Mr. Kostic said. The $14 million renovation began in 2013 and was completed last year. Retailers gradually opened throughout the year starting with Starbucks and Chipotle in the spring.

With the redesign of the concourse, Brookfield made some safeguards for future storms, such as moving electrical equipment on upper floors in the 50-story building. They also offer flood insurance plans for retailers there.

Although the concourse is not visible to street level, it has become popular thanks to limited retailers in the area and word-of-mouth, Mr. Hochhauser said.