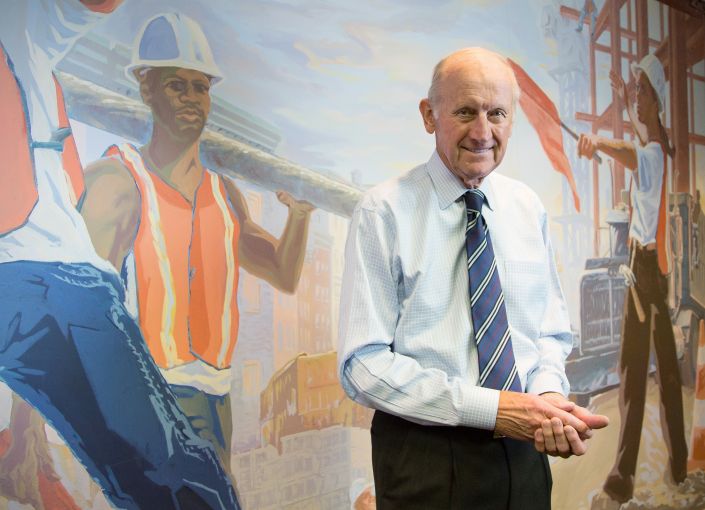 When Richard Anderson took over as president the New York Building Congress in 1994, construction spending in the city stood at around $10 billion. Even with inflation, that’s paltry next to the $40 billion that’s expected to be spent this year between residential, commercial, entertainment and public works funding.

There’s probably no better time to leave the construction advocacy organization than on such a high note, which Mr. Anderson, 75, will voluntarily do later this year. Mr. Anderson is starting his own firm consulting with business groups and developing corporate strategy. (He already has one client lined up: the Building Congress).

The longtime urban planner sat down with Commercial Observer late last month to discuss the state of the building market, the need for infrastructure investment and his 22 years of leading the Building Congress, which has about 400 organizations as members.

Commercial Observer: Could you explain your organization’s role in the construction industry?

Mr. Anderson: The Building Congress is a membership organization serving the entire design, construction and real estate community in New York City. So we focus on things that they would like to have happen. We focus on things that they have in common. We don’t get into just labor issues, just contractor issues, just architect issues, just engineer issues. The things we get into are things that affect the entire industry such as rezoning, such as infrastructure, some of the economic development initiatives. Some of the other associations that deal with just a piece of the industry, they’ll be much more focused—we’re more broad brush.

The New York City construction market is at a peak. We are probably as busy as we’ve ever been. And a lot of change is underway.

What sort of change?

This group is not the old white guys anymore. There are a lot more minorities. There are people who are coming from all over the world. And they are bringing lots of different skills. Technology is a much bigger piece of the industry. Innovation is occurring. Government is involving itself ever more with significant cost increases.

One of the overarching things you hear is that the cost of construction keeps escalating. What’s driving up the cost?

Government involvement in the construction process is ever increasing. The [city] regulation [that] you’ve got to shut down a job when winds are an average speed of 20 miles an hour—it used to be 30 miles an hour—that has significant cost implications. They’re not reducing costs in any way. They’re only adding to them.

The governor has a bill that would create a three-person review panel for major public construction projects. He’s aiming that, of
course, at the [Metropolitan Transportation Authority]. And that’s just going to add to construction costs.

Have you advocated to City Hall about what the crane regulation might have on the construction industry?

They have not reached out to us. Nobody in the industry has been consulted, absolutely not. I don’t know when they expect to talk to us, or if at all. It was surprising. A major issue like this has not happened. When there were crane problems in the past, such as under [Mayor] Mike Bloomberg, we were always called in. I remember once canceling a trip because I was summoned to City Hall to talk about this [in 2008].

That’s interesting that they wouldn’t reach out to anybody with all the discussion of all the construction-related accidents that have been going on.

Well, and talk to people with expertise. We were very surprised and disappointed.

Gov. Andrew Cuomo had all of these proposals come out in the last year for infrastructure investment, which are expected to cost a combined $100 billion. Do you have any thoughts on how he’s going to fund this?

It’s going to be a mixed bag. The encouraging thing is that he’s proposed these things. This is a breath of fresh air.

What we need is an ongoing process to generate a continuing source of projects like these and in effect a New York State capital budget and an economic development program, not just a big burst every once in a while.

If you had to pinpoint one of those projects—

There’s one that’s this far above all the rest.

Gateway [the high-speed rail corridor between New York and New Jersey]. Because Gateway is at the same time enormously important to ensure the resilience and the redundancy necessary for the regional transportation system. It opens up more economic development than any other single project. It provides hundreds of thousands of potential workers from New Jersey to staff jobs in Manhattan.

It’s been the one everyone is discussing the most.

Well sure, because when Gov. Chris Christie killed that project, that was the worst public decision that I’ve ever heard of. He’s trying to explain it away by saying it wasn’t well designed, it wasn’t well planned and all that. You can debate that, but there’s no debating the importance of the project.

Government spending is down in the last couple of years.

I wouldn’t call it down, but it’s flat. Relative to private [spending], it’s down considerably because the private has grown so much. In 2009, the weakest part of the private market, public work was 62 percent of all construction activity. Now it’s down below 40 percent.

In the private sector spending, is it more residential or more commercial?

The huge, huge increase is residential. Office building is at a 25-year high, but relative [to residential] it’s not that high. Residential has never been stronger in New York City.

In 2016, the forecast is that the city is going to hit $40 billion in construction spending.

We’re hitting $40 billion this year, and we expect another $40 billion [next year]. We’re going to stay around $40 billion for three years in a row.

What are we looking at beyond that?

That’s the big question mark. Because things like the office and the institutional [markets] will probably hold up for quite a few more years. Residential is [another] big question mark, because that is so cyclical. But I don’t think we’ll see the dip we saw from 2008 to 2009, when we went from 33,000 [new units] to 6,000 [units]. This year could be close to 40,000 units. It might even be off a little bit, but it’s not going to go to 5,000 [units] in the next few years.

Do you think the mayor’s affordable housing and rezoning plans will keep the creation of units steady?

Not by themselves. It’s not that much. Look, he’s trying to average 8,000 new units a year. Now 8,000 new units is what? One-fifth of what we hope to get this year. This construction market is not going to be significantly impacted by the affordable housing program.

I heard you don’t like the term “state of good repair.”

Yeah, because it’s defeatist. If you simply pursue a state of good repair, you’re playing catch up; you’re not dealing with the future. So no, it’s not the right term. You’re filling potholes and fixing leaks. You’re not building new systems.

How did you get into the construction business?

I started out working on construction jobs as soon as I was 16 because my father was in the business. When I went to college [at Rutgers University], I started in engineering school, and then I met calculus. After being an honors calculus student I said, “If this is what I have to go through to be an engineer, I don’t want to be a civil engineer.”

I went into economics and urban planning. Then I went to graduate school and got an urban planning degree at Cornell University and came to work in New York. I worked for a planning organization: Regional Planning Association for over 25 years.

Then I went to Dallas and did this couple-of-year project called the Dallas Plan, charting a future for Dallas. But my heart was in New York, and my family was in New York. When the Building Congress job opened up, I applied. That was 1994. Then when we got here, we had an organization that really had more than a 70-year record of bringing the industry together. It was in a weakened state, but the concept was good.

What I had to do was reestablish it. The thing I always said, which made it relatively easy, was we had a natural constituency. The New York City design, construction and real estate industry wanted and was willing to support a Building Congress as long as it was one that was working in ways that it would be attracted to.

We emphasized participation and people coming to committees and events and working together and being advocates for industry-wide positions. It worked like a charm. The thing we de-emphasized was membership dues. Until this year we hadn’t raised the dues in 25 years.

What brought the dues up this year then?

Why did you decide to step down at the end of this year?

I looked at it and said, “What would be best for the Building Congress and what would be best for me?” In effect, I was making a transition plan for both of us. I could certainly justify staying several more years, but then what position will I be in to establish my own firm, which is what I’m doing. I’ve already got some tentative clients, one of whom will be the Building Congress.

I’m going to be 76 this year. If I wait until I’m 80, then how employable am I? How long will the board be comfortable with somebody who’s 78 or 80 or 82? It’s a judgment call, but it was nothing to do with performance.

What’s your firm going to focus on?

It’ll be advisory services. Firms that I know well that want me to be on their board of advisors, board of directors to help them with corporate strategies, government contracts, advice on different things they do, where they make contributions. I don’t think I’ll do lobbying or business development. I’m not really interested in getting down and begging for money. I’ve done enough of that.