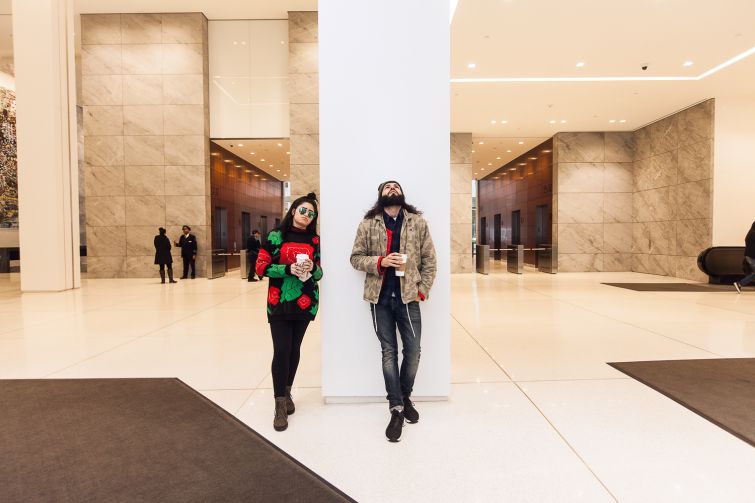 NOT-SO-COOL LOBBY, BRO: With millennials heading to amenity-heavy buildings to the south, Midtown landlords are trying to keep them in the business district (Photo: Emily Assiran/Commercial Observer). Lauren Elkies Schram

How do you keep the kids at home?

That is a question some Midtown commercial landlords are asking themselves as they face stiff competition from the owners of amenity-laden younger office buildings in other submarkets.

“That might be something that Midtown proper is having—I’m not saying an issue with—but there is concern with,” said Hal Stein of Newmark Grubb Knight Frank, at last week’s Real Estate Board of New York members’ luncheon. “I think all of the other markets have built up their environment.”

But some owners are starting to think outside the box—the glassy, Midtown office box.

“You’re starting to see landlords in Midtown try to start to cater their buildings a bit more to that millennial group, converting lobbies, making them more like lounges, having cafés in the lobbies, making sort of these, if I can steal the words from the architect ranks, having these ‘areas for accidental collisions,’ ” said CBRE’s Sacha Zarba, who was also on last week’s REBNY panel. “We’re starting to see that to a much larger degree in Midtown I think because it speaks to what tenants are looking for, what the younger demographic is looking for which is not just to stay inside.”

According to the mid-2015 United States Census Bureau, millennials, those folks between 18 and 34, number 83.1 million, representing more than one-quarter of the nation’s population.

Aby Rosen’s RFR Realty tapped Studios Architecture to transform the 90-year-old, 530,000-square-foot office tower at 285 Madison Avenue between East 40th and East 41st Streets, with a $65 million gut renovation completed in December 2015, as previously reported by Commercial Observer. He outfitted the building with fun perks like a rooftop terrace, a recreation room with a Ping-Pong table, a tenant lounge, a gym with showers, a grab-and-go café and kitchen and 50-slot bike storage.

The upgrades would provide “the ideal work/play environment to the dedicated employees of our tenants,” Mr. Rosen said in an October 2013 news release in advance of the renovations.

Of 100,000 square feet of leases that are out at the building, 20 percent are for tenants that were mulling a lease in Midtown South or Lower Manhattan, according to AJ Camhi, a senior vice president at RFR. “So the renovation really paid off,” he said. The other 80 percent are tenants considering other Class A Midtown buildings, and again, the amenities are what are winning them over.

And it’s become a case where it’s not just millennials who want these perks.

Thomas Durels, Empire State Realty Trust’s executive vice president and director of leasing and operations, said his company, which owns the Empire State Building, among other towers in the Times Square South area, is upgrading buildings for all tenants, not just millennials.

Plus, the building has a tenant-only conference room and seven on-site food and culinary options, including the world’s first Starbucks delivery service. Mr. Durels touted the advantage of sitting at your desk, ordering a coffee on your phone and then, five minutes later, it showing up at your desk.

Zachary Freeman, the vice president of leasing at Equity Office, said his company is adding a 20,000-square-foot amenity space at Park Avenue Tower, but it’s not exclusively geared toward millennials. Equity Office believes established tenants want these amenities, too.

“Due to location [on Park Avenue] we feel as though the likely tenants here are well-heeled financial-type firms, whether it be an international bank or a hedge fund,” Mr. Freeman said.

At Park Avenue Tower at 65 East 55th Street, Equity Office is pumping $25 million into renovating the Midtown building to include a 20,000-square-foot amenity space below grade called “The Club,” which will have a fitness center with locker rooms, recreation lounge, grab-and-go food service and conference center. In a new outdoor plaza, the landlord, a unit of Blackstone Group, will have an art installation and possibly bar/café. The job should be completed by December. The lobby technology will be upgraded to include hotel concierge-like security guards armed with iPads to welcome guests.

While Equity Office is not bringing the amenities of youth to 5 Bryant Park, it is to the building next door at 114 West 41st Street, where VTS, a leasing and asset management platform, recently took 15,769 square feet. The renovation there, slated for completion in mid-May, will include shared common space on the ground floor with a billiards table, company spokeswoman said.

“Our repositioning of the building is resonating strongly with growing companies who value cutting-edge office space and amenities for all,” Mr. Freeman said.

But, a few spots with exposed brick and high ceilings aside, the mature Midtown submarket has been slow to incorporate the sense of environment that Midtown South and Downtown buildings readily integrated.

“Legacy owners are slow to uptick on things that millennials are interested in,” said Grant Greenspan, a principal of Kaufman Organization, which owns and manages Class B Manhattan buildings south of 42nd Street. “From a building perspective, for some of the owners it’s hard to quantify, am I going to rent space quicker if I do an x, y and z space?”

Kaufman has focused more on upgrading technology, including providing a redundancy on multiple forms of bandwidth as well as an owner-instituted protocol for accessing the Internet besides a riser. That’s the most important amenity for millennials, he said, who haven’t requested Ping-Pong tables or any other such games.