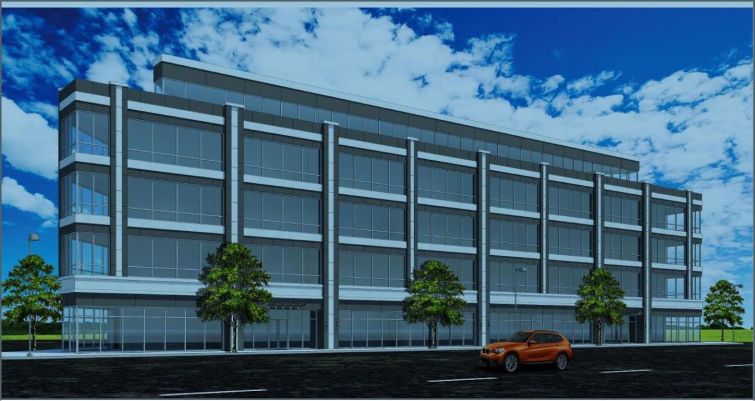 Queens-based developer RJ Capital Holdings is planning to construct an office building on a Queens block, despite local pushback about the displacement of the popular Ohr Natan Synagogue.

The landlord has begun marketing office space in the would-be 100,000-square-foot mixed-use building at 98-81 Queens Boulevard in Rego Park with CBRE, and has released a rendering of the development—although plans have yet to be filed with the New York City Department of Buildings. The glassy project will be five stories with underground parking, according to CBRE. Office asking rents start at $50 per square foot.

“There is a demand, because there is no new space out there,” CBRE’s Roy Chipkin, who is marketing the property, told CO. “This is unique in particular because you’re near the subway line, you have the buses and you have underground parking.”

The landlord is in early negotiations with two hospitals to anchor the building, Mr. Chipkin said. RJ Capital is thinking of allocating the first, and possibly the second, floor for retail. Rudolf Abramov, a principal of RJ Capital, did not return calls seeking comment on the project.

Ohr Natan Synagogue, which is visited weekly by more than 1,000 people—most of whom are Russian Bukharian Jews—originally signed a lease to occupy 98-81 Queens Boulevard in 2001 for the house of worship and community center, which distributes free food and provides English classes. Its current lease is set to expire in February 2017, according to Rabbi Nahum Kaziev, who heads the synagogue and community center. Prior, the property was home to Trylon Theatre, which closed in 1999, as the New York Daily News reported.

The synagogue spent $2.1 million renovating the building and bringing it up to code with new sprinklers, handicapped entrances and bathrooms as well as an air conditioning system and lighting, Mr. Kaziev said. The construction took roughly five years.

RJ Capital, operating as Trylon LLC, took the synagogue to Queens Civil Court in 2014 to evict the tenant, claiming that it hadn’t paid a month of rent. Judge Terrence O’Connor dismissed the case as the synagogue did make the payment, as DNAInfo reported.

Mr. Kaziev said he has spoken to Mr. Abramov recently, hoping to get the developer to build around the synagogue, but negotiations have broken down. The synagogue does not have a plan for a new home yet.