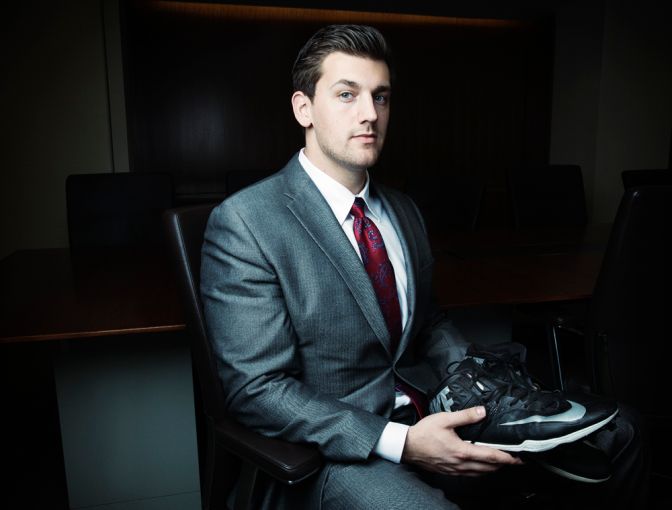 Say the words, “Suit up,” to Steve Maneri, and the NFL tight end might reach for his Jets uniform, or he might go for something a little more Brunello Cucinelli.

Mr. Maneri is starting his rookie season with Colliers International, following five years on the gridiron.

Mr. Maneri, 28, who most recently played for the New York Jets and New England Patriots (by his reckoning, his best year was with the Kansas City Chiefs in 2012) is the latest pro athlete to join the ranks of pro real estate. What lured the 6-foot-7, 265-pound Temple University graduate into real estate?

“The competitive nature of it,” Mr. Maneri told Commercial Observer. “There are a lot of highs and lows—and that’s another thing that really attracted me.”

It’s an exclusive club—brokers who once worked as professional athletes—but not quite as exclusive as you might think.

Sometimes the athlete looks to a post-pro career in real estate because of the less hectic hours of life on the road than if he became a coach, according to former New York Giants tight end Howard Cross, who wanted to spend more time with his twins when he retired in 2002. But there’s also some symmetry between the personalities of the athlete and the broker.

“What I will say about athletes is, if you are a successful athlete, it means you are a grinder,” Mr. Cross said. “The things that made you a great athlete should make you a great broker.”

Mr. Cross moved up the ranks at CBRE, then Colliers, before landing at Cresa New York where he is a principal. (He also assembled a tidy portfolio of buildings that he personally owned during the course of his 13-year football career, which he sold but declined to say anything more about.)

It’s important to build a network and get “a rabbi [or mentor] that can stand beside you,” said Mr. Cross, who possesses the greatest of sports trophies: a Super Bowl ring from his 1990 season with the Giants. (His is not the only Super Bowl ring one sees around a closing table. Roger Staubach, a two-time Super Bowl champion in 1971 and 1977 and Hall of Fame quarterback for the Dallas Cowboys, is an executive chairman at JLL. Alas, his colleague, former Giants kicker Josh Brown, who recently joined JLL, has no ring.)

This phenomenon of athletes-turned-real estate pros extends well beyond the New York real estate market. Avison Young’s Steve Dils, who was a quarterback for the Minnesota Vikings, Los Angeles Rams and Atlanta Falcons, opened the firm’s Atlanta office in 2010 as the sole employee. The office has ballooned to more than 100 people today, 28 of which are brokers, according to the company’s website. Hall of Fame running back Emmitt Smith, formerly of the Dallas Cowboys, owns a package of real estate companies in Dallas, including development firm ESmith Legacy, general contractor EJ Smith Construction, lender E Smith Capital Partners and brokerage E Smith Realty Partners. And Mr. Staubach, who founded the brokerage The Staubach Company in 1977, had more than 68 locations around the country before he sold the firm in 2008 to JLL for almost $660 million.

“They didn’t pay quarterbacks back then what they do today,” Mr. Staubach said about why he got into real estate. “I was really preparing for life after football. I didn’t know how long I would play. I missed football, but I knew I would have a longer life outside of football.”

Of course, real estate doesn’t only draft veterans of the gridiron. Professional hockey player Lyon Porter, who played for the Adirondack Frostbite, the Syracuse Crunch and the Richmond Riverdogs, works in residential real estate for The Corcoran Group. And in April of last year, Henry Fuentes, who played professional baseball for three years with the Big Ben Cowboys and El Paso Diablos in Texas and Las Cruces Vaqueros in New Mexico, joined Avison Young’s New York City office. Prior to Avison Young he worked for the Kaufman Organization.

Mr. Fuentes said one shouldn’t be fooled into thinking the transition is easy. “In this industry you have to stay persistent and positive in the sense that, if you make 10 cold calls and you get one deal from the 10, that’s really good,” Mr. Fuentes said. “You have to work hard. It’s not easy, but with hard work you will see success.” Hey, baseball could help a guy relate, since getting three hits out of 10 at bats is considered great.

It’s not just adjusting to a broker’s low batting average of deals-per-call that the professional athlete must adjust to—there are also unfamiliar inter-team dynamics.

“When you played [sports], you were playing for your teammate,” Mr. Cross said. “You are competing for a single goal and you are spending hours together practicing to do that. Brokerages aren’t like that. It’s more like the Olympics. There are all these countries, and you are all trying to win the same medal. And sometimes you are competing against your own teammate.”

Athletes who have transitioned into real estate don’t always wind up as brokers—plenty end up on the ownership side. Basketball legend Magic Johnson is probably the best example of this, but the American League MVP first baseman, Maurice “Mo” Vaughn, founded the real estate company Omni New York in 2003—which oversees 12,000 housing units around the country—and still plays an active managerial role today.

Mr. Vaughn advises athletes getting into real estate to “research your market and asset class. Surround yourself with a strong experienced team. Be prepared to pay your dues in the industry, and stay humble.”

Mr. Maneri is just in his seventh week at Colliers, working under Vice Chairman Joseph Cabrera in representing office tenants. (Mr. Maneri declined to name the clients and deals he is actively working on.)

“You’re lifting, you’re swatting twice a week for football for that one opportunity that’s fourth-and-one, and you have a guy that you have to move to get the first down or the touchdown,” Mr. Maneri said. “And in real estate you could come to work everyday and get that one meeting for 100,000 square feet, and if you don’t know what you are talking about, it’s not going to translate to success.”

Just like when he was a rookie in the NFL and following around veterans Kevin Boss of the Chiefs and Matt Light of the Patriots, Mr. Maneri is shadowing Mr. Cabrera and David Glassman, an executive managing director at Colliers, to learn as many negotiating tactics as possible.

And unlike Messrs. Dils and Staubach, who started their real estate careers during their playing years, Mr. Maneri is a true novice. Mr. Maneri, who was born in Saddle Brook, N.J., had been playing football since he was 7 years old with zero plans of getting into real estate.

“I didn’t hang out in the school yard and think, ‘One day I’m going to lease a building,’ no,” Mr. Maneri said.

As his football career was winding down he went to the NFL’s player career development program last year and got an internship with CBRE’s New Jersey office in the offseason, working under associate Todd Ward.

Following the internship, he blindly reached out to dozens of professionals in the New York City metropolitan area and had about 25 meetings. Mentioning that he had played pro football granted him an audience, although he didn’t have much experience.

“I’d reach out to people and get in front of them—and the football [history] helped,” Mr. Maneri said.

Ultimately he crossed paths with Bob Alexander, a chairman of CBRE in the New York City office. What was supposed to be a 15-minute meeting turned into two hours. Mr. Alexander introduced Mr. Maneri to Kimberly Brennan, Colliers’ tri-state chief operating officer, and Mr. Cabrera.

“Steve is a highly intelligent, motivated broker with a passion for real estate, and the drive to succeed in the most competitive real estate market in the world,” Mr. Cabrera said in a statement. “As a member of the NFL, he was competing amongst the elite players in the world. That requires a special kind of talent and work ethic, which is already evident. If Steve can handle the pressure of playing in front of 70,000 screaming fans, it tells me about his poise, concentration and preparation.”

Mr. Maneri is hoping the luster of his being a professional athlete in the country’s most popular game will help open doors for deals, too. He’s just getting started but is enjoying his second life.

“The one thing about this is people keep asking me, ‘Are you tired of it yet?’ ” Mr. Maneri said. “Honestly, I like coming to work every day. Sunday night comes, and I’m looking forward to Monday morning.”

The biggest adjustment? “I have a whole wardrobe of clothes that I don’t touch anymore, because I’m wearing a suit everyday,” Mr. Maneri said.

And now that life isn’t completely about football anymore, he wonders, “When do people have time to work out?”