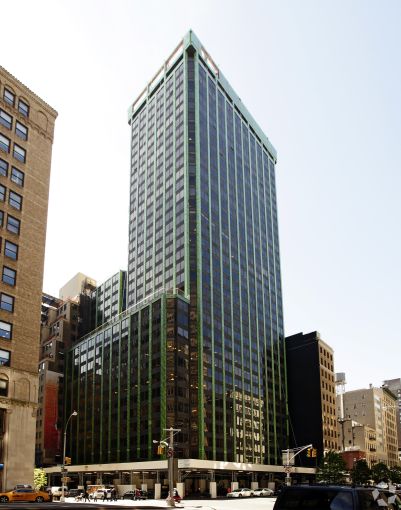 The folks at Sol Goldman Investments know firsthand how complicated ground leases can get, as one of Manhattan’s biggest owners of them.

But it got particularly tricky last week when the firm, which is run by the descendants of real estate mogul Sol Goldman, was hit with a lawsuit and then a temporary restraining order by Cohen Brothers Realty Corporation, one of its land lessees, after they simultaneously attempted to refinance at the same Midtown South property.

Cohen Brothers, which developed 475 Park Avenue South between East 31st and East 32nd Streets in 1970, alleges in a March 18 New York State Supreme Court complaint that the property’s fee owner, Sol Goldman Investments, threatened to terminate the remaining 21 years on the lease as a means to “extract additional payment” from the New York City-based company. Days later, Cohen Brothers secured a temporary restraining order, or TRO, preventing Sol Goldman Investments from terminating the lease. (After the lease expires on April 30, 2047, it can legally be renewed for an additional 25 years.)

“We’re delighted that we got the TRO and that’s just basically it at this point,” Morrison Cohen’s Y. David Scharf, Cohen Brothers’ attorney in the case, told Commercial Observer.

In 1967, siblings Sherman, Mortimer and Edward Cohen of Cohen Brothers entered an 80-year ground lease with a limited liability company affiliated with Sol Goldman and eventually constructed a 35-story, 330,000-square-foot office tower on the site. In the past decade, Cohen Brothers invested $40 million into the property, with upgrades to the building’s lobby and entrance, as well as installation of a César Pelli-designed exterior glass curtain wall, as CO reported.

“César Pelli came in and created a great curtain wall for a brick building, and if you were to drive by that building you would not recognize it today,” Cohen Brothers head Charles Cohen told CO in October 2015.

Cohen Brothers was in talks with its current lender, New York Community Bank, in late-2015 and early 2016 to refinance its leasehold mortgage, according to the complaint. (Most recently, the development firm took a $93 million loan from NYCB on the building in December 2011, according to property records.)

On Feb. 16, Sol Goldman Investments sent Cohen Brothers a request to execute an estoppel certificate and a subordination nondisturbance and attornment agreement (SNDA) because the landlord wanted to refinance its fee mortgage, court records state. An estoppel certificate confirms that a lease is in good order, and an SNDA is an agreement between a tenant, a landlord and the landlord’s lender establishing each party’s rights in regards to mortgages on the property. In this case, the SNDA would allow Sol Goldman Investments’ fee interest in the property to supersede Cohen Brothers’ leasehold.

Three days later, Cohen Brothers asked for an “estoppel certificate” from Sol Goldman Investments, to show the lender that the leasehold was not at risk of expiry. The tenant also provided the landlord with a list of outstanding liens and violations on the property “which in fact had been remedied or were in the process of being remedied,” the complaint indicates.

On March 4, the landlord sent over an estoppel certificate citing six “defaults,” or violations that Cohen Brothers made to the lease, which put Cohen Brothers at risk of its lender believing that the lease was in danger of being terminated.

One of the lease violations was for an “unsafe” report that the building received on May 17, 2013 from a New York City Department of Buildings-sanctioned inspection due to an incomplete façade. At the time, a new curtain wall was being installed on the tower’s exterior, and the landlord allegedly “was well aware of this long-term project, and never previously attempted to claim that it constituted a breach of the lease.”

Cohen Brothers’ attorneys requested a “clean” bill of health because the “landlord was well aware that the particular violations cited in the certificate and the notice were, in fact, either already remediated or in the process of being cured, and that the tenant was capable of curing any alleged violations,” the complaint states. “There was no legitimate basis for the landlord to claim default.”

But Sol Goldman Investments turned around 10 days later and sent another such certificate with the same six defaults listed.

Both sides will face off in court on May 24.
A spokesman for Cohen Brothers declined to comment. Calls to Sol Goldman Investments’ legal department were not immediately returned.