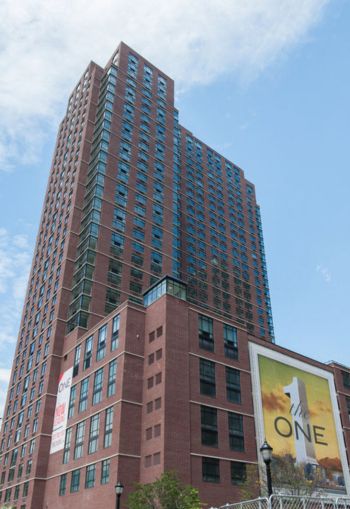 The One in Jersey City. danibalbi

Sometimes you just know it’s the one.

That’s how Lloyd Goldman’s BLDG Management and Ares Management felt about the $165 million loan they landed on The One, a 35-story  multifamily tower in downtown Jersey City.

Cornerstone Insurance & Financial Services provided the borrowers with the permanent loan, which has a seven-year term and a rate of 3.55 percent, two years of interest-only payments with a 30-year amortization schedule, sources have told Commercial Observer.

In conjunction with Urban Development Partners, BLDG and Ares built the 439-unit property at 110 First Street in 2015. The unit mix is studios and one- and two-bedroom apartments. The asking monthly rent for a one-bedroom in the building is $3,550, according to Rent.com. The property also contains access to a rooftop, a movie theater, a children’s playroom, a fitness center, a golf simulator, a fire pit and a pool.

“Given the Class A nature of the asset and the tremendous strength and reputation of the sponsorship, lenders competed heavily for this credit opportunity, ultimately allowing Meridian to negotiate highly favorable terms from a balance sheet lender,” Ms. Shelby said in prepared remarks.

The tower also includes 10 affordable housing units, according to an article from The Jersey Journal.

This could be the tip of the iceberg for Cornerstone and other insurance mortgagors, as regulatory changes and volatility in the capital markets is expected to freeze out other lenders. A number of insurance firm executives explained to CO that they may have an advantage in today’s changing lending environment, especially when it comes to larger deals.

Representatives for BLDG and Ares did not respond to requests for comment. Calls to Cornerstone were not returned by time of publication.