A Richard Experience: For CBRE’s Richard Hodos, Retail Is Changing From Acquisition to Experience 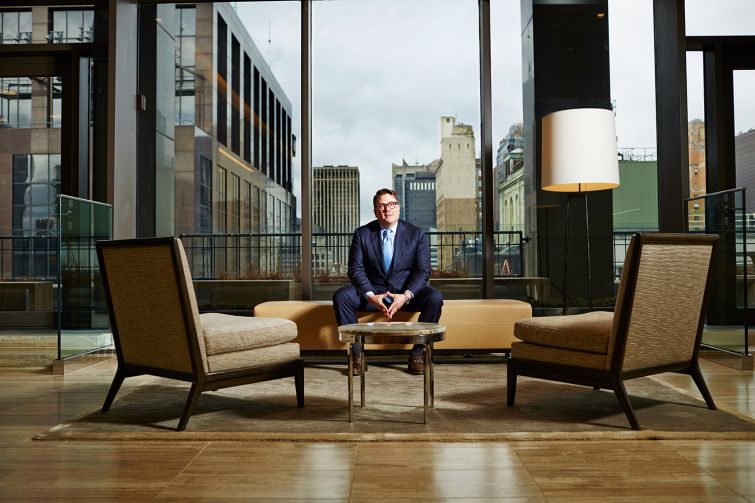 It’s in large part due to the connections he’s forged over the years. For example, he exclusively represents L Brands, the parent company of Victoria’s Secret and Bath & Body Works, a relationship that dates back 26 years to when Mr. Hodos was leasing mall Springfield Town Center mall in Springfield, Va., and he met the person who oversees U.S. and Canada markets for L Brands.

In his tenure he boasts that he has done the most deals in the Time Warner Center for tenants like Coach, Esprit and Cole Haan and the greatest number along Fifth Avenue’s “Gold Coast” for J. Crew, Sephora, Le Maison de Chocolate and others.

About 80 percent of his clients are on the tenant side. He has a roster of a dozen exclusives (most just in New York City), for tenants such as J Jill and Comcast. On the agency side, he is marketing over 130,000 square feet for landlords like Harry Macklowe and Vornado Realty Trust and said he tries “to take on only high-profile assignments.”

Early last year he was promoted to vice chairman at CBRE, making him the firm’s second-ever retail broker to receive that title (Andrew Goldberg was the first). In 2014 and 2015, he was ranked CBRE’s No. 1 retail broker in the Americas.

The 55-year-old broker has a long work history, starting with four jobs while attending Duquesne University in Pittsburgh, including for the theatrical stage employees union doing lighting for performers, including Billy Joel, Fleetwood Mac and the Eagles. His first job out of college was at Equibank, working in the retail bank marketing department. He then opened two upscale retail flower “markets” and “design studios” in Pittsburgh before transitioning into the real estate business, working for the Pittsburgh-based First City Company, which manages, leases and develops shopping centers throughout the mid-Atlantic states.

Mr. Hodos worked at a series of real estate companies in New York City (including Edward S. Gordon Company and Lansco) starting in 1990 and founded his own specialty retail brokerage HGCD Retail Services in 1999. He ended up selling the whole business to San Francisco-based retail leasing agency Madison Marquette before starting at CBRE more than eight years ago.

On a personal level, Mr. Hodos and his partner of 19 years, Michael Jones, a residential real estate broker at The Corcoran Group, have a Cairn terrier, Chester (the couple had to put its second Cairn terrier, Casey, to sleep last Christmas). They live in a condominium unit on East 51st Street and Second Avenue but are in the process of purchasing a home in a new condo development on West 19th Street. They also have a second home in East Hampton.

Commercial Observer: How did you go from being a big broker to a really big broker?

Mr. Hodos: Unfortunately or fortunately, it was sort of the tortoise and the hare kind of thing. It was just plugging away with existing tenants that we’ve had long-term relationships with.

I came here in November of 2007. Quite frankly, in September of 2008, I had a dozen leases either out, ready to go out or ready to be executed, and we all know what happened in September of 2008. Only one of those leases got signed, 11 of them cratered. So I was brought in here partially to be the golden boy, the rainmaker, whatever, and I was doing that in the first nine months of 2008. And then all hell broke loose, and everything fell apart. And what I had to do between September of 2008 and 2010 and 2011 when I started doing the big deals again was rebuild my business from the ground up, as many people have to do. It was a very challenging time.

Why do you only take on high-profile agency assignments?

One of my strengths actually is in merchandising. I’m really a frustrated merchant. If it wasn’t 2016, I’d probably like to own my own department store or specialty store—so I have a sensitivity to merchandising and retail tenant mix, which ultimately elevates the project. That doesn’t mean it has to be luxury or all high end; it has to be an assortment of tenants. There’s an art to retail real estate as well as a science.

You and Mr. Goldberg are two of the three New York City retail brokers with the vice chairman title at CBRE (David LaPierre is the third). You guys ever work together?

I work with him on select projects. Right now, there’s the [roughly 50,000-square-foot] retail portion of 432 Park Avenue [on East 57th Street], which is Harry Macklowe’s. There is additional space on [East] 56th [Street] and Park [Avenue,] which we are not yet marketing. Plus the ground and second floors can also be combined with additional office space above to yield over 90,000 square feet. Paul Amrich [of CBRE] handles the third floor up on 57th Street, which is the office portion. We’re calling the retail part of the project 40 East 57th Street – The Shops at 432, the idea being that “432” is such a prominent addition to the skyline, that people “in the know” know it simply as “432” or “432 Park Avenue.”

What is the asking retail rent for the space?

There is no asking rent yet.

What is the ballpark?

On 57th Street, probably $1,500 a foot on grade, $150 a foot in the lower level, which has really high ceilings and is basically column-free space, $300 a foot on the second floor, but you know, the landlord will do the work to get them there.

We’re targeting luxury, and we’d like that portion of 57th Street to be a continuation of the portion between Fifth and Madison [Avenues]. So we’d like to sort of pull luxury over to Park Avenue.

What other assignments are you on now?

We’re doing the disposition of the Joe Fresh stores in Manhattan, which is basically at this point three stores: 510 Fifth Avenue, 110 Fifth Avenue and there’s a store on 34th between Seventh and Eighth [Avenues].

How many people are on your team?

There are three people, including me. They’re wonderful guys. I’d love to add a woman to the team by the way, but right now, they’re two guys. They’re totally different personalities. They’re brilliant, and much of my success I have to credit to them.

How are they different?

Joe Hudson is sort of Midwestern, conservative, laid-back. He is actually related to Webber Hudson. I don’t know if you know Webber at Related, he’s doing the retail of Hudson Yards. They come from the Hudson department store family, as in Dayton Hudson, which became Target. So Joe has the soul and credibility of someone from like the 1950s or 1960s. If Joe were born 50 years ago, maybe 60 years ago, he would be probably working for the Hudson department store chain, which was based in Detroit. He’s only 28 years old, but he has the soul of somebody much older. And Dan [Alesandro] is a quintessential New Yorker. He went to [New York University]. He has the energy of an Energizer Bunny. He is sharp as a tack, and he keeps me on my feet basically.

Where do you shop for clothes?

Barneys and Bergdorf Goodman for the most part.

Do you shop at your tenants’ stores?

I do shop at Coach. They have a men’s line. That’s about a year old [points at his overcoat], but that’s Coach. So I do buy things at Coach.

How about Ralph Lauren?

I do shop at Ralph Lauren. I just bought three shirts there. They’re my client, and I’ve done work for them, so I like to support them.

Do you wear a client’s brand to meetings with the company?

Sometimes. What I try to do is not offend them. I would never bring a Michael Kors briefcase to a Coach meeting because that would kind of throw them over the edge and vice versa. But you know, what is this [he looks at the back of his tie]? An Hermès tie? I don’t think that really offends anybody unless I guess you’re Louis Vuitton. I used to do that a lot more. I remember, when we were trying to get Banana Republic to come to Pittsburgh, we all dressed up.  This is when Banana Republic used to have the Jeep in the front of the store, and they had sand and a palm tree. We all dressed up in safari clothing with safari hats.

You have a big personality. How has that helped and hurt you in business?
I think it helped me pierce through some barriers that a meek personality would not allow. You know I’m not afraid to knock on Steve Roth’s door at Vornado for example, or Steve Ross’ door at Related [Companies]. I don’t really think it’s hurt me because one thing I tend to do is shut my mouth and I know when to listen. Listening is probably more important than talking in this business. It’s actually something that I’ve had to learn and work at.

What are the current retail trends you’re seeing?

Well, I think that there’s a trend toward—and this goes to really national trends with millennials—wanting to experience things rather than own things. Other than iPhones or technical gadgets it sort of goes to adding more restaurants, more food and beverage. Apparel, shoe and accessory categories have been challenged, certainly in the past year, and part of it is because of the lack of newness in fashion, or demand for any one key item. This is whether it’s at the luxury end, or at the Walmart end of things. Key items typically drive things like holiday sales, and they drive consumers into the stores, and they buy apparel, shoes and accessories, which is where the stores make most of their margins. Well that kind of thing has been turned on its side because millennials in particular want to go skiing, they want to go snowboarding, or they want to go out to dinner or go to the theater more. They don’t want to buy cars because they’ve got Uber, they’ve got Zipcar.

What should a retailer do?

I think it’s [be] dynamic, it’s adjust, it’s come up with what retailers have to do, and it’s hard to speak of this generically because it depends on the retailer. But I think for the most part retailers can operate with fewer stores, but each store has to be a very specialized experience. So if you’re Burberry now, you can walk into a Burberry store in London—I assume this technology will come here at some point—you could stand in front of a mirror at Burberry, you could put on a Burberry outfit from head to toe, and the salesperson could take their iPad or whatever it is and literally show you that outfit in different colors. It’s kind of a magic mirror.

I wrote a story recently that it’s a tenant’s market. Do you agree?