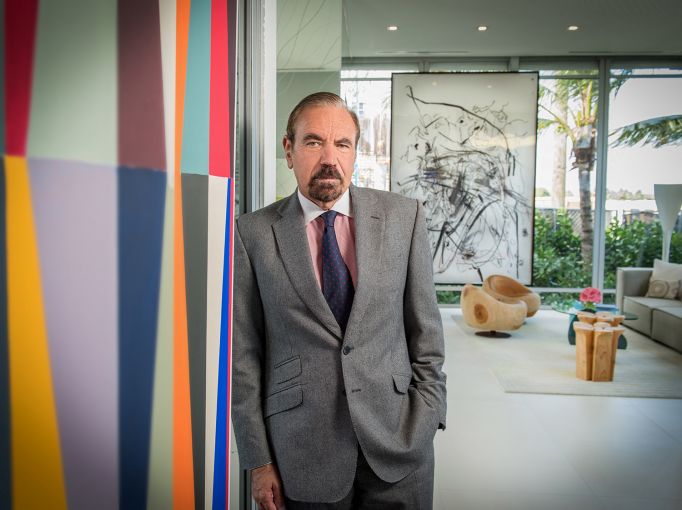 Jorge Pérez, the chairman and chief executive officer of Related Group in Miami, has been called a lot of things. His favorite?

“Donald Trump of the Tropics,” because “it is the funniest,” Mr. Pérez told Commercial Observer by phone from his office in Downtown Miami, adding, “now that my friend is the frontrunner of the Republican Party.”

He’s also pals with former Republican candidate Jeb Bush and Bill and Hillary Clinton. (Mr. Pérez, a long-time Democrat, plans to vote for Ms. Clinton, because “her ideals and ideas most closely match mine.” But a friend is a friend.)

Mr. Pérez, 66, certainly runs in those kinds of circles. He has an estimated net worth of $3.5 billion, according to Forbes’ 2015 list of the 400 richest people in America. As the most prominent Miami developer, he has been credited with forging the city’s skyline.

Related has built, rehabilitated and managed more than 90,000 condominium and apartment residences—totaling about 100 million square feet—since the company’s inception in 1979, from affordable housing to the most luxurious millionaire pads.

Current projects in Miami include SLS Brickell, a 450-unit residential condo with 133 hotel rooms in Brickell, which will be completed by the fall, and the 50-unit condo One Ocean at the tip of South Beach, on which Related is putting the finishing touches.

Commercial Observer: People are talking about the market taking a turn for the worse this year. What are you seeing in Miami?

Mr. Pérez: Well the market has definitely slowed down a bit, but in Miami we’re still seeing very strong sales—not as strong as 2015 but fairly strong. Our product has stayed fairly solid. We don’t see people swarming in droves to get into [the projects]. All our jobs are doing two to three units per week in sales, [meaning] the ones [that are selling]. This time last year we were probably seeing triple that.

You were hit by the last downturn. How did you recover?

Those were tough years. We were very fortunate that Miami has a very strong international market. And I think what saved us from the previous recession was Latin Americans coming to Miami in droves to buy condominiums.

What’s hot and what’s not in Miami real estate right now from a developer’s perspective?

We have some neighborhoods that are lower density that are very hot. Like Wynwood is one of the hot places in Miami. The Brickell area, which is our financial district and where the new malls are coming in, continues to be hot. Anything on the water we’re continuing to have very good results.

Secondary locations are suffering the most. The fringe areas. You know what happens in an upturn is everybody goes and gets the best sites, and then they get secondary sites. When there’s a downturn, the secondary sites, those that are not ideally located in the more prestigious areas, are the ones that take the biggest hit.

Do you have the largest Hispanic-owned business in the United States?

How many people work for you?

Mmhmm. We’d have much more if you consider international.

How’d you start Related Group at age 29 with Stephen Ross, the chairman and founder of Related Companies, as a minority partner?

We became friends. First we competed against each other in a couple of things and then decided to join forces, and in 1979 we became partners and did all affordable housing. We started as an affordable housing company.

Why did you keep the Related name?

Because I never thought of changing it. His company was only in New York, so when we did Related here, the New York and the Florida company didn’t much have to do with each other. From the beginning, all the decisions were made down here. And I liked the name Related.

What’s his involvement with the company?

You are Miami’s best-known and largest real estate developer. How much do you think you are responsible for shaping Miami’s skyline?

Definitely for a large chunk of it. There was an article that came out that said that one out of every four high-rise dwellers is living in a Related building. I don’t know if that’s a true statistic or not, but we are definitely the company that has built the most and the most prominent high-rises.

How did you go from being a Miami city planner for low-income housing to building some of the most expensive apartments in the city?

I just really wanted to expand my mind, be more creative. Low-income housing doesn’t allow you to have much creativity and design. By nature, the units are small, and they have to be very inexpensive because they’re serving, you know, that particular market. We try to make them as beautiful as we can with landscaping and so forth, but I wanted to work with more creative architects. I wanted to produce more iconic buildings.

Your office is in Downtown Miami.

Correct, part of a mixed-use project, One Miami, [which has] residential, office and retail. [My office is] surrounded with art that changes all the time—so, I live with art. It’s a seamless process, you know, business and art. When I finish talking to you, I’m getting an art collector’s award at the Thyssen museum in [Madrid,] Spain, so I’m going to Spain again for an art fair and for this big art event where I’m being honored. I just came from Mexico—[where we have] a couple of real estate projects going on—but I was also a guest at the Zona Maco, which is the Mexico art fair. So I am very fortunate today to have an amazing senior staff that is capable of really running with the business, and that allows me a lot of time to do two things that I very much enjoy, which is art and philanthropy.

I read that you donated $20 million worth of your Latin American art collection and $20 million in cash to the Perez Art Museum Miami, formerly known as the Miami Art Museum.

We’ve given them a lot more since then in art pieces and money. It’s an ongoing project to build a great museum.

What inspired you to do that?

I thought it was very important for Miami to have a great museum. They needed the art and the money to be what it is today. They came to me and asked me if I would do it, and I said yes. I always wanted my collection to go in a museum. So I collect sort of like I’m in a holding pattern to give it to a public institution; I’m a storage facility that gets to look at my art. You have to remember no public museum of any size has ever been named after a Hispanic, and I thought it was very important to have a Hispanic name for a major institution just like the Rockefellers have, the Whitneys have, the Guggenheims have.

How extensive is your art collection today?

We gave a lot of it to the museum. We probably have in the personal collection over 1,000 pieces.

What’s the value of your collection?

How did you become such an art aficionado?

Since the early days I would go to museums with my mother. I have a passion for things that are seen through the eyes. I love movies for example [he has produced four movies including “Ira & Abby” and “Paraiso Travel”]. I love theater. I love looking at and reading art books. I love going to museums, collecting beautiful things. I love going to fairs. It really is a passion, and I combine it with my business. All my projects are filled with art.

You lived in Argentina until age 9, then Cuba for one year and then Colombia before coming to the United States in 1968. How would you characterize life in each place?

The one I remember the most, of course, is the Colombia time. I mean, those were my formative years. I remember very fondly great friends in Colombia, which I still have. Fantastic country. Did not have any of the problems [they did later]—they were starting—but did not have the guerillas and the violence, so it was a very carefree, open, wonderful place to grow up in.

In Argentina, I was little. I’m not good at recollecting early years. I just have certain glimpses that come to my mind about, you know, walking in my parent’s house, but I do not have any recollections of friends there. Nevertheless there is a great love for Argentina because my parents were definitely Argentina lovers. So as I was growing up, even in Colombia, [they were] talking about Argentina and what it was and the beautiful city of Buenos Aires.

My parents were Cuban. I only lived there one year. Until [Fidel] Castro came, I would go every Christmas to one of my grandparents’ house and every New Year to my other grandparents’ house. So that two- to three-week period during Christmas and New Years I spent in Cuba. There were great, great memories of youth going there, but they would also call me “El Argentinito,” the Little Argentinian. I was always in a foreign land. Even in Colombia they used to call me the Argentinian or the Cuban, you know, so I was always sort of like in exile. I was always the odd man out.

Are you still the odd man out?

Yeah. As opposed to my wife [nurse practitioner Darlene Pérez] who’s a very social person, I’m not great in crowds. I work hard at it, but I’m fairly shy, and I’m much more at ease in my own space with my books and my movies, my art.

How often do you travel to New York City?

Where do you stay?

I either stay with Steve Ross [in Related’s Time Warner Center]. I have my Pérez guest room there, or I stay in several hotels. I like the Standard. And the hotel I’ve been staying the most at is called the NoMad Hotel. Before I would stay at The Pierre and at The Mark. Then Related built the Mandarin [Oriental, New York], and I stayed at the Mandarin for a while, but now I really like being Downtown. The galleries are down there. The cool restaurants are there. They’re more boutique-y hotels. I like the design very much. I have a son [Nicholas, 27] who works in New York, and he lives Downtown. He works for Related of New York. He’s a developer.

I have a philosophy that, for my sons to work for the company, they have to work for five years in a progressively more responsible job and either finish a master’s degree or work for another couple of years. And my oldest son [Jon Paul, 31] has already done that, and he’s working for me and doing very well here [in Miami] and my oldest, my daughter [Christina, 32] is a social worker. She got her master’s in social work, and she works with at-risk children, which is a great career. [Mr. Pérez also has a 12-year-old son Felipe with Ms. Pérez, his wife of 14 years.]

Your home’s in Coconut Grove right?

Mmhmm. In Hughes Cove. I built this housing development of very expensive homes on [Biscayne Bay], and I live in one of those homes.

And then you have homes in Hollywood, Fla., Utah and Tuscany. Is that correct?

We used to have one in Punta del Este, in Uruguay, but just sold it.

And you don’t want an apartment in New York?

Nope—well, you know, [at Mr.] Ross’ Hudson Yards—maybe I’ll get one there. I used to have one in New York at Time Warner [Center] and sold it, and maybe he’ll convince me to get one at Hudson Yards. But I figured if I’m gonna be in Hudson Yards, you know, my guest room is cheaper. [Mr. Ross will be moving to Hudson Yards.]

What would you say is your motto for your life? Do you have one?

Yeah. Do everything with great passion.