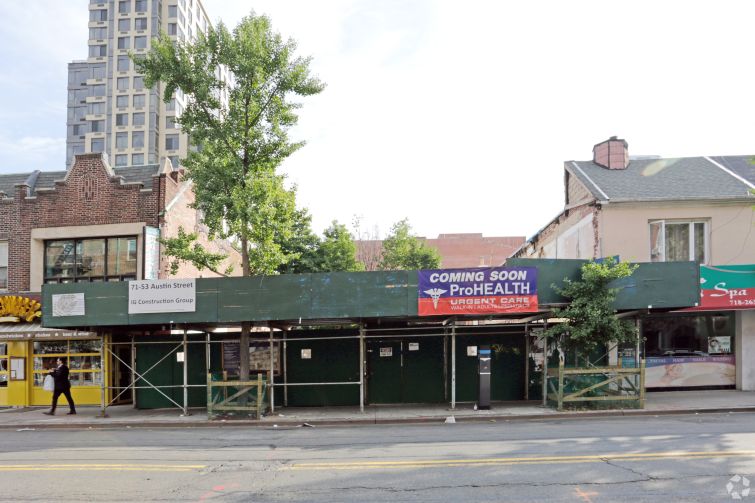 A long-plagued development site in Forest Hills, Queens has sold to a new owner with plans to put a medical office complex at the yet-to-be-built structure, according to property records and the broker in the deal.

An investor paid $8.7 million for 71-53 Austin Street between 71st Road and 72 Avenue, which has 20,000 square feet of development rights, according to Ceasar Salama of Luxury Property Group. The site, which was once rumored to hold an H&M in 12,000 square feet, is slated to be an emergency care ProHealth office.

Mr. Salama represented the sellers, The Jackson Group and A&H Acquisitions as well as the buyer, listed in property records as Austin Prop, a Little Neck-based LLC.

The 1,630-square-foot property along the Queens shopping strip last traded hands in January 2013 for $4.6 million, according to property records, nearly half its sales price three years later. In October 2013, DNAinfo reported that H&M was in talks to take the two-level, planned building. But those negotiations broke down, the website reported, and ProHealth inked a deal for 75 percent of the 12,000-square-foot building in December 2013.

But the project was hit with a stop-work order from the New York City Department of Buildings in September 2014, according to records filed from the agency, because demolition work was contrary to the plans for the building. The issue is listed as resolved.

“It was one of those deals that just made sense and was able to go through pretty quickly,” Mr. Salama emailed. “The sellers were able to take advantage of the significant value they’ve added to the property since signing a lease with ProHealth to occupy part of the ground and the second floor of the planned building, while the buyers were attracted to the property’s location on Austin Street’s well-established shopping district, and will have the ability to bring more value by maximizing the building’s footprint to include residential space on top of the commercial building that was previously planned.”