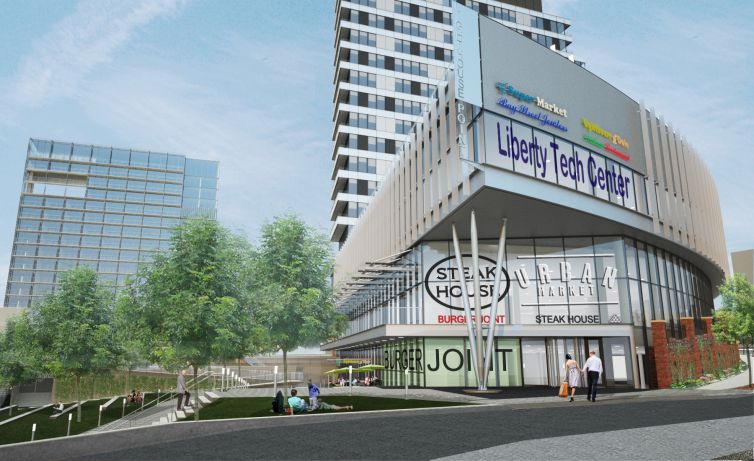 A rendering of the office and retail component of Lighthouse Point (Photo courtesy: Triangle Equities). tcullen2015

Workspace provider Regus has inked a deal for about 30,000 square feet at a mixed-use development project on Staten Island’s North Shore.

The company will anchor the 65,000-square-foot first phase of Lighthouse Point, which Triangle Equities is building in the St. George section of the borough, according to a press release from the developer. This deal leaves about 35,000 square feet remaining for office and retail space at the project, which is near the Staten Island Ferry terminal.

Construction started in 2015 and is slated to finish next year, according to The Wall Street Journal, which first reported news of the deal. Phase I of the $200 million Lighthouse Point also includes a 12-story building with 116 rental apartments.

“We now look forward to delivering this multi-faceted development to the local community, New Yorkers from all over the city, and visitors alike,” Triangle Equities President Lester Petracca said in prepared remarks. “We are confident that Lighthouse Point will be transformative and serve as a true destination that will greatly impact this waterfront area of Staten Island and the greater New York region.”

Regus’ lease is for 15 years, the release indicates. Asking rent in the deal was not immediately available.

News of the anchor tenant also comes with Triangle Equities securing financing from both public and private equities, as The Journal reported. Goldman Sachs originated $30 million in construction financing and tax credit equity, while Citizens Bank provided a $29 million construction loan. The developer also secured $16.5 million in financing from the state’s Empire State Development, along with $6.2 million from the City of New York.