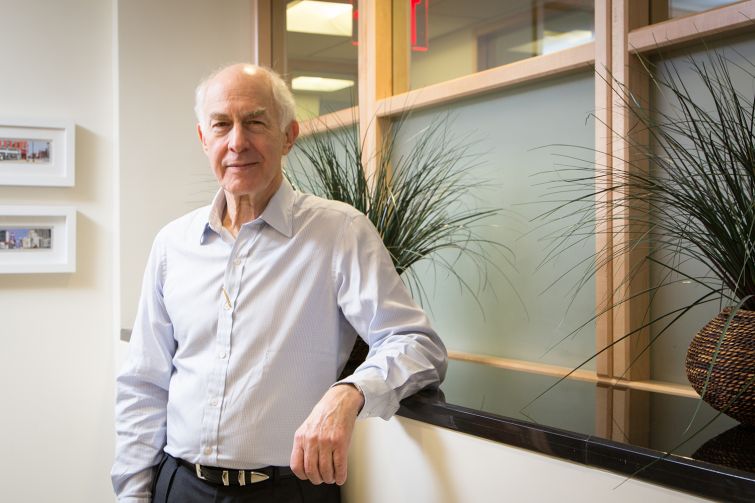 You could call Jeffrey Sussman a “Washington insider.”

Not because he has any special knowledge of whether Ted Cruz is the next GOP candidate to flame out or whether Bernie Sanders can do anything to lure those superdelegates away from Hillary Clinton. But he can offer you a peek inside 860 Washington Street, his newest development in the Meatpacking District.

And if that doesn’t earn him the Washington insider title, what about Capital Crossing, Mr. Sussman’s commercial colossus in Downtown D.C.?

Moreover, he can tell you about the myriad of different agencies to deal with when building in the nation’s capital and the bureaucracy of building in New York—and why London, instead, is a relatively stress-free environment to build in.

“London is a world of difference in a positive sense,” he said. “I think there is a basic intellectual honesty in that [city’s building] process.”

Mr. Sussman was the longtime head of the Louis Dreyfus Property Group until its parent company Louis Dreyfus Group, a global commodity giant, changed ownership in 2011 and didn’t want to focus on real estate in the United States anymore. Now the founder of Property Group Partners, with the backing of William Louis-Dreyfus (who started the real estate wing in the late 1960s), Mr. Sussman is making a splash in New York City, Washington, D.C., and London all at once.

While he has mostly focused on development in the nation’s capital and in Europe since starting out as a developer in the late-1960s, Mr. Sussman is also codeveloping 860 Washington Street between West 13th and West 14th Streets in the Meatpacking District with Romanoff Equities, one of a handful of properties he has developed in the Big Apple. The 120,000-square-foot commercial building will abut the High Line and sit not far from the Standard High Line in the burgeoning neighborhood. Doing this project is something of a legacy item for the native of Broadway and West 104th Street, having missed earlier opportunities in other trendsetting neighborhoods.

“I’m really thrilled we’re there,” said Mr. Sussman, 72, from behind the enormous marble table (which serves as his desk) at PGP’s offices at 609 Fifth Avenue between West 48th and West 49th Streets. “I missed the opportunities in Soho. We weren’t focused on New York then.”

Tenant build-outs of office space will begin this March, and the building will get a temporary certificate of occupancy in April, he said.

“We’re a bit late,” Mr. Sussman said last year. “The construction industry has been difficult the last two years in New York because everybody’s been so busy. But we’re thrilled with the product.”

Delos, a real estate design and construction firm, signed a lease in October 2015 for 22,000 square feet. The company’s new offices will be on the fourth and fifth floors of the 10-story building. “I think that’s good for us to have them in our building,” Mr. Sussman said. “And I hope it’s good for them. I think it is; otherwise they wouldn’t have signed the lease.”

That leaves about 80,000 square feet of office space up for grabs, which Mr. Sussman said will likely be filled by boutique firms. Floor plates at the building are comparatively small for Manhattan, ranging from 8,000 to 10,000 square feet. Negotiations with single-floor and multifloor tenants are ongoing, he noted. Asking rents in the building range from $150 to $200 per square foot, as Commercial Observer previously reported.

Cynthia Foster, the head of the national office division for Colliers International, said the building was transformative for the Meatpacking District. The fact that tenants are paying at least $150 per square foot for 860 Washington Street’s smaller floors boosted the property value that’s being created in the neighborhood.

“It’s probably the Seagram’s Building of the Meatpacking [District],” said Ms. Foster, who has known Mr. Sussman since 1999 while she was at Cushman Realty (now Cushman & Wakefield). “It’s probably the standard of excellence in that market.”

The Meatpacking District has long been one of the most posh areas in town, and Washington Street is undoubtedly one of its most coveted strips. Last year, Taconic Investment Partners and Thor Equities sold 837 Washington Street to TIAA-CREF for $190 million, property records show. Taconic and a partner bought the site in 2008 for just $45 million with Thor buying the partner out three years later for $45 million. The 63,0000-square-foot structure is entirely occupied by Samsung, which uses the building for both office and retail space.

Since The Whitney Museum of American Art relocated to the Meatpacking District last year, the neighborhood has transitioned from a nights and weekend destination to one frequented 24/7, said Anita Grossberg, a commercial real estate broker with Douglas Elliman. Ms. Grossberg arranged a temporary lease for the musical Natasha, Pierre & The Great Comet of 1812 on the site of what is now 860 Washington Street. Once that building is completed and leased out, the West Side enclave will be more of a cultural and business destination for New Yorkers and tourists.

“I mean, our vacant lot was great, but they built a beautiful building,” Ms. Grossberg said. “There’s a vibrancy and energy around Meatpacking that’s just different [most other areas in New York City].”

For a developer, Mr. Sussman is rather relaxed and sedate—opting not to wear a tie and reclining his chair rather far back when he talks until he’s practically lying down. Because he’s developed in so many different cities, Mr. Sussman has seen how various municipalities conduct business. He can talk at length not just about zoning issues, but about the city’s need for more infrastructure investment and affordable housing—even weighing what was and was not working. A New York native, Mr. Sussman is quick to note that the city once had three baseball teams and added it was a shame that neither of the city’s football teams played in the five boroughs anymore.

The Washington Street project isn’t Mr. Sussman’s first soirée working on something game-changing—or on something in New York. Originally a broker who worked on assembling the parcels for the late Seymour Durst’s 1133 Avenue of the Americas, Mr. Sussman went to work for the Louis Dreyfus venture in 1968. Four years later he was in Washington, D.C., looking at new opportunities. By 1979, he led the development on one of the first Four Seasons hotels in the United States at 2800 Pennsylvania Avenue. During that time, Louis Dreyfus Property Group also built 527 Madison Avenue and 148 Lafayette Street.

Louis Dreyfus in the early 2000s developed the 1.6-million-square-foot Station Place in the nation’s capital with Fisher Brothers, also a New York-based company that wanted to venture into the District of Columbia. The property is located essentially next to Union Station, the city’s main transit hub, and is now occupied by the U.S. Securities and Exchange Commission.

“Jeff is a great partner,” said Ken Fisher, a principal of Fisher Brothers, who said he’s known Mr. Sussman since the 1980s. “He knows his markets. He assembles a great, great team. I can’t say enough.”

Mr. Sussman said the demand for new office space with a modern design in D.C. is high. Law firms and other tenants are looking for fresh spaces in which they can create density, he added, and are pining for glass curtain wall—something he started using in D.C. decades ago.

The developer predicted design standards and practices a decade before they were common practice, said Ms. Foster, who sold 2001 K Street in the Downtown section of Washington for him 15 years ago and broke the city’s $400-per-square foot record. Mr. Sussman stands out as a developer because he’s not just willing to take risks, Ms. Foster said, but can also anticipate tenant desires such as that density and floor-to-ceiling glass.

He’s not done in D.C. yet, however. PGP is currently developing the 2.2-million-square-foot Capital Crossing in the city’s downtown area. Adjacent to Georgetown University’s law school, the mixed-use project features five floor-to-ceiling-glass buildings. What makes this project more interesting beyond its enormity? It’s over a sunken highway in the city, which Mr. Sussman compared to the construction of Rockefeller University over the FDR Drive on Manhattan’s Upper East Side.

On top of that, PGP is also developing 52 Lime Street in London—dubbed “The Scalpel” for its shape—the latest of several developments he’s done in the city. Developing in London is different than in most American cities, Mr. Sussman said, because there are planning districts and city planners.

“Now you pay more for consultants,” he said. “You have more consultants than you can shake a stick at in London, but it’s part of the turf. I think [that process] has more transparency than others. It’s fabulous. And the planning that goes into that stuff over there is really terrific.”

And while London has a streamlined way of facilitating development, the Morningside Heights native believes that his hometown has once again re-emerged as a global city. (He remains loyal to the San Francisco Giants baseball team because he was loyal to them as the New York Giants when they played in the Polo Grounds.)

“I think it’s fabulous what’s happened in the city,” Mr. Sussman said. “I think under good financial times and careful mayors, New York again became the premier city I think in the globe.”