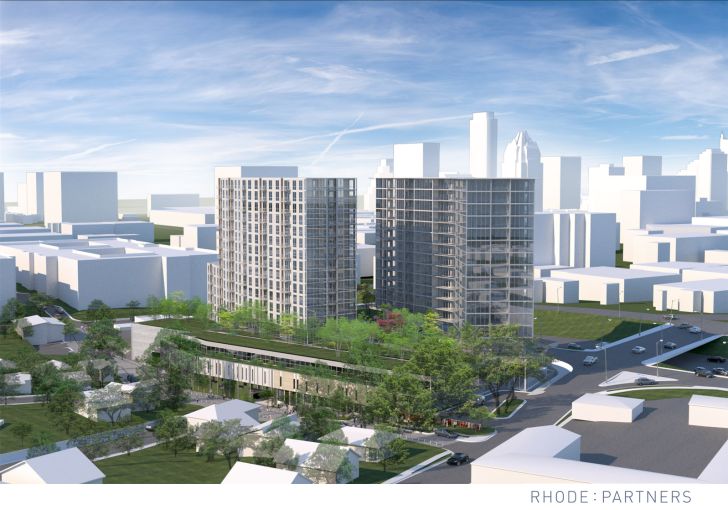 A rendering of One Two East in Austin.

Everything really is bigger in Texas—at least for Colliers International’s structured finance team.

Mr. Donnelly told CO that of the total $217 million financing package, he and Ms. Ahrens are looking to place roughly $180 million in debt and anywhere from $35 to $40 million in preferred equity or mezzanine debt on behalf of the Austin-based development company.

Legend Communities—which is led by Haythem Dawlett and John Scardino—will begin construction on One Two East, which will comprise two 15-story towers by mid-2016. One tower will be devoted to senior living and the other building will hold purely market-rate rental units, Bill Hayes, chief operating officer at the firm, told CO.

“Projected rents for both the multifamily component and for the active senior living component are well within the range of comparable properties in Austin,” Mr. Donnelly said in prepared remarks.

He said that the project is “conservatively underwritten” based on expected rents and costs are coming in well within project estimates.

The 2.8-acre site, which currently houses a bingo center and a CVS/pharmacy, is located at the intersection of Interstate 35 and 12th Street in the Downtown and East Austin submarkets. Given its proximity to University of Texas and University Medical Center Brackenridge, Mr. Hayes said he expects that many students, doctors and alumni will be drawn to the development.

The project’s “design is well conceived and will position this asset head and shoulders above the mostly garden-style rental product available in this submarket,” Ms. Ahrens noted. “The project will stand out, and will be an exciting and edgy addition to the East Austin streetscape.”

The 195 senior apartments and the remaining 279 market-rate units will each have separate amenity packages, Mr. Hayes stated. The senior living building will feature a roof garden and a full-time activities director, while the other building will have workout facilities. Each building will have a pool and parking.

Additionally, roughly 65,000 square feet of ground-floor space in one of the towers will hold a grocery story and pharmacy. Both the senior housing component and the grocery store are much-needed additions to the community, he said, noting that the nearest supermarket is several miles away. A tenant has yet to be determined.

“While we expect to have agency construction loan options for this project, we are certain that the offering will also be enthusiastically embraced by bank balance sheet lenders and insurance company lenders,” Mr. Donnelly added. “I think the debt falls into place fairly quickly—although due to the size of the construction loan, it may entail a syndication of bank lenders.

He said they are equally confident that the project is attractive to large institutional investors eager to deploy capital in Austin.

Mr. Donnelly expects the financing to be completed by the second quarter of 2016.