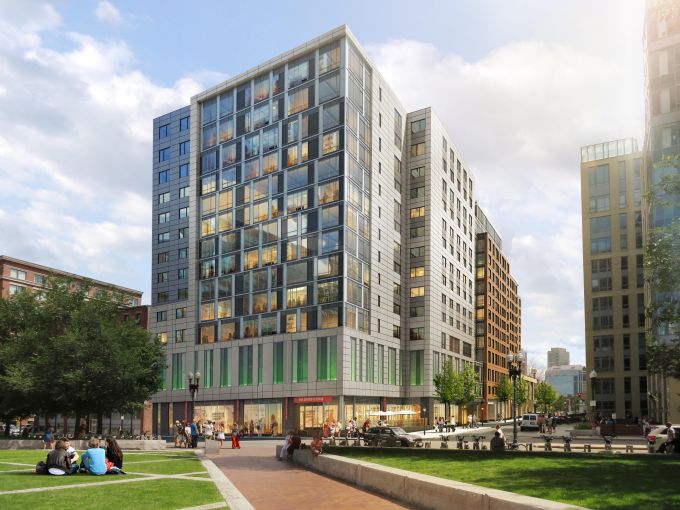 A rendering of Parcel 1B (Image: Boston Redevelopment Authority/Related Beal).

Construction on the one-building mixed-use project began this week and the project is due for completion in 2018.

Citigroup also provided a $3.6 million subordinate loan to serve as both construction and permanent financing. That loan does not amortize and carries a reduced interest rate.

“We love the hotel financing business, but what really got my group’s interest is the affordable nature of the project,” Duane Mutti, senior vice president of the community lending and investment team at Wells Fargo, told Commercial Observer. “It is bringing much needed affordable to low-, moderate- and middle-income people in Boston, and that’s a large unmet need. Related came up with a very complex financing structure that is delivering much-needed workforce housing.”

Related Beal’s development, dubbed Parcel 1B, sits on a state-owned site, so the developers entered a 99-year land lease with the state of Massachusetts Department of Transportation. The project also received a 121a tax abatement because of its affordable component, meaning that a portion of the taxes on the property will be subsidized for the first 15 years.

“I congratulate the team at Related Beal for reaching this early milestone in redeveloping Parcel 1B,” Boston Mayor Martin Walsh said in a press release announcing that the project’s financing had closed. “They were able to work creatively to secure the financing needed to bring this unique project to fruition, and I look forward to the ground breaking.”

Mr. Walsh is focused on bringing more housing options to the city, through his “Changing City: Boston 2030” plan, which calls for 53,000 new residential units, including 44,000 new workforce housing units, to be built by 2030.

The Parcel 1B development, which is located on Beverly and Causeway Streets in the Bulfinch Triangle, a historic district of Boston, was originally meant to hold 239 affordable- and market-rate units, but the developers changed their plan in April 2015, choosing to make all of the rental apartments below market rate.

Representatives for Related Beal and Citigroup did not respond to inquiries by time of publication.