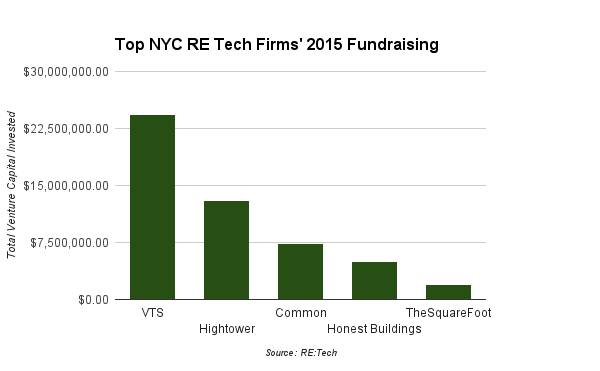 Venture capital investments into real estate related technology companies nationwide were down more than 20 percent for the fourth quarter of 2015 compared with the same time a year earlier, as the market hints at a possible strain on emerging companies.

Real estate tech as an industry raked in an overall $1.42 billion in venture capital last year throughout the country, a new report by RE:Tech shows. New York City made up about nearly 13 percent of that total, amounting to about $190 million in 27 deals, according to a breakdown provided by the company to Commercial Observer. That’s a 21 percent jump in funding from a year earlier for New York City, according to the industry advisory, which has ranked just above Silicon Valley in terms of venture capital performance for the last five years.

Although New York and the rest of the industry had a strong 2015, there are concerns that emerging real estate companies won’t fare as well as some of the more established firms. Rising interest rates and an ebbing real estate market could lead to a correction in the niche industry as investors start to pull out.

New York City-based startups as a whole brought in $5.95 billion in venture capital last year, according to a PricewaterhouseCoopers and the National Venture Capital Association’s MoneyTree report released today and first reported in The Wall Street Journal. With 395 investment deals, that was a 62 percent increase from the $3.67 billion raised in 2014. City officials touted the news as proof that the Big Apple has become a destination for startups.

“Investments in real estate technology have been bullish for the past several years,” Ashkan Zandieh, the founder of RE:Tech, said in an email. “While there might be a lot of excitement about the industry from a consumer perspective, investors may be re-evaluating the sector and overall investments.”

VTS, formerly known as View the Space, did the best of any New York City-based company in 2015, during which the asset management and leasing platform raised $24.3 million. Most of that came from a Series B fundraising round that closed in July 2015, according to fundraising tracker Crunchbase. VTS took in $21 million—led by OpenView Venture Partners. Six months earlier, the company raised about $3.3 million.

“Investors see VTS as the company driving the shift to real-time data,” Ryan Masiello, a co-founder and the chief revenue officer, told CO. “Arguably, we’re solving one of the biggest pain points out there. That’s definitely a thing that attracted investors.”

Second in the RE:Tech rankings was VTS competitor Hightower with $13 million venture capital, which the company received during a May fundraising round. That doesn’t include the strategic investments by Newmark Grubb Knight Frank, William Rudin of Rudin Management Company and Barry Sternlicht of Starwood Capital Group, which the leasing and market data platform developer announced in August. Hightower officials have declined to indicate how much the three parties’ investment amounted to.

“We hit our goals and exceeded them,” Co-founder Brandon Weber told CO today. “We’ve got some of the largest commercial landlords and brokerage firms signed up to use Hightower.”

The remaining top five companies fared comparably weaker in 2015, according to the RE:Tech numbers. Behind VTS and Hightower were: coliving startup Common, which raised $7.4 million last year; property management platform Honest Buildings, which brought in $5 million; and app-driven office brokerage TheSquareFoot, which raked in $2 million.

The software, platform and app industry as a whole has benefitted from low interest rates since the Great Recession, Mr. Zandieh said. But rising interest rates influencing both the real estate industry and venture capital could alter the cash flow into these highly specialized tech companies. As a result, the pressure will increase for newer companies to perform and grow, he added. There were only eight Big Apple real estate tech companies started in 2015, more than half of the 19 formed a year earlier.

“While the Federal Reserve’s quarter-point rate increase will have very little immediate impact on more established and better-funded tech companies, it may impact early stage companies,” Mr. Zandieh said. Overall in the industry, “there has been a lot of excitement the last few years and a lot of funding going into the sector. Now investors may be anticipating exits and a return on their investment.”

There are currently 100 companies trying to serve the commercial real estate industry, which had been running on 30-year-old software, according to Mr. Weber. As the market shifts, investors will start strictly buying into more established real estate startups that have a profitable track record. As a result, he said, those higher quality firms will start buying up smaller tech companies.

“We’re going to see some major mergers as these firms that are fighting a lot” for a market share, he said. “I think there’s going to be a flight to quality for real estate tech.”