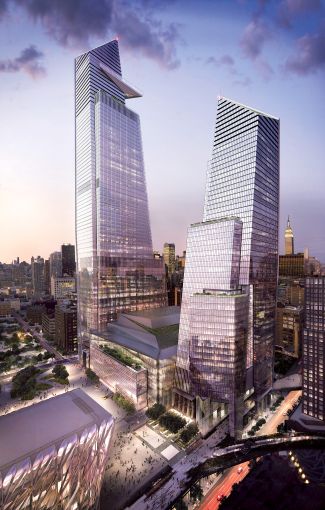 The San Francisco-based banking giant will take roughly half a million square feet divided between two sections of the 80-story tower, one person with knowledge of the deal told Commercial Observer. The purchase price and exact floors were not immediately disclosed.

With the massive sale of office condos to Time Warner in January 2014 and the recently announced deal with private equity giant KKR, the Wells Fargo deal practically seals occupancy at 30 Hudson Yards. More than 2.3 million square feet have been sold off in the tower, which is under construction.

Most of the building has been sold off, but the 60th through 66th floors of 30 Hudson Yards are currently listed as “under negotiation” on Related’s website.

Wells Fargo currently occupies 372,236 square feet at 150 East 42nd Street between Third and Lexington Avenues, with a lease expiration date of June 1, 2019, according to CoStar. However, loan documents on the office property from 2014 state that the bank’s lease expires in 2028, with the exception of one floor that has a lease expiration date of June 30, 2019. Whether or not any terms of Wells Fargo’s existing lease have been changed since remains unclear.

“Our real estate group is always evaluating our real estate portfolio and our space requirements for our businesses,” a spokeswoman for the bank told CO. “It’s what we normally do when leases are up. This market inquiry is consistent with our normal practices.” She declined to comment further.

Located on the southwest corner of West 33rd Street and 10th Avenue, 30 Hudson Yards is slated for completion in 2019. The tower is one of three commercial buildings in the mixed-use project, which is being constructed over a rail yard. Work at the neighboring 10 Hudson Yards is scheduled for completion next spring. L’Oreal, VaynerMedia, SAP and The Boston Consulting Group are leasing space from Related and Oxford, while Coach owns its 738,000-square-foot office condo at 10 Hudson Yards.

Related is planning to sell a 40 percent stake in the 52-story tower at the corner of West 30th Street and 10th Avenue, Bloomberg Business reported last week. At the same time, Coach is looking to sell its interest in the 1.7-million-square-foot building and lease back its space.

Meanwhile, 30 Hudson Yards is exclusively comprised of office condo space with no rental units. After selling its headquarters at the eponymous Time Warner Center, the media company purchased 1.5 million square feet at the tower, and will replace and consolidate its subsidiaries—CNN, HBO, Turner Broadcasting and Warner Bros. Entertainment—to the lower half of the building when the tower is completed.

Late last month, KKR announced that it will purchase roughly 343,000 square feet on the top ten floors of the tower. CO first reported in May that the investment firm was shopping for condo space at one of the buildings in Hudson Yards.

With additional reporting by Terence Cullen and Damian Ghigliotty.

Update: This story has been edited to include further details about Wells Fargo’s existing lease at 150 East 42nd Street.