Traditional Supermarkets Haven’t Thrown in the Towel in Manhattan 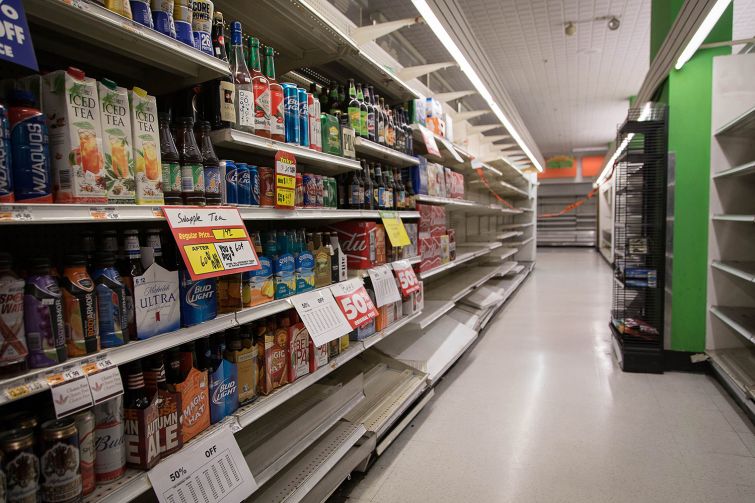 Just about every real estate and retail industry professional will tell you Whole Foods Market is clearly on the winning side of Manhattan’s grocery store wars.

While other chains have been shrinking (and in some cases disappearing altogether) Texas-based Whole Foods, which has only been in Manhattan since 2001, has been on a spree, with eight active locations around the borough and more on the way (one near Bryant Park and another in Harlem). In its fourth-quarter earnings report, Whole Foods announced that its year-over-year sales grew 6 percent to $3.4 billion.

“When Whole Foods came to the city people thought they discovered not gold—platinum,” Faith Hope Consolo, the chairman of Douglas Elliman Real Estate Retail Group, told Commercial Observer. “It just gave a whole new dynamic to the way people shopped for food. They created a meeting place when they opened on [East] 14th Street. People were meeting there to date.”

But on the other side, the traditional supermarket has been in a tailspin. Soaring rents and traffic congestion, which delay deliveries and hinder parking, have made it difficult to compete in Manhattan. And given how easy it is now to fill an online cart with groceries and have it show up at your door the next morning, some are writing the industry’s obituary.

Whole Foods also excels at pre-cooked meals, a trend that’s become popular with shoppers in Manhattan because of convenience.

Many customers think, “ ‘I don’t cook anymore but I am not going to buy garbage,’ ” Ms. Castellani said. “People are going to Whole Foods for [prepared food], too.”

All this pressure caused the granddaddy of all grocers, the Great Atlantic & Pacific Tea Company (A&P)—which controls Waldbaum’s, Pathmark and Food Emporium—to file for bankruptcy in July, the second time in five years.

Another grocer, John Catsimatidis, is currently in damage-control mode. His real estate and grocery company, Red Apple Group, is spending about $10 million to revitalize his Gristedes chains around Manhattan despite his once-powerful empire dwindling down to a third of what it once was.

Mr. Catsimatidis, a former mayoral candidate with a net worth of $3.4 billion, according to Forbes, claims to have had “nearly 100” supermarkets in Manhattan between his Gristedes, Red Apple and Sloan’s Supermarkets in the early 1990s. Today, his company owns 31 Gristedes locations across Manhattan (and one new Red Apple location in Downtown Brooklyn).

Red Apple Group only grosses about $200 million in revenue annually from its grocery stores, and loses a “few million” a year after operating costs, Mr. Catsimatidis said in a recent interview with Commercial Observer. He admitted that if it weren’t for his other endeavors—his Red Apple Group also has vast energy and real estate holdings—that he would have had to close Gristedes.

“We’re able [to survive], but only because we want to,” Mr. Catsimatidis said. “If the supermarket business was the only business that we did, we would be out of business.” (Mr. Catsimatidis can be even more blunt—when CO asked him about the worst decision of his career in this year’s Owners Magazine he said: “Failing to get out of the supermarket business 10 years ago, given what I have learned now.”)

Mr. Catsimatidis is quick to lay blame on the unions for how tough the grocery store economic climate has become.

“Look at what happened to A&P. Bankrupt. Gone, because a lot of these old-time supermarkets are fully unionized,” Mr. Catsimatidis said. “If you figure what we are paying the unionized employees, it’s probably double the non-union employees, and it’s not necessarily in salary. A lot of it is in health care and pensions.”

In bankruptcy filings, A&P also indicated that high demands from unionized employees took a toll on the company (although, it still paid $9.4 million in bonuses to top officers at the company, according to The Wall Street Journal). An A&P spokeswoman declined to comment, and referred CO to the company’s bankruptcy filings.

Aly Waddy, director of organization at Local 1500, said the union received frequent calls from employees, but every time the topic arises at a location, the company’s corporate officers come in and use aggressive measures to persuade workers against having a vote to unionize. They cut hours, for example, she alleged. A Whole Foods representative did not return requests for comment.

“What we’re finding is there is a trend in these organizations in bad labor practices,” said Ms. Waddy. “There is a lot of resistance from these companies to allow those workers to unionize.”

Another factor that has hit traditional supermarkets is that drug stores, such as CVS Health Corporation and Duane Reade, have doubled as mini-marts as much as pharmacies, chipping away at a supermarket’s typical business. (See story on drug store chains).

Despite these factors, plenty of real estate pros refuse to believe the old-school supermarket will disappear completely; it may just not be around in its current form.

“There is no more demand for what traditional supermarkets offer,” Alex Cohen, a commercial real estate broker at Core, said. “They don’t offer farm-to-market fresh produce or the boutique offerings that a Wegmans or a Whole Foods does. They have to establish some identity to survive.”

“I don’t think it’s over, but I think they have a lot challenges that they have to overcome,” said Natalie Kotlyar, the head of accounting, consulting and auditing firm BDO USA’s northeast retail and consumer products practice. “Sales is an iterative process; if the traditional supermarkets don’t change with the times, they will go extinct.”

For traditional supermarkets, surviving in Manhattan has been a game of adaptation.

Key Food Stores Co-operative, a brand of individually owned supermarkets with corporate offices in Staten Island, is known for selling inexpensive products. However, the company created high-end gourmet spinoffs 55 Fulton Market and Urban Market, which both sell organic products, as well. Urban Market has cropped up in the outer boroughs in Long Island City, Queens and Williamsburg, but the company recently signed a lease for a space in Manhattan at 70 Pine Street in the Financial District, as CO reported in November. (55 Fulton Market is located at 55 Fulton Street.) Representatives from Key Food did not respond to requests for comment.

Morton Williams, a family-owned supermarket chain that has 12 locations in Manhattan and two in the Bronx, is another traditional grocery store that also adjusted its style.

“We have tried to stay up with the trends that are prevalent with modern America,” Morton Sloan, the chief executive officer of the company, said. “We know that today’s modern family doesn’t [want] to go home and start making a roast beef. So we have gone into the prepared food market in a big way, and into selling organic products.”

The company also began offering online shopping and delivery (within two hours) or in-store pickup. Mr. Sloan said that Morton Williams has experienced more “pressure” because of Whole Foods and drug stores, but its stores are still profitable. In a sign that its new strategies are enjoying some measure of success, both Key Food and Morton Williams bought some A&P stores at a bankruptcy auction.

But for traditional supermarkets, Whole Foods isn’t the only competition to watch out for. Another grocer that has been gunning for the dinosaurs is Trader Joe’s—but rather than a pricey, high-end alternative, Trader Joe’s moved in the opposite direction.

Started in California, and now controlled by the owners of Germany-based discount supermarket Aldi, Trader Joe’s owes its success largely to off-the-charts marketing and lower-cost pricing, thanks to its own private labels on products. Trader Joe’s first came storming into Manhattan in 2006 and currently has three locations in the borough.

Even Whole Foods has taken note and is adjusting to its low-cost competitor. Whole Foods announced in June its smaller and less expensive 365 by Whole Foods Market model to help further its expansion plans, and is searching for new locations in Manhattan for the brand, as CO previously reported. Whole Foods has also promised to cut back prices on its products, and let go of 1,500 employees in preparation for that.

“This is a very difficult decision, and we are committed to treating affected team members in a caring and respectful manner,” Walter Robb, the co-CEO of Whole Foods, said in a September press release regarding the job cuts. “We believe this is an important step to evolve Whole Foods Market in a rapidly changing marketplace.”

But if traditional grocery stores are suffering, Trader Joe’s and Whole Foods would be wise to take note of the threat to their flank. The direct-to-consumer grocery store, such as Instacart and AmazonFresh, has already cultivated a consumer base and will doubtless be a force to be reckoned with. These types of grocery services offer consumers delivery of fresh products after purchasing online. Both Instacart and AmazonFresh promise same-day delivery.

FreshDirect, which is currently based in Queens, is the progenitor of this grocery model. It sources about 100 farms in the state for fresh products and delivery as early as the next day. It has an enormous presence already in Manhattan, and reportedly makes about $500 million in revenue, according to Crain’s New York Business (although representatives wouldn’t confirm that number).

“It’s a big market. People have dozens of habits for their immediate needs,” Jason Ackerman, the chief executive officer and co-founder of FreshDirect, said. “We are never going to have 100 percent of the marketplace and neither is one store.”

And even nimbler online-to-consumer versions are cropping up, such as Max Delivery, which was started just over a decade ago in Tribeca by entrepreneur Chris Siragusa. Like FreshDirect, Max Delivery focuses on bringing farm fresh and organic grocery products to customer’s doors. But the store runs on a fleet of about 55 bicyclists that deliver products to consumers (below both sides of 92nd Street) within one hour of their purchase. For heavier orders, multiple cyclists are put on the job.

Max Delivery moved in May from its roughly 5,000-square-foot space to a 10,000-square-foot location on the ground floor of 318 West 39th Street between Ninth and Eighth Avenues. The company employs about 150 people in total, and Mr. Siragusa is actively looking to open new locations in Brooklyn and other cities. Max Delivery functions solely online at the moment; however, because there is still a big market for people who need immediate service, Mr. Siragusa plans to add a walk-in component, where consumers can place orders at the location and the staff will retrieve the items from the store and bring it to them on site.

The grocery has seen five consecutive years of profits and is growing at about 30 percent in revenue each year, Mr. Siragusa said. One of the major contributors to that is that people aren’t just ordering in bulk anymore, he said, but really using the service for convenience. He believes more traditional stores will turn to his business model to survive.

“As people become used to better, more convenient service from the supermarkets, I think companies will be pushed to do something towards what we have been doing,” Mr. Siragusa said. “What we are seeing is that [customers] are saying, ‘What do we need to eat tomorrow?’ As more and more [direct-to-consumer] models come up, more and more people are going to order for the next day or two, because that’s all you need.”