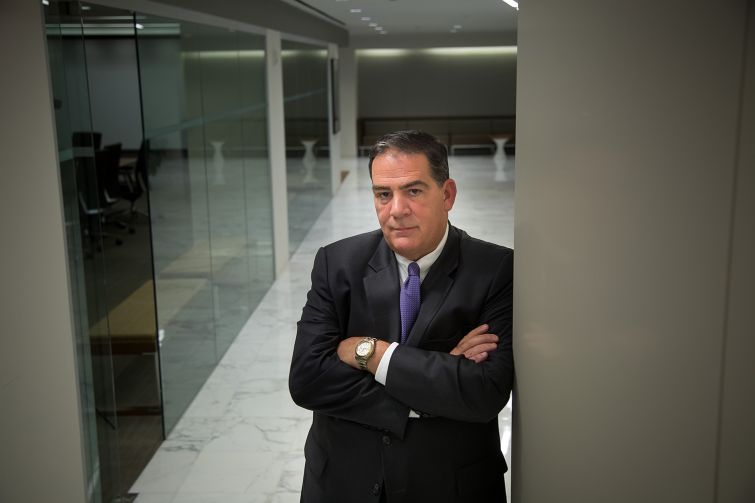 One afternoon last year, Patrick Breslin went to the Roosevelt Hotel in Midtown to have coffee with Joseph Harbert. Mr. Breslin was with Studley (now Savills Studley) and Mr. Harbert had taken over the eastern division of Colliers International in 2012. They had never met before.

The two became fast friends at the meeting. Both men are from Queens: Mr. Breslin, 54, grew up in Forest Hills, the son of famed newspaper columnist Jimmy Breslin; Mr. Harbert, 68, was born in Flushing and grew up in Bayside. Mr. Breslin was drawn to Mr. Harbert’s demeanor—he always seems calm no matter the situation and has a way of dealing with brokers’ attitudes, Mr. Breslin said.

The move was quick. As Mr. Harbert recalls, it was one of the fastest hires he’d ever done—maybe two to three weeks from the meeting to hiring Mr. Breslin as an executive managing director at Colliers. This is the third time Mr. Breslin has been at the company in one way, shape or form. When he started in the 1980s, it was Williams & Co. His return in the 1990s was to GVA Williams, which then became FirstService Williams.

At the new incarnation of Colliers, which formed in 2010, Mr. Breslin is helping the brokerage’s retail presence in New York City grow. While he couldn’t discuss the specifics of upcoming deals, Mr. Breslin said he’s trying to bring in retailers who never before have broken into the Big Apple. The rents over the term of some of these deals will be in the hundreds of millions of dollars, he added.

“We have some national tenants that have crept up to the boundaries of New York but really haven’t dived in here yet,” Mr. Breslin said. “We’re working on stuff now for several tenants to cross over the line and dive headfirst into New York real estate. Some of them are going to be quite big and quite splashy.”

Over a 30-year career, Mr. Breslin has worked retail at a slew of other firms in between his tours at the company. His résumé includes the following: CB Richard Ellis (now CBRE), Grubb & Ellis (which went bankrupt) and Studley (now bearing the Savills Studley moniker).

Colliers press officers will pitch Mr. Breslin as an expert retail broker in New York City and one of the last true rough-and-tumble New Yorkers. Indeed, Mr. Breslin can come across as a real estate executive who could easily be a tour guide in whatever spare time he has. When Commercial Observer met with him last month, Mr. Breslin referenced how his onetime employers in the concrete business bought the Halloran House Hotel at Lexington Avenue and East 49th Street. At one time, it was the nation’s largest hotel in terms of room count. In the next breath he noted, “That’s where Meir Kahane got shot and killed” in 1990.

“To put it into a rock and roll metaphor, Pat is a singer-songwriter,” said Andrew Roos, a vice chairman of Colliers, who’s known Mr. Breslin for about 30 years. “Pat is very good at telling stories and living them.”

Much like his father, Mr. Breslin loves a good story, and he told us a few when we sat down. He discussed the days walking to preschool unaccompanied with Donna Zaccarro, the daughter of 1984 Vice Presidential candidate Geraldine Ferraro, as well as the time his father hung up the phone when Mr. Breslin took an unsalaried position without benefits in real estate.

One of his more popular real estate yarns is his 1993 meeting with Arvin Goldberg while Mr. Breslin was working for then CB Richard Ellis. Mr. Goldberg was part of a three-man crew that was trying to expand AT&T Wireless from about 40 stores nationally. He also wanted to rapidly grow the retailer’s footprint everywhere.

“For four solid years, I was either on the phone, in the car or in meetings with the AT&T Wireless guys, opening stores,” he said. “The numbers were astronomical. We ended up doing hundreds with them.”

During that time, the economy of the mid-1990s slowed down. So for about a year in the middle of those four years, the hundreds of deals came to a virtual standstill. But when the market thawed, the floodgates opened wide.

The brokerage went on to represent AT&T nationally; by the late 1990s, the number of stores went from the 40 when Mr. Breslin met Mr. Goldberg to more than 2,000 across the country.

While he was enjoying that success, he also got to know the people behind Sunglass Hut, which had 17 stores. A group of investment bankers bought the company, and Mr. Breslin said the now popular eyeware retailer grew exponentially in a matter of three years.

“There was a long stretch of months where we were literally getting checks—commission checks—every day from all over the place,” he said. “It seemed to me that it was a gravy train that was never going to stop. It was good.”

Growing a company into a national retailer that’s today as common to shopping strips as Starbucks or CVS/pharmacy taught Mr. Breslin a thing or two about appealing to a mass audience. It made him more tenacious, and he played a role about every step of the way, from the development meetings to the negotiation meetings.

Haim Chera, a principal of Crown Acquisitions, said his family-owned business had worked on deals with Mr. Breslin and leased to some of his clients. He, too, said Mr. Breslin was thorough, “very aggressive and very street smart.”

“He never gives up,” Mr. Chera said. “He just gets New York, he gets retail and he gets people.”

Knowing the streets is especially important when it comes to retail, Mr. Harbert said. The Colliers executive added that Mr. Breslin had a strong sense of where his client might need to go and can read what type of tenant can thrive in a particular space.

Understanding New York and the streets of the city is something he picked up from his father, whom he speaks about with the same reverence as one would expect for one of the great storytellers of New York City. The only difference is, he saw a great deal of it firsthand.

Jimmy Breslin famously never learned to drive. After his wife, Rosemary, passed in 1981, the famed columnist would grab whichever of the six children were home who had a driver’s license.

“I’ve been to murder scenes at 2 o’clock in the morning with him for policemen getting shot in Bedford-Stuyvesant,” he said.

But Mr. Breslin didn’t want to go into the family business. He was a college student at Fordham University working two jobs. The first was an assistant at ABC News for Good Morning America, World News Tonight and Nightline. The second job was for two concrete companies in Manhattan, Certified Concrete Company and the Transit Mix Company, overseeing teamsters and engineers.

“I met some big developers while I was doing it and I was young,” he said. “Anyone that I knew that was in the real estate business—family, friends or whatnot—were all very, very, very successful.”

The people in charge of the combined companies were also in the development business, which gave him the real estate bug. After some time, he sought some advice from the late Lew Rudin, who was at the helm of Rudin Management Company, on how to make it in the real estate business. Mr. Rudin told him to go into the brokerage business.

Mr. Breslin started at Williams & Co. in 1986 where he met Mr. Roos and several other Williams executives now at Colliers. But being an office broker “seemed the doldrums,” Mr. Breslin said. He found a lot more excitement in the retail business, which he said was more about the people and the streets. The problem was no one really had a dedicated retail team. (Remember, this was the 1980s.)

“Retail was kind of an anomaly back then,” Mr. Breslin said. “They took it as it’s a part of their building and it’s not really all that valuable. It’s something that they had to have, unlike today, when retail rents are steering what sales of properties are because they’re so astronomical.”

His big break came with the Dime Savings Bank of New York during the first Williams tour. He helped the firm find retail branches in Manhattan. From there it was all history.

After overseeing retail at Grubb & Ellis until its turmoil, Mr. Breslin found a home at Studley in 2012.

“I honestly thought it was going to be the last stop on my real estate choo-choo train,” he said. “I went in there with such high expectations with growing our business here.”

Out of maybe a few hundreds brokers on the East Coast, he said “four of them were thinking about retail.” Mr. Breslin said that aside from a few big deals, a strong retail platform never materialized. Savills Studley, which was bought last year by the London-based Savills, declined to comment for this story.

There’s something almost fixer-like about Mr. Breslin’s mystique—out of the blue, Mr. Roos called to ask Mr. Breslin if he could help him get tickets to see the Allman Brothers Band at the Beacon Theater. Mr. Breslin knows everybody, Mr. Roos said. The conversation switched to asking rents on Madison Avenue. Then Mr. Roos somewhat seriously popped the question. “When are you coming back? We miss you,” Mr. Breslin recalls Mr. Roos asking.

“I said it sort of half joking, but at the time, we needed a stronger retail presence and at the time it fit,” Mr. Roos said.

And although this is Mr. Breslin’s third time with the company, Mr. Harbert said it now has a different face.

“It’s a different company,” Mr. Harbert said. “He’s coming back to something where he has relationships with people. They like him and respect him.”

The brokerage made a failed bid to boost its retail arm earlier this year by trying to buy RKF. But boosting Colliers’ Manhattan retail presence is still a top priority, Mr. Harbert said. Mr. Breslin is acting as a go-between for Colliers’ national and international teams, as well as helping Mr. Harbert recruit retail brokers.

“He is my most senior retail person,” he said. “He’s the key spokesman here at our local and international market meetings.”

“Besides the Colliers name and the way the entity was run, it still had the home feeling of the Williams that I started with at the beginning,” he said. “The stuff we’re working on now is bigger and broader than anything I’ve ever imagined that I’d be doing in the real estate business.”