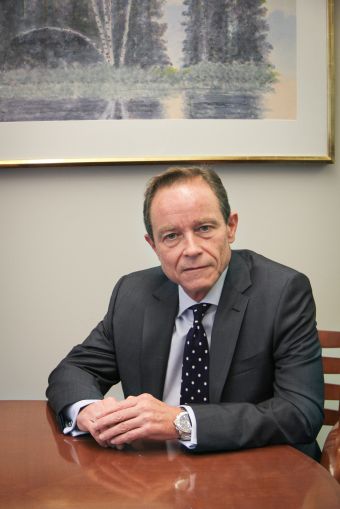 Paul Vanderslice, who works among the traders at Citigroup’s Tribeca office, is an industry veteran. He joined the bank over 25 years ago and has been in his current role as co-head of U.S. CMBS for more than a decade. In that time, he has worked through several real estate cycles, and provided Commercial Observer with some historical perspective on the market today, along with some thoughts on how the maturity wall is affecting what’s in the CMBS pipeline.

Commercial Observer: What exactly does your role entail?

Mr. Vanderslice: A good summary is to say that I’m involved in any product originated for securitization. We price loans, both large and small, off of our desk. These loans are the raw collateral backing CMBS transactions. They typically sell from the bottom up—controlling classes for large loans, B-pieces first for conduit deals. A B-piece encompasses the BB, single B and the unrated class. We pre-place these credit pieces, then we come to market with the investment-grade CMBS portion.

What are some of the biggest changes you’ve seen in the CMBS world?

Relative to CMBS 1.0, there are key structural changes made to the deal. For example, in 2.0 and 3.0 appraisal reductions as well as realized losses count against controlling class voting rights. Also, the Fair Value Option (FVO) is no longer given to special servicer.

Any concerns with deal underwriting that you’re seeing today?

What trends are you seeing in the market?

How will that affect your business?

It’s affecting it now because we’re doing a lot of refinancing. It’s a built-in current supply, and certainly a built-in for future supply. Unlike other markets, you almost have a floor on the new issue volume because you have all of these loans coming due. If you fast forward to 2018, there were hardly any deals done in 2008. So in 2018 you won’t have that new supply.

Some people think the market is going to end because there are no rollovers, but I would argue that in 2007 when there was $230 billion in new issue [loans], there were not $230 billion of loans from 1997 coming due. Debt levels help to drive cap rates, so if the market holds we should see loans in 2018 but arguably lower volume than 2016 and 2017.

What other trends are you seeing in the market?

I would say the other trend out there is in the single-asset and single-borrower portion of the market. This year so far it accounts for about 40 percent of the market, whereas for the last two years it was only 25 percent. You’re seeing a lot of these deals getting done in the CMBS market.

Why do you think that is?

I think the CMBS market is becoming competitive on the large loans with portfolio lenders.

What are your thoughts on pricing this year?

It’s widened, but then again other markets have widened, too. You have corporate supply, in which there’s been over $1 trillion of corporate issue this year, which is about 30 percent higher than last year. Spreads in corporate [bonds] are therefore wider, too. There’s a little bit of a crowding-out effect in CMBS, meaning that dollars which would otherwise go into the mortgage market are going into the corporate market. We lose dollars to competing markets like corporates.

The other observation is rates are still relatively low, so an investor needs a wider spread to get the same effective yield. I think if we were in a higher swap rate environment, you would likely see spreads tighter, because you would need less spreads to get the same yield.

Are you worried about any regulations right now?

Two big regulations on the horizon are expanded Regulation AB, which went into effect Nov. 24, 2015, and risk retention, which goes into effect Dec. 24, 2016. This will change the market, just not exactly sure how right now.

How does a big bank prepare for something like risk retention?

Risk retention will impose new constraints on the CMBS market, as well as other parts of the structured finance markets. The market will have to figure out how to deal with it and I’m confident it will.

You get prepared for risk retention mostly by educating yourself about the rules and industry market participants as much as possible. The bottom line is that nobody really knows what the overall effect risk retention will cause.