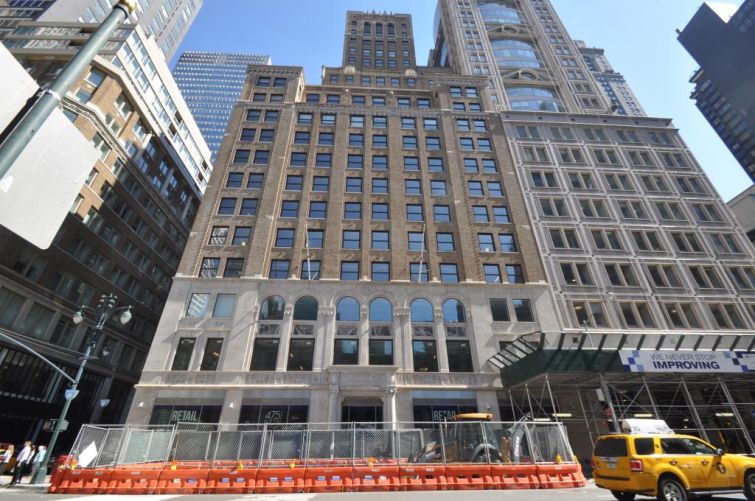 An international retailer with a specialty in denim, G-Star RAW, signed a lease for a 3,400-square-foot ground-floor retail space on the corner of Fifth Avenue and East 41st Street, Commercial Observer has learned.

The new tenant is joining Japanese retailer Muji, who signed a lease earlier this year and opened its store this week.

The landlord, TIAA-CREF, purchased the 23-story building at 475 Fifth Avenue for $143.9 million in September 2011, according to property records. At the time, the property was roughly five percent occupied, according to the firm. Norges Bank Investment Management bought into the building as a co-owner in 2013.

Todd Rollins, a senior director of asset management at the TIAA-CREF Global Real Estate, did not disclose the length of the lease, but noted that the asking retail rents in the building are in the $400 to $450 per square foot range.

G-Star will open its store in spring 2016. It has four other locations, two in Soho, and one each in Union Square and Williamsburg, according to the company’s website.

Representatives for G-Star, Muji, C&W and Thor did not immediately respond to inquiries.

“Our whole thesis in buying the building was that it’s right across from the New York Public Library and right on Bryant Park,” Kevin Smith, a senior director at TIAA-CREF Global Real Estate, told CO. “It’s a great neighborhood in Manhattan to own an office property. There’s good transit access to Penn Station, Grand Central [Terminal] and Port Authority.”

Mr. Rollins added that the purchase of the building was in part driven by the expansion of the retail corridor on Fifth Avenue.

“It’s the perfect set up for soft goods,” he said. “One of the great things about this location is that it has traffic now that’s not too different from a couple of blocks north, and they’re getting the benefit of this great location across from New York Public Library, and having an open view corridor.”

The company began planning the renovation process immediately upon purchasing the building—which was completed in 1925—and began construction in 2012. Throughout the renovation, building systems were upgraded, elevators were modernized, the lobby was moved from Fifth Avenue to East 41st Street and completely redone, and the retail space was completely remodeled to include all-glass enclosures.

“We were trying to complement the office tenants with retail tenants as best as we could,” added Mr. Smith. “What we were finding in the [office] tenancy was a lot of younger more vibrant tenants, like Bacardi Martini, Pinterest and Penske Media. We think G-Star RAW fit in with this type of mentality, which is young and hip.”