After Years in New England and NJ, Ceruzzi Properties Is Making a Big Play for Manhattan 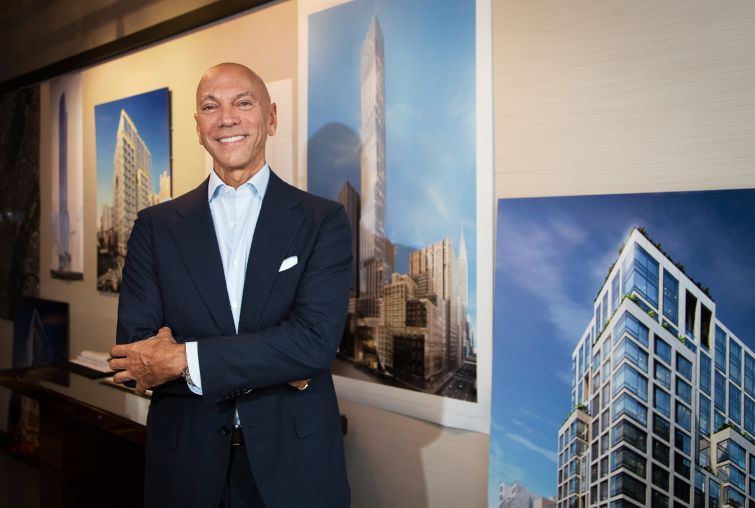 Back in 2000, the Baltimore Sun wrote an article about Louis Ceruzzi, head of the Connecticut-based Starwood Ceruzzi, which described him as having “built a reputation recycling obsolete shopping centers in the Northeast.” But things change in 15 years. Since then, he has been more active with his New York City-based Ceruzzi Properties, and has become a more holistic developer. And in the last four years, he has made inroads into Manhattan.

“The goal was always to do that,” he said. “That’s the big leagues—everybody’s dream.”

As Commercial Observer reported in September, Ceruzzi Properties is enlarging its Midtown offices by nearly 50 percent to 15,591 square feet, spanning the entire fifth floor. The company only moved to that office, at 400 Park Avenue at East 54th Street, last year, after 10 years on East 61st Street and Madison Avenue.

The expansion is to help the firm keep up with its three biggest projects: a mixed-use development at 520 Fifth Avenue between West 43rd and West 44th Streets, a condominium at 138 East 50th Street and a mixed-use development at 147 East 86th Street. That’s not even taking into account the firm’s recent partnership with Shanghai Municipal Investment USA to buy the $453 million ground lease at the Lipstick Building at 885 Third Avenue. (That 67-year lease deal is slated to close on Dec. 18.)

Mr. Ceruzzi has also been successful in the restaurant sector as the owner of several establishments, including New York’s Italian eateries Via Quadronno, Bar Roma, Bottega del Vino (which will be closing on East 59th Street at the end of this year) and Sfoglia, and Nantucket, Mass.’ Lola 41, Lola Burger and Station 21. Along with celebrity chef Geoffrey Zakarian, he plans to open a Greenwich, Conn. location of The National this week, in a new three-story, mixed-use Ceruzzi building.

The 62-year-old married father of two, who wears an ebony wood bracelet with a cross, similar to rosary beads that comes from the Brazilian rainforest, as well as a Cartier gold ring in the shape of a nail, has been in real estate for 30 years, starting Ceruzzi Properties 20 years ago. His daughter, Gabrielle, 34, works in the office for another company in which Mr. Ceruzzi is invested—SoloFresco, which creates and produces food based on the Mediterranean diet for the city’s public schools. His son, James, 23, recently graduated from the University of North Carolina and works in a student housing company in which his father is a large partner. It’s called Park-7 Group.

On a personal level, Mr. Ceruzzi was the subject of tabloid fodder last year after appearing on the first season of Southern Charm. He declined to address the topic with CO, but spoke openly about his new projects, the restaurant business and transitioning from law to real estate.

Commercial Observer: In August 2013, you bought 138 East 50th Street and 141 East 49th Street, plus air rights from Gary Barnett’s Extell Development. What was the total price?

Mr. Ceruzzi: We are in that land today. I think our total number for the land and air rights and closing costs and carrying loans is about $120 million. We hope to start construction by the end of the year. It’s in the high-$130s today with all of the plans and everything else that’s been done at the property, and also the demolition.

So, how much square footage is in the air rights?

What happened to building a hotel at the site?

At one point it was going to be a hotel, but it’s not [anymore]. The property became too valuable for the hotel use. There is so much value, we believe, in high-end residential condos in this part of Midtown.

Do you have anything new to report about the East 86th Street project, where you have partnered with Stillman Development International and Kuafu Properties?

We hired the firm of Shelton, Mindel & Associates, a very, very high-end interior design firm to work with us to do the interiors, and they’ve done, really, a spectacular job.

You are looking to receive $49.5 million in EB-5 funding at East 86th Street. How’s that coming along?

The first EB-5 investors [are] sending their monies in.

When are you starting construction on the three big projects?

Do you have any investment in the former Elaine’s restaurant at 1703-1705 Second Avenue?

I am a restaurant owner as a hobby. I mean, it’s a business, and, you know, we like it when they make money, and almost all of them make money for us, but it really is my hobby.

How did you get started in real estate following law school?

I started out as a lawyer. I practiced for about five years—tax law, and predominantly real estate tax law. I worked at a firm in New Haven, Conn. At the time it was called Copelon, Schiff & Zangari. I don’t even know what the name is today because I haven’t been involved for 30 years. I think because of Yale University being there, there was a place where only three firms did tax law. So, we would take in work that would be referred to us by other firms that didn’t have large tax departments, and do that work, but, you know, return the client back to the firm that was doing all of its work. So, it was an intellectually stimulating practice. There were a lot of very, very bright and talented people that I was able to work with every day, but I also saw the difference in the remuneration of our clients that were in the real estate development business as compared to myself and my colleagues who were practicing law, and so I decided to make a switch.

That’s why you went into real estate?

Yeah, and it was just so much more interesting to actually be there and to create something. And, you know, to make the decision on what it was going to look like.

How did you know what you were doing when you made the transition?

I really didn’t in the very beginning. The first time I built a shopping center, a bank came to me, because I was a lawyer, and asked me, did I think any of my clients would be interested in this property in the town of Orange [in] Connecticut that they had just foreclosed on. So, I said, “You know what, I would,” and we cobbled together some money. We built it. I learned the business by building a shopping center and we grew from there.

Is it still around?

So how many shopping centers do you own at this point?

And where are all the centers?

Have anything in New York City?

The only thing that we own in the city is between 16th and 17th Streets, on the west side of Seventh Avenue [where Williams-Sonoma and Hold Everything are tenants].

What was the first building you erected in New York City?

We built on the northwest corner of 17th Street and Seventh Avenue in like 1995. It was the parking lot for Barneys, which was located at the southeast corner of Seventh Avenue and 17th Street, and it had moved uptown. So, when the parking lot became available, we purchased that site. That was the first building we ever built in New York and we did condos there, and we had a retailer on the first floor of the building.

Why did you decide to build pied-à-terres rather than a hotel at 520 Fifth Avenue?

It was a little bit of a tight site. And you know, with having a loading dock for the hotel so they could service the rooms with laundry and uniforms and trash and so on and so forth and then not only have the loading dock on the first floor and a separate lobby for the hotel—it really made the building somewhat inefficient with different levels of elevators going to different floors and different places.

The retail is just so valuable that we wanted to be able to maximize our ability to profit from that. And also to be able to have a large continuous block of space on the first floor on Fifth Avenue, that probably would be needed in order to get a larger tenant in there on two floors. A tenant would want as much space on floor one that they could have. [A hotel] would cut into the retail.

And now for a sort of random question: do you have any connection with Fred Ceruzzi of Ceruzzi Holdings?

Don’t even know who he is?

No idea. My father had a brother named Fred, but he’s long dead.