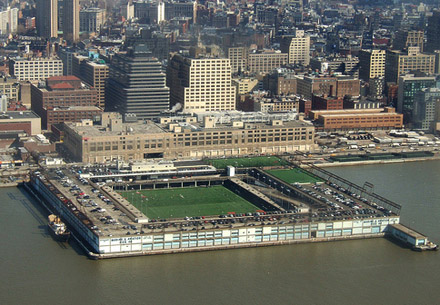 The de Blasio administration has reached a deal with a developer, local officials and the Hudson River Park Trust to sell Pier 40’s air rights for $100 million, the mayor’s office has announced. The deal, which was first reported in The Times, will provide direly needed funding for the long-ailing Pier 40, a former cargo terminal along the Westside Highway that is now used for athletic fields and parking. It will also allow real estate concern St. John’s Center Partners to redevelop the nearby St. John’s Terminal site, which has been dormant for decades, into a 1.7 million square-foot 5-building campus.

Of that, 1.3 million would be devoted to housing, divvied up among 1,586 apartments, 30 percent (approximately 500 apartments) of which would be designated as permanent affordable for seniors, low- and middle-income New Yorkers. The COOKFOX design, which will need to go through the city approval process, would spread that square footage out across five buildings, ranging from 240 to 430 feet tall.