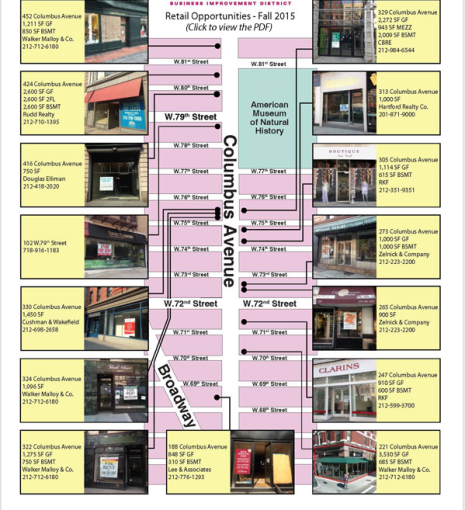 “We were bragging a couple of years ago we were at 100 percent occupancy,” Barbara Adler, the executive director of the Columbus Avenue BID, told Commercial Observer. “Now there are some vacancies.”

“Right now there’s a lack of equilibrium between tenant and landlord expectations that is evidenced by a higher than normal number of vacancies,” Mr. Evans said.

Amber’s parent company, Amber New York City Restaurant Group, is opening a Japanese table-stop barbecue joint at 100 West 82nd Street off of Columbus Avenue, as CO reported yesterday. The space was previously occupied by oyster bar and fish shack Ditch Plains, who left after a few years because the “rent at this location is no longer sustainable for us,” Ditch Plains owner Marc Murphy said in a letter last September. The taking rent at 100 West 82nd Street is $30,000 per month, Mr. Evans previously told CO.

The spike in retail vacancies is part statistics, part a lack of creative tenants and part landlords getting overzealous in their asking rents, Mr. Evans explained.

“You can’t be 100 percent [vacancy-free] forever,” the broker said. “And then among the well-known shopping avenues, there’s a slight case of retail malaise. There really is.”

To make it on the Upper West Side, tenants need to think outside the box. For example, Think Closet was at 324 Columbus Avenue between West 75th and West 76th Streets for four years before shuttering. “I just don’t think that their merchandise was all that compelling,” he said. “It was just another little dress shop.” He is marketing Think Closet’s former 1,096-square-foot space.

He added that landlords are reading in the media about retail spaces going for exorbitant prices and thinking they can ask for more rent than is reasonable in their areas.

“Columbus Avenue has no billboards,” Mr. Evans said. “They are real stores. Rents have gone through the roof in a few specialized locations, and it has nothing to do with real commerce. And that hurts.”

Landlords and tenants aren’t necessarily on the same page.

“[The landlords] are being more selective and are looking for more stable tenants as a result,” said Stanley Lindenfeld of Lee & Associates NYC, who is co-marketing Wink‘s former 848 square feet on the ground floor and 310 square feet in the basement at 188 Columbus Avenue between West 68th and West 69th Streets.The asking rent is $350 per square foot, Mr. Lindenfeld said. “If they think they can be more selective they will be.”

Chris Doeblin, the owner of independent bookstore Book Culture, opened in a 2,935-square-foot space at 450 Columbus Avenue between West 81st and West 82nd Streets last year. He said business has been thriving.

The asking rent, according to Walker Malloy’s website, was $35,000 per month at 450 Columbus Avenue. His taking rent in the 10-year deal was reasonable, he said, declining to be specific, because his space is fairly large and it’s on the northern end of Columbus Avenue.

As a member of the BID, he said he has heard about some landlords who are “ambitious with rents,” as property values go up, but he assured that the area is “going through a settling out phase.”

While some folks say they see Upper West Side taking rents leveling off now, ground-floor asking rents between West 66th and West 79th Streets along Columbus Avenue rose 24 percent to $447 per square foot in spring 2015 from the same period a year earlier, according to the spring 2015 Real Estate Board of New York retail report.

Retail rent hikes are impacting deals, and not just on Columbus Avenue, or even the Upper West Side.

“I don’t think [the increase in vacancies] is unique to Columbus Avenue,” Ms. Adler said. “It’s on Amsterdam [Avenue] and Broadway; it’s just all over the West Side. I think the city has more [vacancies] in general.”

REBNY’s report indicates that ground-floor asking rents increased in all but one of the Manhattan corridors surveyed, year over year. One neighborhood that has taken a beating as of late is Soho. In late-August, CO reported that the trendy Downtown neighborhood was seeing a spike in vacancies as rents surged beyond what tenants could justify based on sales.

“I think the Upper West Side has become kind of like a Madison Avenue west,” Mr. Lindenfeld said. “And as a result, landlords are getting more particular about the tenancy as they want to increase the value of their properties. As a result, rents have gone up which kind of precludes the older tenants who might have gone there before.”

At 416 Columbus Avenue between West 80th and West 81st Streets, Faith Hope Consolo, the chairman of the retail group at Douglas Elliman Real Estate, is leasing 750 square feet for the landlord. The previous tenant was New World Coffee, which had been there for nearly 20 years.

One man’s loss is another man’s gain.

“As for the vacancies, several leases have expired over the past year and there are now good opportunities,” Ms. Consolo said, “and simultaneously there have been some new deals made while others are in process.”