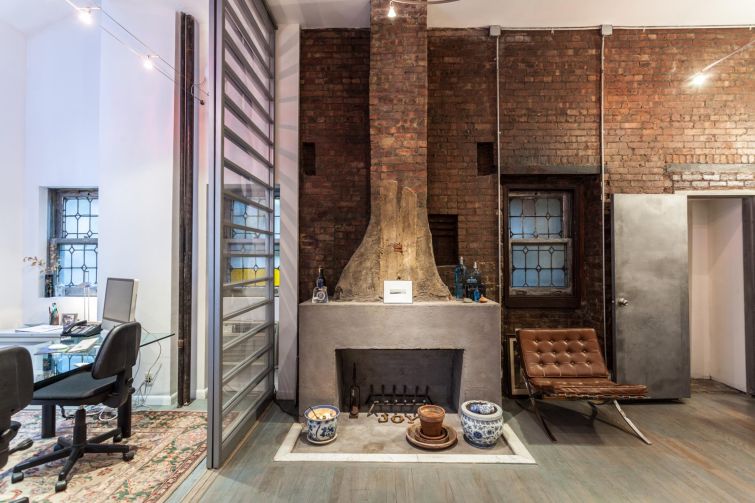 When Joy Greene and her husband and business partner Muts Yasumura bought two commercial condominium units (1A and 1K) in 32 West 40th Street, across the street from Bryant Park, more than 20 years ago, they found a space that was by no means what it had been when it was built in 1907.

Many of the original features of the space in what’s known as the Engineers’ Club Building—where Andrew Carnegie hobnobbed with Nikola Tesla and mining expert (and later President) Herbert Hoover—were missing after years of renovations.

While the space had been changed for a modern look, the couple decided to restore as many of the original features as possible, including the original beams, stained glass windows and fireplaces. Today, they use the two units as offices for their brand design company, MUTS&JOY&, and have put them on the market with a combined asking price of $3.1 million. Frederic Maingois of The Corcoran Group is handling the sale. They believe these condos will be attractive for a law or creative firm, because the units sit in the back of the building and have no frontage on West 40th Street.

The units are past the lobby, which the couple helped redesign and even donated chandeliers to when the building’s entrance was revitalized years ago. The units are separate, but share a small kitchen that allows access from one to the other. And the kitchen looks out onto a private outdoor courtyard.

The couple tried to replicate the details of as much of the earlier Engineers’ Club as possible in its renovations over the years. The original bricks on several walls and wooden beams—there when Mark Twain would stop by for a Scotch and a cigar—have been exposed for a gritty, urban feel. Ms. Greene said the once-crumbling fireplace was restored with a concrete base to ensure it survived. Just don’t try and make a fire: it isn’t functioning because of city fire codes.

Carnegie and other investors commissioned the building in the early 1900s to house the Engineers’ Club—a society for the great mechanical thinkers at the start of the 20th century. Carnegie alone doled out $1.5 million in 1904 for the design and construction of the building.

A steel beam with Carnegie’s signature was also exposed; it’s something that Ms. Greene said was important to the history of the space.

“When we saw the signature, we knew that it was the signature beam,” she said. “We just said, ‘Oooh, we’re not covering that up.’ ”

The original skylight in unit 1A was concealed when Ms. Greene and Mr. Yasumura first took the space, part of which had once been used as the club’s tavern. She said they decided to restore it—as well as several other windows—to bring in a little light, while keeping the building’s original character in place.

“A lot of these ideas happened when we got in the space,” she said. “We just tried to bring back some of the originality of the space.”

The ceilings were also about nine feet high when they started on the project, but whoever buys the units (one of which can be converted to residential for a live-work set up) will inherit ceilings that were brought back to the original 14 feet with their wooden beams.

That’s not to say everything is how it was when Carnegie and other industry titans commissioned the structure at the turn of the century. The current offices have modern walls, desks and countertops incorporated into the original industrial look. Not to mention, there is baseboard heating and fluorescent lights.

One key aspect of this design was to integrate Bryant Park across the street, Ms. Greene said.

“When we started thinking about the space, you almost had to start with thinking about what the park’s advantages are in the Midtown area,” she said. “So many times we’ll take the creative staff and we’ll go across the street into the park; we’ll have coffee, brainstorm or talk about issues.”

Having a 300-foot-long by 215-foot-wide lawn at your doorstep—now, that’s an amenity.