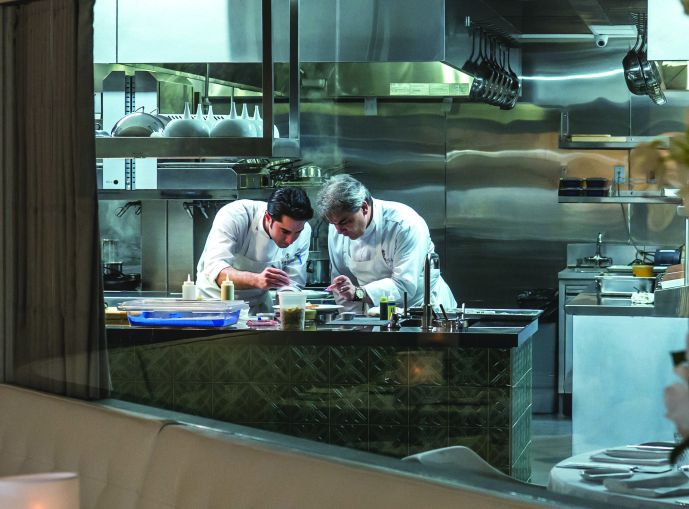 This June, the Grace Building (1114 Avenue of the Americas), designed by Skidmore, Owings & Merrill in the early ’70s, welcomed what many consider the most ambitious new restaurant in the city: Gabriel Kreuther, which is named for its chef. Ambitious here means fine dining, a category all but forgotten in today’s comfort-cheap food frenzy. And all it took to remember was a group of out-of-town private investors represented by Eben Dorros, president of a Jackson Hole, Wyo.-based bakery with a location in Chicago.

Mr. Dorros, who holds both a masters in music and film composition and a MBA in music business from NYU, said he and his partners set out to create something special in New York. “Gabriel’s style is unique in of itself, so the concept was simple: share Gabriel with the world and not under the umbrella of another concept.”

Mr. Kreuther came to New York City in 1997. He worked his way from sous chef at La Caravelle to chef de cuisine at Jean-Georges before taking the executive chef role at The Modern, the position he’s most known and lauded for. Fans will recognize Alsatian themes in the new restaurant’s menu. Think French and expect sauerkraut and tarte flambee.

But before dishes can arrive at a table a space must be procured. Mr. Dorros said Mr. Kreuther wanted a space that would accommodate many seats (the current dining room has 80), could have two full kitchens (one for private dining), and a bar-lounge area. Ideally the space would be in Midtown to accommodate Mr. Kreuther’s regulars and friends and, because, “Midtown is always going to be Midtown and the center of New York,” said Mr. Dorros. “We would not settle for this venture and took as much time as needed to find the perfect space.”

In February 2013, after about eight months of searching, Team Kreuther was shown 41 West 42nd Street: a space on the south side of the Grace Building, facing Bryant Park, by RKF Managing Director Spencer Levy. “We only showed Gabriel 10 sites in total and knew that this site would be the one. The negotiations took some time but we drafted our offer two weeks after we toured the space,” said Mr. Levy. “We got in before 7 Bryant Park was built, before 1095 Avenue of the Americas was occupied and before the area became sought-after by luxury retailers like Tourneau. The physical layout of the space with equal square footage upstairs and downstairs made the blended rent an attainable number. It was the right fit.” 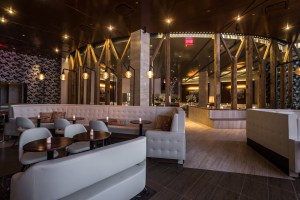 Total square footage was 13,292: 6,008 square feet on the ground and 7,284 square feet on the lower level. Another 800 square feet in the lower level was added after the 20-year lease was signed, bringing the total space to 14,092 square feet. Asking price was $200 per square foot for the ground level and $75 for the lower level. Mr. Levy and Associate Michael Yohai represented Gabriel Kreuther; the Teton Restaurant Group in the deal signed December 31, 2013. Brookfield, which owns the building with The Swig Company (Benjamin Swing and Jack Weller developed) was represented in-house by National Director of Retail Leasing Edward Hogan.

Glen Coben of architectural and interior design firm Glen and Company was hired that day, following six weeks of phone calls with Mr. Dorros, coffee with Mr. Kreuther across Bryant Park, and a formal presentation.

“We wanted and needed this design to be unique and not have guests walk in and say, ‘Oh this is a so-and-so design,’ ” said Mr. Dorros. A bullet point from the original RFP stated: We don’t want to be trendy but rather invent the new classic. “We went through many iterations along the way and Glen was always accommodating because Glen was telling the story, but to tell it, he first had to hear it,” said Mr. Dorros.

The story of Mr. Kreuther’s life, that is: born on a family farm in Alsace, raised on traditional Alsatian food, mentored by his uncle, whose copper pots sit on a kitchen shelf visible to diners. One side of the dining room is surrounded by lovely rustic and historic American walnut beams (1880s barn), a subtle screen. It’s a nod to Alsatian architecture that somehow (design!) enhances rather than detracts from the overall elegance. 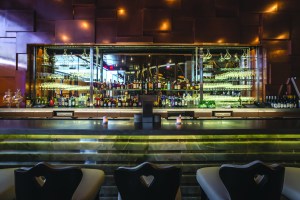 Design started Jan. 2, 2014. A lease provision stated the landlord needed renderings showing the location of all utility connections in and out of the space. “Once past that hurdle, we could breath and actually create the design,” said Mr. Coben. The biggest challenge was the cellar and the fact that the space included three floor elevations that could not be merged into one.

Several years ago, said Mr. Levy, there was a code change that specified that Type 1 venting could not be co-mingled between floors without getting a variance. “Because 41 West 42nd Street was not previously a restaurant and because the Grace Building is landmarked, the venting issue was extremely complicated. More so than the economics of the deal, the tenant’s tenacity on this issue is probably the reason we were able to secure this competitive space.”

Mr. Coben brought in Maryland-based Yui Design—he’d worked the food service specialists on Del Posto—to navigate. “It’s extremely complicated to plan a single kitchen on three floors, accounting for each floor-area’s location, size and height,” said Jimi Yui, who first visited the space in December 2013. He saw an opportunity to connect the street-level and basement-level kitchens with a back-of-house stairwell, thanks to an existing overlap of the two floors.

But where to locate the receiving and trash area? And the employee entrance and facilities? And the storage and kitchen specific to events in the private space? Mr. Yui refers to this as a “puzzle.” Finally, he said of the linear sequence of improvements over three months, “on the 15th iteration we got all the big organizational issues as well as the details required by chef to converge.” 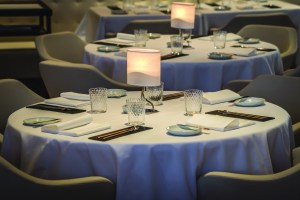 Early last summer the design team was ready to bid and file with the DOB. Mr. Coben credits Building and Zoning Law Consultants William Vitacco and Associates with the expediency of the process. Construction began September 2014.

“Every tiny detail came to be after hours, weeks and months of thoughtful decisions,” said Mr. Dorros, who is involved daily with the business financials. “When you walk in, you are taken in by the beauty and luxurious space for which to dine and when you sit, you are enveloped by the comfort around you.”

Ambition, clearly, is a virtue.