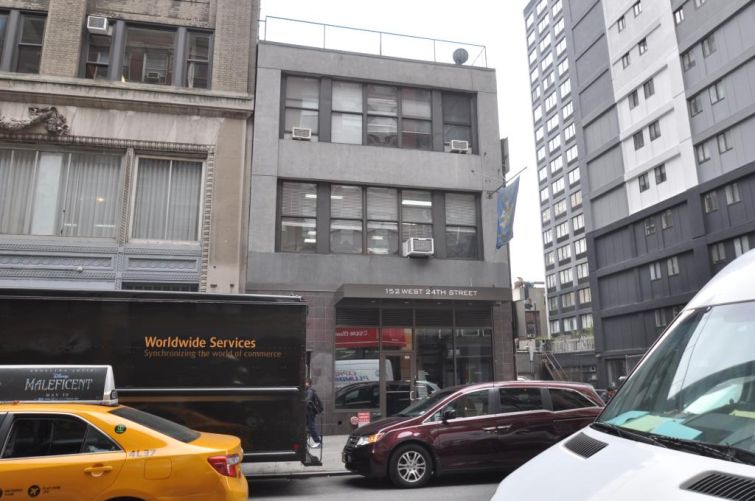 Gary Barnett’s Extell Development has purchased a small retail and office building in Chelsea for $8.7 million, property records indicate. The seller was IATSE Local 798, a labor union of makeup artists and hairstylists.

Extell closed on the purchase of the 1900 building at 152 West 24th Street between Avenue of the Americas and Seventh Avenue on Aug. 10 and it appeared in public records on Monday.

The building is three stories and 8,890 square feet, according to the Denham Wolf offering memorandum. With a floor area ratio of 10, Extell could erect a 25,000-square-foot building on the 2,469-square-foot lot. The building lies in a manufacturing zone so no residential use is permitted. The 17,500 square feet of development rights could also be transferred to a nearby site; Extell owns the adjacent 142 West 24th Street.

The union, which is temporarily located at 1370 Broadway near West 37th Street, had owned the building since 1997.

“Our membership voted to sell the building because we did not want to continue maintaining and repairing a building that wasn’t meeting the needs of our organization,” emailed Cynthia O’Rourke, the secretary and treasurer of Local 798. “We decided to purchase a condo unit at 70 West 36th Street which will be our new headquarters. Our office operations will continue at a temporary office space at 1370 Broadway until renovations are complete at our new space.

Paul Wolf and Stephen Powers of Denham Wolf negotiated the deal on behalf of the union. About a year ago, Denham Wolf helped the union purchase a condominium unit at 70 West 36th Street. The union will move there in a few months, Mr. Powers said.

As for the West 24th Street property, Mr. Powers told Commercial Observer: “We were looking to sell the site to a hotel developers because a hotel is the highest and best use. It was really important to the nonprofit to have certainty.”

That made Extell a good selection as a buyer because the non-profit could enter a contract with Extell and receive a large security deposit plus stay in its West 24th Street home for a period of time for free, Mr. Powers said.

Update: This story was edited to include comments from the seller, the seller’s broker and the correct representative for Extell.