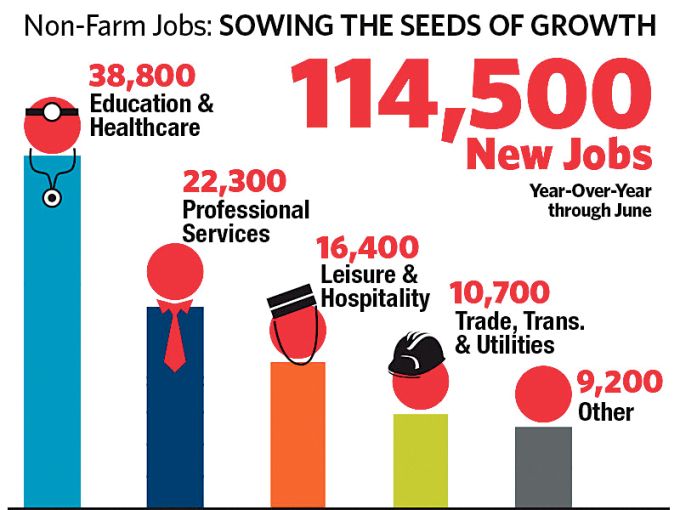 The preliminary midyear employment numbers are in, and New York City total nonfarm employment experienced some big gains. Year-over-year through June, employment gains totaled 114,500, as all major industry sectors posted positive growth, except manufacturing. Manufacturing, which has been losing jobs in New York City for more than the last two decades, shed another 1,700 jobs. Even with more than 114,000 jobs created, job gains are down 11.3 percent from the same time in 2014 when 129,100 jobs were created. Office-using employment, which is made up of the professional, financial and information services sectors, is up as well with 30,700 jobs added. Although the financial sector only added 7,100 jobs in the past year, at 460,900, this industry is at its highest level since September 2008, but still 6.8 percent off historical highs.

Professional services had the second-largest employment gains over the past year with 22,300 jobs created. Employment services created 3,900 jobs—the most jobs within this sector. The tech sector and accounting firms both added 3,500 jobs, while the advertising industry created 3,000 jobs. Although legal services only added 800 jobs year-over-year in June, it is the first year since June 2012 this industry created jobs.

Leisure and hospitality ranked third in jobs created with 16,400 over the past 12 months, followed by the trade, transportation and utilities sector, which added 10,700 jobs. Rounding out the top five is other services, which added 9,200 jobs in the past year with 4,300 jobs added in the nonprofit sector.

Richard Persichetti is vice president of research & marketing at DTZ.