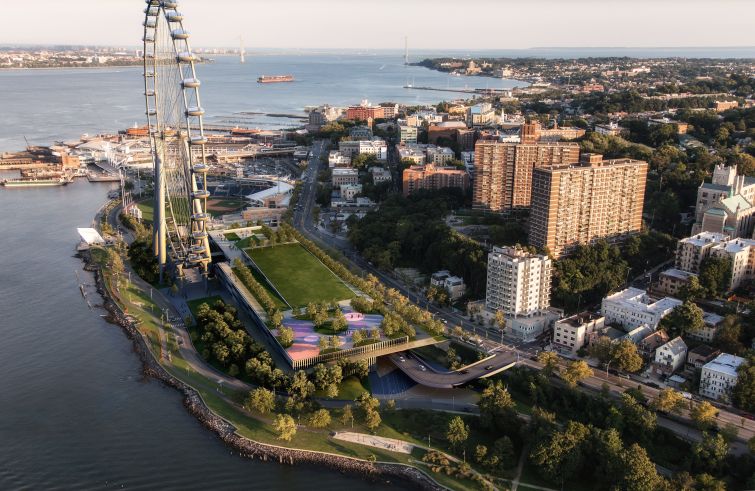 What’s expected to be the world’s largest observation wheel might not be finished until 2017, but its parts are expected to start arriving this coming February, according to the wheel’s developer, as the foundation work is currently underway.

The pieces that will eventually make up the $500 million, 625-foot New York Wheel will start coming to the north shore of Staten Island in February, Richard A. Marin, the president and chief executive officer of developer New York Wheel LLC, told Commercial Observer. The crews constructing the wheel are expected to take over the site at the beginning of 2016.

A temporary jetty will be built at the site next month to accommodate the parts’ arrival, he said.

It’ll be a busy September for the developer. Changes to the parking lot are set to go before the City Planning Commission on Sept. 9 for a public hearing. New York Wheel LLC originally cleared the Uniform Land Use Review Procedure in 2013, but has since made changes to the project. It will reduce the size of its parking garage by nearly 25,000 square feet, as CO reported last month, while maintaining its capacity.

Construction can proceed on any part of the project that doesn’t involve the aspects under review. So in the meantime, Swedish construction giant Skanska is building the foundation, which it commenced in May, when the developer secured financing for the project. The foundation for the Ferris Wheel will be held up by 96 cassons below the foundation, Mr. Marin said.

“We are barrelling ahead with our construction,” he said following a news report indicating that has just commenced.

While Borough President Jimmy Oddo supports the project and the local community board approved the change, the construction site has drawn the ire of some Staten Islanders, who told the local Staten Island Advance today that the windows on the green construction fences were too high. They alleged that the fences discriminated against people of short stature and children from seeing the site, as well as the Manhattan skyline.

The New York Wheel, officially located at 155 Richmond Terrace, is part of a massive redevelopment of the area around the St. George Waterfront. BFC Partners is working on the sprawling 1.1-million-square-foot Empire Outlets adjacent to the ferry.