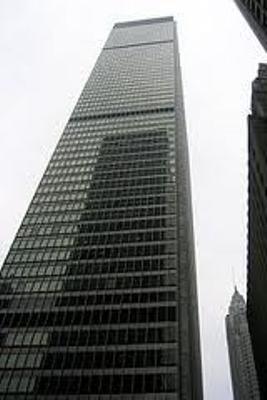 Ironshore Holdings US, an insurance company, is relocating to 28 Liberty Street between Nassau and William Streets, a building owned by its future parent company.

The company has inked a deal with China-based Fosun Group, the landlord of the 60-story building formerly billed as 1 Chase Manhattan Plaza, for 101,958 square feet across three floors, according to CoStar data. The asking rent in the 15-year deal was not immediately available.

Ironshore Holdings US is currently in about 54,000 square feet half a mile away at 1 State Street, according to The New York Post, which first reported news of the deal. That two-floor office space could likely be subleased after the firm moves, the Post reported.

Bloomberg reported in early May that Fosun Group was acquiring Ironshore Inc., the Bermuda-based company that owns Ironshore Holdings US, in a $1.84 billion deal.

Neil Goldmacher and Hal Stein of Newmark Grubb Knight Frank represented Ironshore Holdings US, and were not immediately available for comment.

JLL does most of the leasing for the 2.2-million-square foot tower, led by Peter Riguardi, head of the brokerage’s New York office. In an April interview with Commercial Observer, Mr. Riguardi said while the building isn’t necessarily the newest of Downtown towers, it’s a classic that continues to draw tenants.

“So although the building is not brand new, the quality of the building is timeless, right?” Mr. Riguardi said at the time. “And [given] the location—close to the World Trade Center, but there is no congestion—I think that the property [is] the new paradigm of Lower Manhattan.”