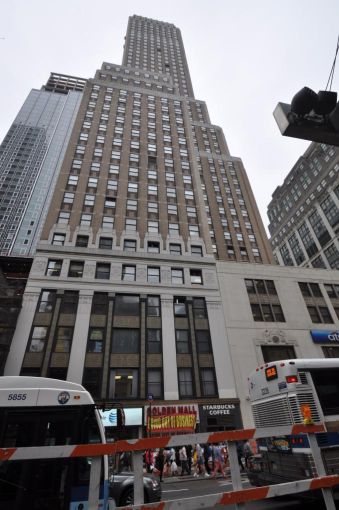 Essensys, a U.K.-based information technology company, has selected the Penn Plaza area for its first office in the United States.

The IT firm has inked a deal for 3,100 square feet on the 24th floor of 450 Seventh Avenue between West 34th and West 35th Streets, according to Manhattan Commercial Realty Corp., which represented the tenant. The asking rent for the five-year lease was in the high-$50s per square foot.

Some of the firm’s employees have already crossed the pond and are settled into the pre-built space at the Kaufman Organization building, said Robert Bielsky of Manhattan Commercial Realty Corp.

Essensys looked at more than 100 different offices before picking the 46-story, 491,253-square-foot building with the high ceilings and loft-style floor plan, Mr. Bielsky said, not to mention the views.

“It had everything they were looking for,” Mr. Bielsky told Commercial Observer. “You could see the whole city from their office.”

Other tenants in the building include the National Mah Jongg League, which in April signed a lease to relocate to the Midtown building, as CO reported, as well as Morningside Translations and David Feldman Worldwide.