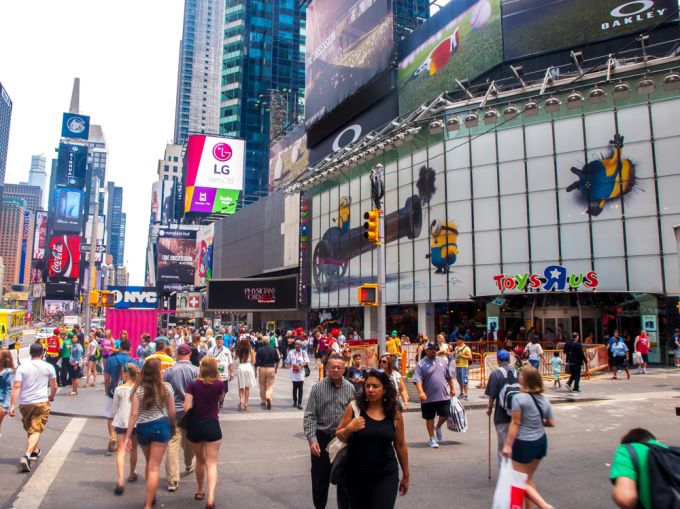 Toys "R" Us' announcement in March that it would leave 1514 Broadway kicked off a ruckus on what would happen with the massive space (Photo: Tashan Jackson/Commercial Observer). tcullen2015

If you walked through Times Square 30 years ago, the Crossroads of the World was lined with ill-reputed theaters and frequented by hookers, pimps and drug dealers. Today, you’re far more likely to be accosted by an Iron Man, Elmo or Mickey Mouse patrolling the intersection of Broadway and Seventh Avenue, under the banners of Toys “R” Us and LG—or, at worst, a Naked Cowboy.

No, the only people who can honestly claim to feel violated are retailers looking at the rents.

The recent ruckus around Times Square started when Commercial Observer broke the news in March that Toys “R” Us opted not to renew its 110,000-square-foot lease at 1514 Broadway, or the Bow Tie Building. Brokers said the toy retailer’s 2000 decision to move into Times Square was the definitive moment that the once crime-riddled neighborhood was safe for families. But as other big-name retailers, such as American Eagle and Aéropostale moved in, they said, the area became so popular that Toys “R” Us had driven up its own rents.

So who will be taking its place?

More toy companies, for one.

By Christmas 2016, visitors to Times Square might wind up flocking to Toys “R” Us’ famous subsidiary: FAO Schwarz. As CO reported last week, the famous toy retailer is closing its doors at 767 Fifth Avenue this week, but is close to a deal to shrink its size by 20,000 square feet and move into 1633 Broadway—the northern edge of the Times Square District. (An FAO Schwarz spokesperson denied that any leases had been signed, only confirming that the store was looking at space in Midtown.)

But just as FAO Schwarz is looking at a smaller and less expensive place to hang its hat, the other companies coming to Times Square are the ones who can think creatively about their leases. Like, for instance, the retailers who can sign two subsidiaries to a lease instead of just one.

‘If you’re right in the heart of Times Square, the rents are getting so expensive…it’s beginning to get Fifth Avenue. The only reason the numbers work in New York is the amount of people we have in New York City, plus the 45 million people that come here.’—Patrick Breslin

“No one could afford [that amount of space] as a single user,” said C. Bradley Mendelson, an executive vice president at Cushman & Wakefield, who represented the landlord in the deal to bring in Gap Inc. The perk, however, is the signage and exposure tenants can get in the space. “If they’re making this move at the same time they’re closing stores, they’re doing it for a reason.”

Asking rents on ground floor retail space in the district can sometimes be as high as $2,500 per square foot, according to the Times Square Alliance, the neighborhood’s business improvement district. They’ve become so costly that they’re considered on par with rents on the glitzier shopping strips, added Patrick Breslin, an executive managing director at Colliers International.

“If you’re right in the heart of Times Square, the rents are getting so expensive…it’s beginning to get Fifth Avenue,” he said. “The only reason the numbers work in New York is the amount of people we have in New York City, plus the 45 million people that come here.”

“Times Square will stay a tourist destination, capitalizing on the spending sprees that tourists go on, while also playing up to the general shopper who’s looking to buy some new threads. “The value of our retail space has escalated and escalated and escalated,” said Ellen Goldstein, vice president of planning, policy and design for the Times Square Alliance, which puts the number of visitors at 350,000 to 450,000 per day. “If you have signage in Times Square, it’s going to be seen all over the world.”

“Any major retailer would have proclaimed that Times Square had changed for the better. But [Toys “R” Us] made it a true destination for everyone, including the millions of families who come to New York for a day, a week or to stay,” said Faith Hope Consolo, a chairman of Douglas Elliman’s Retail Group, in an email. “The names may change—the names will change—but we’ve established the tone of this district, which works so well with the entertainment offerings in the neighborhood.”

“The trend really is to find a space in a good enough location where you can afford to take the minimum amount of space you need and average your rent down by going on other floors,” said Mr. Mendelson. “It’s just getting smart about how you occupy your space.”