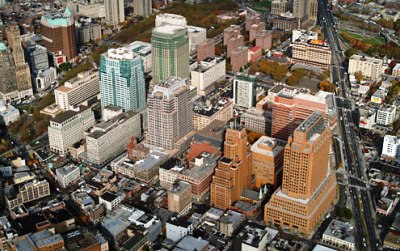 Cushman & Wakefield has entered a partnership with New York University to offer support to young companies ready to break the shell of their incubators, Commercial Observer has learned.

The brokerage will provide real estate advising on finding and leasing the right space for new companies looking to leave the university’s incubators run by the Polytechnic School of Engineering, commonly referred to as NYU Poly, and find their first physical space. Currently the school offers discounted work spaces and business support for the startups. C&W declined to provide the dollars and cents of its sponsorship.

“A significant obstacle for new companies is the ability to acquire suitable space that accommodates for potentially unanticipated growth and changing needs of the new organization,” said Ron Lo Russo, the president of C&W’s New York Tri-State Region, in prepared remarks. “Cushman & Wakefield will help nurture these companies through this critical stage informing them on real estate strategies that accommodate their companies’ changing needs.”

NYU currently has incubators in Soho, as well as in Dumbo and MetroTech, the campus where NYU Poly is based. Companies coming out of these tech incubators have hired more than 1,200 employees and raised north of $145 million in capital in the six years since the program launched, according to the school’s website. Startups usually apply to the program and those approved pay $400 per month for each workstation.

“[C&W’s] expertise and resources will go far in helping the companies housed at our incubators to grow sustainably and further contribute to the local economy,” Kurt Becker, the vice dean for research, innovation and entrepreneurship at NYU Poly, said in a news release.

The brokerage has already done work with some companies coming out of the university’s incubators, including KISI, a keyless system to unlock doors via one’s smartphone, and software developer Bounce Exchange, to lease their first spaces. C&W announced in May it was putting the keyless system developed by KISI into its New York City headquarters.

Incubators citywide have also become a popular way of fostering not just tech companies, but restaurateurs and life science startups. The New York City Economic Development Corporation has sponsored the 5,000-square-foot Entrepreneur Space in Long Island City, Queens, which is focused on helping out up-and-coming chefs. Then there’s the Harlem Biospace, which the EDC helped establish for 24 life science companies to have access to lab equipment and business support, according to the city entity’s website. There’s also the month-to-month office option such as INC39 in Midtown, which mixes the incubator concept in a shared workspace environment.

The Marino Organization, which represents C&W, is also one of the incubators’ partners in the program, along with the likes of National Grid and Samsung. The public relations firm is offering seminars and office hours to help prepare press releases and other materials.

“It’s an interesting phenomenon, startups were always trying to get in front of major corporations and now established companies are seeing the value of getting to them first,” said John Marino, the firm’s chief operating officer, in an email. “The startups housed at NYU’s incubator program are the innovators of the future, and we saw this partnership as an opportunity to collaborate at an early point in their business lifecycle.”