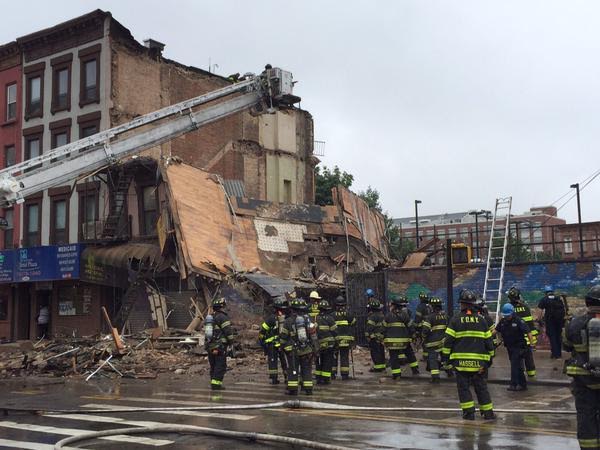 A vacant mixed-use building in the Bedford-Stuyvesant section of Brooklyn collapsed this afternoon, injuring several people.

At least three people were hurt during the collapse, the FDNY spokeswoman confirmed. They were taken to an area hospital with non-life-threatening injuries. A bicyclist was one of those injured, CBS New York reported.

A K-9 unit is searching the scene, according to police.

There were no active work permits on the building, according to an official familiar with the investigation. A full demolition application was filed in December 2014, but a permit has not been issued as of today.

The city’s Department of Buildings is currently on the scene investigating, a spokesman for the agency said. The Office of Emergency Management put out a request to DOB for a “structural stability inspection due to a partial collapse. The most recent DOB complaint against the structure was in 2012 for a fence in danger of collapsing. There was also an August 2011 complaint for falling bricks, according to DOB filings. Both were later resolved.

There are five apartments and one commercial unit in the building, property records show. News reports could not immediately confirm if the 4,000-square-foot building was occupied when the collapse began. Fulton Street is currently shut down from New York Avenue to Albany Avenue, as well as Tompkins Avenue from Macon Street down to Fulton Street, New York Police Department Transportation Chief Thomas M. Chan tweeted.

Service on the A and C trains was suspended as well, according to a Twitter account that tracks NYPD news.

Fulton Street Holdings LLC bought the building along with 1426 and 1428 Fulton Street in February 2014 for $11 million, property records show.