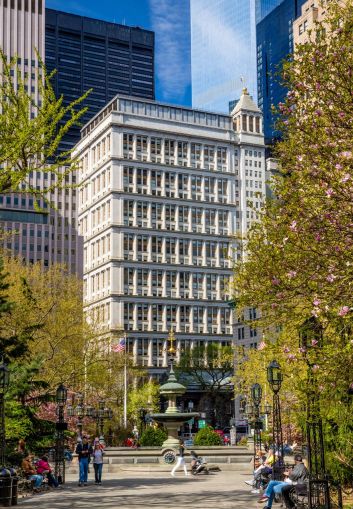 Anthropologie is set to open shop at 195 Broadway after the clothing company inked a deal for 20,300 square feet on two floors in the Downtown building.

The purveyor of women’s clothing, houseware and pricey bedding signed a 15-year lease for the Financial District space, according to landlord L&L Holding Company. Anthropologie will neighbor gourmet Japanese restaurant Nobu, which is leasing 14,000 square feet at the building between Fulton and Dey Streets, according to The New York Post, which first reported news of the deal.

Both the clothing store and the restaurant are expected to open in January 2017. Anthropologie, a subsidiary of Urban Outfitters, will be in 4,800 square feet on the ground floor and 15,550 square feet on the lower level of the 29-story building, according to C&W. It’s also the largest tenant of the 50,000-square-foot retail space in the building, and there’s still another 10,000 square feet that L&L is looking to lease.

David C. Berkey and Andrew Wiener of L&L represented the landlord in-house with Alan Schmerzler and C. Bradley Mendelson of Cushman & Wakefield. Wade McDevitt and Steven Plourde of The McDevitt Company represented Anthropologie. Messrs. McDevitt and Plourde could not immediately be reached for comment.

Asking rents for retail space in the building are $500 to $600 per square foot.

Anthropologie was the first potential tenant Mr. Schmerzler told Commercial Observer he called when he and Mr. Mendelson were hired three years ago to lease the converted lobby for retail space. The retailer had experience working in landmarked spots, he said, such as its store at 30 Rockefeller Plaza.

“In all candor, Anthropologie was the first tenant I called,” Mr. Schmerzler told CO. “They are a very design-oriented tenant.”

The landmarked building had to go through a rigorous process with the Landmarks Preservation Commission when converting the ground floor to retail, he added. Then it took close to a year negotiating between the landlord and Anthropologie on how the space would look and who would be responsible for different parts of the space buildout.

While this is a sizable deal, Anthropologie is just the latest of clothiers the landlord has been able to sign to the building. CO reported in April that Gucci was relocating its offices from 685 Fifth Avenue to 80,000 square feet at 195 Broadway.

L&L bought the building in 2005 for $206 million. The landlord and co-owner Beacon Capital Partners sold a majority stake for $498.5 million to institutional investor JP Morgan in November 2013.  L&L spent nearly a decade and $50 million sprucing up the landmarked building, which was the first global headquarters for AT&T.

“We are excited and proud that, after eight years on the drawing board, our retail vision for this magnificent space is finally taking flight,” Mr. Berkey said in prepared remarks. “Anthropologie, with its unique fashion sense, will complement our magnificent light filled retail jewel boxes and will work in concert with Nobu to bring a new level of excitement to the flourishing downtown retail landscape.”