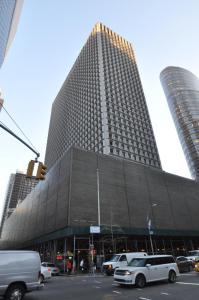 The firm finished its relocation from 40 West 57th Street between Fifth Avenue and Avenue of the Americas to its new office on June 2.

CBRE’s Silvio Petriello, Ben Friedland and Mike Wellen represented AlixPartners in the 12-year sublease for the entire 29th and 30th floors of the property, according to a press release issued by CBRE.

“While the relocation was for the same amount of space, the 909 Third Ave sublease allows AlixPartners to house significantly more employees due to better configuration, while also realizing substantial savings” said Mr. Petriello in prepared remarks.

The tenant is subleasing the space from Actavis, which is represented by CBRE’s Howard Fiddle, Anthony Dattoma and Evan Fiddle. Asking rents were in the $50s per square foot.

The 1.3 million-square-foot property at 909 Third Avenue was built in 1968 and designed by Emery Roth & Sons.

Jay Alix founded AlixPartners, which specializes in corporate turnaround and restructuring, in 1981; the company has since grown from three offices in Detroit, New York and Chicago to a global firm with a presence on four continents.