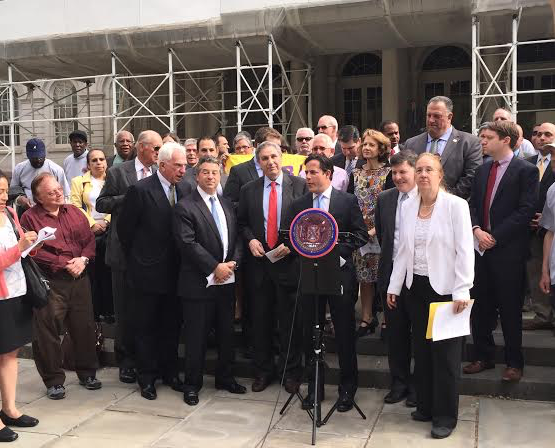 In a display of synergy between government and real estate, the New York City Council’s zoning subcommittee, which is part of the land use committee, approved the creation of a special permit to increase the density of the buildings along the five-block Vanderbilt Corridor.

“We are here today to say that East Midtown is back,” said City Council Member Dan Garodnick at a press conference this morning on the steps of City Hall preceding the 7 to 0 vote. “For too long, this area has been stuck.”

Simultaneously, the subcommittee unanimously voted to allow SL Green Realty Corp. to proceed with its plans for the 63-story, 1.6-million-square-foot 1 Vanderbilt tower within the Corridor.

The City Council had negotiated to amend the plan the City Planning Commission approved last month, both to the Vanderbilt Corridor portion as well as that for 1 Vanderbilt. These changes include better connectivity between the transit hall on East 43rd Street and the building lobby, as well as better access to the public plaza in the front of the building. As part of the arrangement, SL Green will forgo valuable retail space along East 42nd Street to deliver a second, three-story transit hall in the building, allowing for more light and better air flow. And though East Side Access, which will transport Long Island Railroad commuters from Queens’ new Sunnyside Yards station to Grand Central Terminal, is far from being completed, the Council negotiated to have better access from the Long Island Railroad to the 4, 5 and 6 subway lines.

“This is something that New Yorkers may not appreciate at this moment in time because East Side Access is not even finished, but when it is done, they are going to be thanking us for many, many years,” said Mr. Garodnick.

The proposal now must be approved by City Planning and if approved, will wend its way back to the City Council for a final vote.

“We don’t think anything here is out of scope,” Mr. Garodnick said.

The Vanderbilt Corridor rezoning will permit for buildings along the avenue from East 42nd to East 47th Streets to expand after obtaining a special permit and agreeing to make significant infrastructure improvements or by purchasing air rights from a landmarked building.

“It will be up to the public and the public review process to consider whether the density that is being sought is deserving based on the infrastructure improvements they are delivering to the public,” said Mr. Garodnick.

SL Green has committed to investing $220 million for public improvements in order for its plan to come to fruition. In its proposed form, the building at 1 Vanderbilt alone is expected to generate roughly $50 million in annual tax revenue for the city, compared to the $7.9 million the property pays today.

A recurring theme of the press conference was the superiority of this rezoning plan to that of former Mayor Michael Bloomberg. The Bloomberg proposal covered all of East Midtown, but was short on details on where dollars generated from the increased density would go in the public coffers.

Mr. Garodnick, who adamantly opposed the Bloomberg proposal, stressed that the current plan “guarantees that the improvements are delivered to the public in advance of the development.” He also said the current plan does not set a price for air rights.

“The rezoning will allow for a new, state-of-the-art building at 1 Vanderbilt,” said SL Green Chief Executive Officer Marc Holliday, who was in attendance at the press conference along with SL Green’s founder, Stephen Green. “As the largest owner of commercial properties in Manhattan, SL Green is proud that 1 Vanderbilt will be the first development to move forward under the rezoning.”