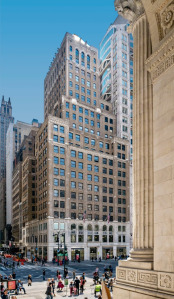 Pinterest, the website that allows users to virtually “pin” images, videos and other objects to their digital bulletin boards, has signed a lease near Bryant Park for its first New York City office.

The San Francisco-based company has secured space at 475 Fifth Avenue between East 40th and East 41st Streets, The New York Post reported. According to the publication, the office will include 32,000 square feet on the entire fourth and fifth floors of the 275,764-square-foot, 24-story building.

Asking rents range from the upper-$80s to over $100 per square foot.

In March, The New York Times reported that Pinterest was valued at $11 billion, noting that it tripled its worth in 18 months. The company was founded in 2010 by Ben Silbermann.