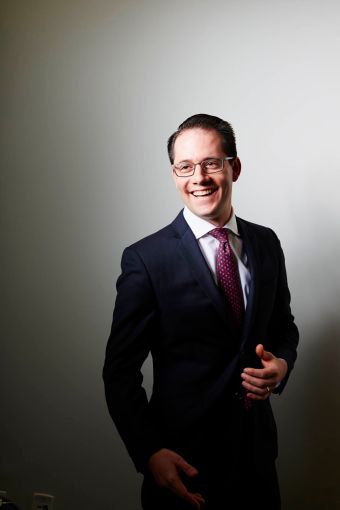 Winemaker, angel investor and scholar of the Russian language, it wouldn’t be a stretch to label Gabe Marans as a Renaissance man. And now the 29-year-old—already a managing director at Savills Studley, one of the leading commercial real estate services firms in the country—can add “Most Promising Commercial Salesperson of the Year” to his list, an award bestowed on him by the Real Estate Board of New York earlier this month.

And while those quick-to-climb professional ranks tend to be either self-made or born into privilege, Mr. Marans inhabits space somewhere in between the two: raised in Teaneck, an affluent suburb of New Jersey, his father is a doctor and his mother is a lawyer in the retail leasing industry. But despite his good fortune, no one can deny that Mr. Marans has worked hard for what he has earned.

For most of his childhood he attended a Jewish day school in the city, and the dual program of Judaic studies and mainstream curriculum meant long days on top of a long commute. “I was on a bus by 6:15 a.m. and came home around 8 p.m. for homework and dinner,” Mr. Marans said. “And the next day I’d get up and do it all over again.”

Mr. Marans said he’s grateful to be someone who not only doesn’t need much sleep, but who is also, by nature, an early riser. (He has been in the office by 7 a.m. every workday for the last six years.)

When he started college, he wanted to do something other than law or medicine, and “coming from a hard-driving Jewish family, I knew I had to get into finance…As a kid I never thought I would go into real estate,” Mr. Marans recalled.

“I engineered my entire college life toward getting into investment banking,” he said. “Then the world fell apart.”

When the 2008 financial crisis hit just shy of his college graduation date, Mr. Marans began to scramble for work. “Graduating in 2009 was a horrible time,” he said.

“I [reached out to] everyone on my contact list, which at that age really means my parents’ contacts,” Mr. Marans said, laughing. As fate would have it, one of those contacts connected him with David Goldstein and Greg Taubin, top executives at Studley (which became Savills Studley after it was acquired by Savills last year). And at 22 years old, with a degree in hand, he took a summer internship working with the firm’s top-producing office in New York.

By the end of the summer, “we had the understanding that I would secure my broker’s license and come back.”

The effects of the Lehman Brothers collapse did not bode well for new college graduates in finance (and many other career paths). With confidence in the market all but lost, companies shied away from taking on new employees. “Companies realized they could be here today but gone tomorrow,” Mr. Marans said. “[Studley] stopped taking my phone calls…and by March they still hadn’t called me.”

Not one to sit around, Mr. Marans took the LSAT and began compiling applications for law school. “The only thing stopping me from going to law school was the fact that I had no interest in being a lawyer,” he admitted. He dodged a bullet; days before sending out his applications, he heard from Goldstein and Taubin, who told him he’d be starting on Monday.

WHEN THE RUBBER MET THE ROAD
Of course, Mr. Goldstein and Mr. Taubin had reason to be relieved that Mr. Marans didn’t go to law school, too; he is consistently one of Savills’ highest producing brokers, and has to date generated over $726 million in 71 transactions, equating to 1.6 million square feet.

His time at Savills Studley has been peppered with some big-name clients. In 2012 he helped tech company MongoDB relocate to and expand to 30,000 square feet at 229 West 43rd Street, the former New York Times building from its 12,000-square-foot short-term space at 568 Broadway; the company is now valuated at more than $1 billion. He won an exclusive leasing assignment for Cammack Retirement Group, helping it to relocate and renew at 40 Wall Street; he’s also played a notable role in transactions for giants like Ralph Lauren, Tiffany & Co. and First New York Securities.

Mr. Marans does everything from identifying space and proposal drafting to analytics and lease negotiations.

One of his more recent accomplishments was helping the Major League Baseball Players Association secure a long-term renewal of 20,000 square feet at Tower49, a high-end office building located at 12 East 49th Street in February. The sports union had been a tenant since the early 1990s.

On the landlord side, Tower49’s exclusive leasing agent and asset manager with RDB Realty Advisor, Robert Bakst, was pleased with how the deal panned out.

“It was very important for the building to keep this tenant, and [Mr. Marans] was incredibly knowledgeable, represented his client well and is one of the stronger brokers I’ve had the opportunity to deal with,” Mr. Bakst said, adding that he believes MLBPA chose Savills Studley because Mr. Marans and his associates are known to be extraordinarily confident on the tenant rep side.

Mr. Marans brings the same knowledge to his angel investments and has helped them find space. One startup that he backed (which he declined to name) was looking for space—a dubious challenge for a relatively new company.

“Most people wouldn’t give this answer, but if you’re like most startups, your cash flow is incredibly sensitive and you need the best deal,” Mr. Marans said. “You want to make it easy to recruit employees, so you need a highly commutable location. If you’re a millennial you probably live in Brooklyn or the Jersey waterfront. That description really points to Downtown Manhattan,” an area, he said, that is offering the greatest value at the moment.

“I don’t discriminate between Midtown, Midtown South and Downtown, because we like to say that [Manhattan], as well as the outer boroughs and the Jersey waterfront, function as a highly inefficient market,” he mused. “You could have a $150-[per-square-foot] building next to a $50-[per-square-foot] building, and this presents the opportunity for maximum leverage for tenants. So why limit oneself to just looking at the Plaza District or Chelsea or World Trade Center submarket?”

FINDING THE SWEET SPOT
Mr. Marans, who was promoted to managing director earlier this year, has two areas of focus: identifying new business opportunities and managing existing clients. For the former, he does some of the same things he did when he first started, like cold calling potential clients.

“I’ve kept notes every day that I’ve been in the office, on every call I’ve made. When I look back on the fall of 2009, I was making 150 calls a day,” he said. “Now I make 20 to 50 a day.”
Eventually, he said, “[I’m] a victim of [my] own success. There’s less time to canvas because I’m working on business. I just work smarter. My calls became more targeted, more thoroughly researched, so I’m getting more out of every call than I did when I was 23.”

Like a true Renaissance man, he credits his natural curiosity, but also his inclination to listen and learn rather than immediately offer his two cents.

“There’s a Hebrew proverb that goes ‘Who is the smart man? The one who learns from every man.’ And I’ve learned from everybody, from the mailroom guy to the CEO of the company…That’s the beauty of real estate; you need to learn a little about a lot of things,” he said.

On the flip side, he appreciates Savills Studley’s narrow focus.

“We only do tenant rep, and the outgrowth of that is we will never be in a position of conflict representing our client. We only have, really, one revenue stream—representing companies. We can’t fall back on things like landlord agencies,” Mr. Marans said. “There’s a purity of purpose to Savills Studley’s platform…which means we have to do it extraordinarily well.”

Mr. Marans said the other great thing about working at Savills Studley is the high rate at which clients repeatedly come back. He credits the firm’s steadfast commitment to the customer as a big reason.

He lives that kind of commitment in his personal life, too. Each night he comes home to his Upper East Side residence to the woman he’s known since he was 19 years old, Melissa Anne Glazer. They had met at a one-week college leadership training seminar in Boston and hit it off, just before starting college—his in New York City, hers in Ohio. He found her on Facebook shortly after meeting and kept in touch over the years.

“Four years later she moved to New York…and she asked me out,” he admitted. He said “yes.”

“Two years later we were married,” he said, with the smile of someone who appreciates both the luck and persistence that has so permeated his life.