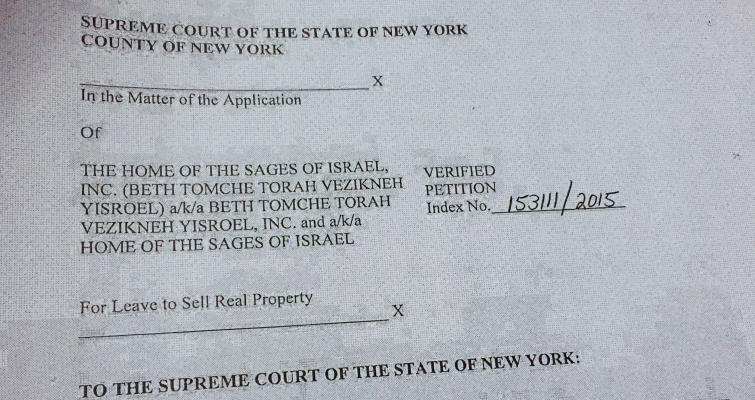 An effort by the Home of Sages synagogue to sell itself to the developer Peter Fine has roiled an Orthodox congregation.

There’s something very fishy on the Lower East Side and it’s not the Fulton Fish Market. A mysterious deal to sell a shul out from under its members and donate more than three-quarters of the proceeds to a small unrelated sect in Israel has raised so many red flags that it looks like a rally in Tiananmen Square.

There’s a hearing next Wednesday in the New York State Supreme Court before a judge who will be asked to approve the $13 million sale of Home of the Sages (which as a non-profit needs a “Leave of Court” to finalize any sale), a venerable synagogue/nursing home at 25 Bialystoker Place just south of Delancey Street. The buyer is a developer named Peter Fine, who has built nearly 10,000 affordable housing units and is also a friend of William Rapfogel, the now-disgraced Met Council boss who is serving a 10-year prison term for defrauding his charity.

But even though this sale is pending, not everybody is sure that the congregants really want to sell.

Behind the scenes is the trustee and president of Home of the Sages, Rabbi Samuel Aschkenazi (not the shul’s spiritual leader), who convened the board of trustees and suggested that the synagogue close and sell itself. That struck many congregants, who felt that the synagogue had plenty enough action to remain open, as odd. But the board—consisting of  nine members who do not live in Manhattan, another red flag since usually the board of an Orthodox synagogue lives within walking distance—approved and reached a deal to sell its building and land for $13 million to Mr. Fine.

According to David Jaroslawicz, the attorney representing the congregants who oppose the sale, Rabbi Shmuel Fishelis—the shul’s spiritual leader—was equally nonplussed by the sudden emergence of this shadow board. “I saw Fishelis yesterday and met with him and actually had him sign an affidavit. He’s been the rabbi there for 35 years. He never heard of 90 percent of the people who were allegedly the members who voted to sell the shul, never even heard of them.”

Mr. Jaroslawicz believes that Mr. Aschkenazi’s membership in the Goor sect of Hasidism played a role in the sale. “Aschkenazi thought it would be nice to divert the money to his sect, and the people who voted for it, none of whom are really members of this shul, and don’t pray there. They live in Brooklyn, they agreed with him because they’re all members of the sect.” (According to one congregant, Mr. Aschkenazi is the only member of the Goor sect at the Home of Sages.)

It’s certainly unclear that Mr. Aschkenazi even has the authority to represent the shul’s best interests. As Mr. From put it, “He started off as a nonprofit executive director and now he’s treating himself as if he owns the shul and the nursing home.”

Then another strange red flag emerged. In the application that the Home of the Sages makes to the Attorney General and to the court, the shul says that it doesn’t need the full $13 million expected from the sale—it only needs $3 million for a comfortable reserve for future operations. Home of Sages is going to donate the balance—$10 million of a $13 million sale—to a group that “may use these proceeds to help it build a new synagogue in Jerusalem,” according to the documents. The lucky recipient of that $10 million? “Friends of Mosdot Goor.”

One lawyer Commercial Observer spoke to suggested that donating 77 percent of the proceeds from a sale by one charity to another far-away charity violates the spirit of laws intended to govern the use of tax-shielded charitable donations. Mr. Jaroslawicz told CO, “I think they have a real problem legally. There’s a legal concept called cy–près doctrine, which means if someone built a home in 1885 for disabled veterans of the Civil War, sooner or later those veterans die out. So what do you do with that money? You say, ‘Listen, this guy obviously wanted to have a home for veterans, so why don’t we give it to veterans of World War II or the Vietnam War or the Iraqi War?’”

“Basically, it’s a one-man show,” said Dr. From. Mr. Aschkenazi “puts this board in to say it’s O.K. we’re going to sell the place. And the ultimate goal is to sell and transfer all the money to Israel. If as recently as this year you were sending charity letters across the U.S., let the money stay here on the Lower East Side to help poor people. Or give it back to the people who gave you the donations. Why give it to Israel? The money shouldn’t go to the last man standing as the neighborhood changes.”

But wait—there’s yet another red flag. The synagogue, which still intends to function, now needs a place to meet. For that purpose, on August 18, 2014, the board entered into a five-year lease with Congregation Tifereth Shmuel, paying $48,000 a year to use its space in Kew Gardens, Queens. This would make the prospect of a daily minyan for Orthodox Jews living on the Lower East Side laughably impractical. So the sudden move to Queens is … strange. But then, according to at least one member of the synagogue, it was a surprise to many when it was revealed that the new synagogue in Queens was actually located in Rabbi Aschkenazi’s house, above his garage.

Something even stranger was a review of the lease itself. As the “Tenant,” Rabbi Aschkenazi signed it on behalf of the Home of Sages. Signing as representative for the “Landlord,” Congregation Tifereth Shmuel, was someone named “Rahma Bithya.” That is actually the maiden name of Mr. Aschkenazi’s wife, Bithya R Aschkenazi. A thorough Lexis search identified no other instance of Ms. Aschkenazi using the name Rahma Bithya. In fact, the lease itself is not notarized (perhaps no notary could be deployed without a record of that being a legitimate name in current use.) The registration for her Infiniti G20, for example, is in the name of “Bithya R. Aschkenazi,” and the same name appears on her voter registration card.

According to Mr. Jaroslawicz this monkey business with the names “was an attempt, in my opinion, to conceal.”

CO has also obtained the 990s for Home of the Sages from 2010 through 2012, and those too feature some eyebrow-raising revelations. In 2012, for example, the charity donated $50,000 to Congregation Tifereth Shmuel, listing the same address as the Aschkenazis’ home address that appears on Bithya’s voter registration. The space for “Purpose of grant” is left blank.

Reached briefly on his cellphone (which incidentally is registered to “Renee Aschkenazi”), and asked a few questions about the sale of Home of Sages, Rabbi Aschkenazi yelled, “This is not your business!” and hung up.

It is unclear how Mr. Aschkenazi became involved with Mr. Fine. In the past, Mr. Fine, a developer of affordable housing who has also dabbled in Broadway producing, winning a Tony for In the Heights, in addition to his history with Mr. Rapfogel. According to a lawyer who spoke to CO on condition of anonymity because of ongoing dealings with OCB, “Two years ago, when Willie went into the office, he was the prince. Whatever he said was golden. No one looked, no one checked. When he went to jail, a lot of things he did began to blow up, and this [meaning the Home of the Sages deal] one of them.”

In 2010, after suspicions arose from Mr. Fine’s ally, former Bronx Borough President Adolfo Carrión, supporting Mr. Fine’s project in the Bronx, Department of Investigation and the Manhattan district attorney’s office conducted a joint raid on the Soho offices of Mr. Fine’s Atlantic Development. He was also involved in some nasty litigation against Larry Silverstein and Joseph Moinian, both of whom Atlantic accused of failing to honor agreements to buy the rights to 421-a tax certificates he held when they couldn’t find financing for their luxury projects.

While no one has suggested that Mr. Fine has played any role in this nasty intra-shul dispute, his involvement with a transaction this small, along with his colorful history, is at least worth noting, if not quite a red flag.

Mr. Fine’s spokesman, Mike McKeon, told CO, “Peter is a developer, so people come to him and say, ‘Would you be interested in things?’ I don’t know the actual history, frankly, of how he came to get involved with this property, but I can tell you it’s not Willie. Willie’s not involved with this piece of property, that much I know for sure.”

The attorney for the congregants who oppose the sale, Mr. Jaroslawicz, is representing his clients pro bono.

“You know what? We’ve offered to go to a beit din,” referring to a court in which learned rabbis would decide the matter in accordance with Jewish law. “We said, ‘Why don’t you adjourn this matter for two or three weeks? This thing stinks. Let’s go to a legitimate beit din and have them rule on it,’ and they don’t want to go. So we have no choice but to air this dirty laundry in public and just let it all out there. ”

On Wednesday, a judge denied Mr. Jaroslawicz’s motion to adjourn the matter.

“Why is the best use of the $3 million—forget about the $10 million which is going off to Israel and no one can trace it there—but the $3 million is to give it to himself and his other shul rather than any other shul on the Lower East Side?” Mr. Jaroslawicz asked. “I’m dying to put this Rabbi Aschkenazi on the stand.”

[This story first appeared in a slightly different format on New York Observer.]

CORRECTION: The spokesman for Mr. Fine contacted the Observer after publication to assert that “Peter was never a co-worker with Willie Rapfogel. His time at the Met Council ended well before Willie Rapfogel started there.” The text has been corrected.