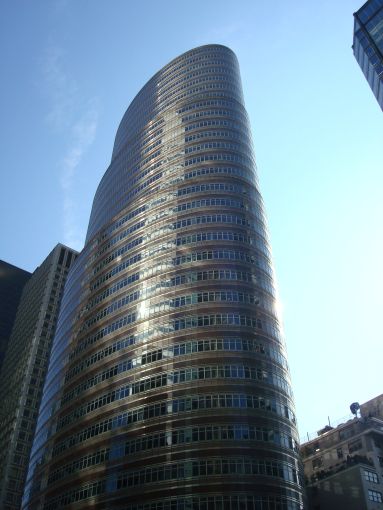 StepStone Group, a global private markets firm, has leased the entire 17th floor at the Lipstick Building, one of the floors leased to Bernard L. Madoff Investment Securities, and the site of where company head Bernard Madoff operated his $65 billion Ponzi scheme, Commercial Observer has learned.

StepStone signed a 10-year lease for the 19,270-square-foot renovated space in the 34-story IRSA– and Marciano Investment Group-owned office tower at 885 Third Avenue between East 53rd and East 54th Streets, according to a release from the owners and the building’s co-asset management firm Herald Square Properties. The asking rent was $85 per square foot. The deal brings the building to 97 percent occupied. Only the 13,200-square-foot 28th floor is available for lease.

Newmark Grubb Knight Frank’s Scott Klau previously acknowledged that there had been a bit of a stigma attached to Mr. Madoff’s space, but with the addition of “the highest-end pre-builts” for speculative space and “focusing on the iconic nature” of the building, those days are over.

Mr. Madoff was arrested in December 2008 for conning investors out of $65 billion and the 17th floor in the Lipstick Building was what The New York Times called “the epicenter” of the Ponzi scheme.

Mr. Klau and NGKF colleagues Erik Harris and Mark Weiss represented the landlords in the deal. CBRE’s Silvio Petriello and Nick Weld represented StepStone Group, which will be relocating from 505 Fifth Avenue this summer. The brokers didn’t immediately respond to a request for comment.

The Lipstick Building has been owned by a group of investors, primarily comprised of IRSA, Argentina’s largest real estate firm, and the Marciano Investment Group since 2010. They launched a multi-million-dollar capital improvements program has included Gensler-designed pre-built offices for new tenants and a lobby exhibition space created by Moed de Armas & Shannon. A new restaurant, Crimson & Rye, owned by celebrity chef Charlie Palmer, opened last year in the northern lobby. It joins Wolfgang’s Steakhouse in the adjacent standalone section in the building.

“From the very beginning, our work with [Daniel Elsztain, the director of IRSA,] centered on the meaningful renewal of the building’s time-honored image,” said Gerard Nocera, a principal of Herald Square Properties, in prepared remarks. “Our firm has overseen many capital improvement plans over the years, but this one has been unique in its focus on the historical value of the asset, in addition to implementing important upgrades.”

International law firm Latham & Watkins recently took a portion of the 25th floor and will occupy an estimated 400,000 square feet in the building. As CO reported last June, Meadows Office Furniture relocated its Manhattan headquarters to the entire 29th floor of the Lipstick Building. Other tenants include Goulston & Storrs, Corpbanca and German-based media firm GWFF.

“We are proud to add the StepStone Group to a most auspicious tenant roster,” said Mr. Elsztain. “Our firms purchased this asset because it was an internationally recognized building with a distinct design. But there were challenges to overcome and we have succeeded in little over four years.”

StepStone Group is slated to move into the new digs this August.