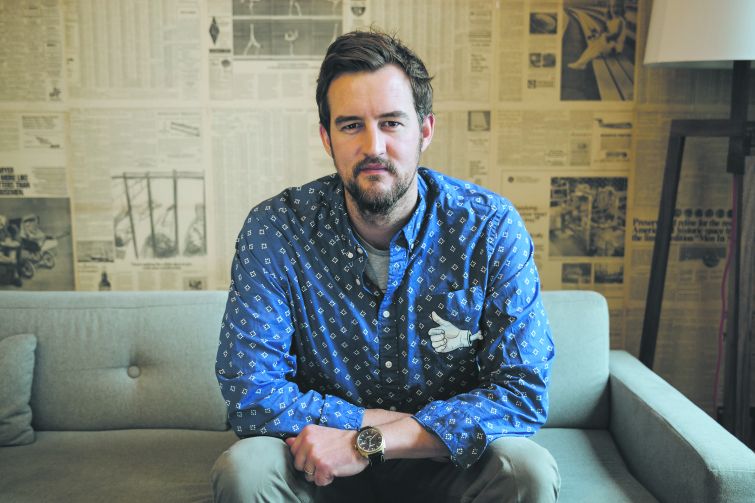 Late last year, WeWork—the communal workspace company, which was founded in 2008—was valued at $5 billion. This co-working giant has been swallowing up hundreds of thousands of square feet of New York office space, and is only planning more. (It was reported last week that they’re even bringing the concept to residential as well as commercial space.)
It is fair to say that this company is standing the traditional office on its head. How did that happen? Where will they strike next? And (because this is in a Midtown South issue), how ripe is Midtown and Midtown South for expansion? We posed these questions—and a few others—to Miguel McKelvey who co-founded the company with Adam Neumann.

What kind of companies do you see in your Midtown locations?
It hasn’t been profoundly different than the other locations, except it has a little bit more of a mature membership base. It seems to be companies that have been in business longer and are a little more established.

What are the neighborhoods you guys are looking at for expansion?
When we started we thought [the creative people] were more centralized downtown—like Soho and the Meatpacking District. But we found that every location we looked at has its audience. We’re really opportunistic in looking at things all over the city and in Brooklyn, and potentially New Jersey. But we’re looking everywhere.

What makes a neighborhood WeWork worthy? What do you look for?
Certainly convenient transportation is a great component. The potential for evolution is interesting. Five years ago, no one was walking down Lafayette [and Grand] saying [it] was a great location for an office, but now that’s one of our most beloved buildings. Same thing on Varick Street.
I think we create some of our own community that extends to the ground floor, but if a location has good restaurants, coffee shops, good night life—that’s great but it’s not essential because we know that will follow as well. We think we can do as much for the neighborhood as the neighborhood does for us.

How does launching something in Midtown South—or Soho—compare to, say, Red Hook? Or, for that matter, the South End of London?
I think it’s a different exercise in terms of figuring out who the audience is and who’s looking to locate themselves on a daily basis [there], and believing in the sort of culture that will be created.
With Red Hook, you imagine there are more edgy, creative people who are pioneers and who want to live there, and so you would probably expect your audience to reflect that. In Midtown, because it was less traditionally creative, we had to figure out how we were going to be able to create that buzzing entry—people who are bringing new ideas and innovations to the world … that energy is a core of our value proposition.

You guys started in Soho and then across from the Empire State Building (Midtown South, for our purposes)…why there? Four years later, would it be possible to do it in those areas or are they too expensive?
Back then we were looking around Union Square as our primary target … to be close to lots of transportation.
The reason we started in Soho was certainly opportunistic. It was a whole different market back then and obviously what people thought of us was much different, because we didn’t have the same size and scale and credibility as a business [as we do now]. So our criteria for finding real estate had to be more [about] taking what we could get. It happened that we could forge a relationship with the owner of that building. We looked at other places but it didn’t work out.
For the location across from the Empire State Building, that was a unique thing because we were next to this iconic structure. We felt if you’re a young company and you’re looking for credibility, part of that you get from your office space. If you’re telling … your customers: “Our office is across the street from the Empire State Building,” that means something. It wouldn’t have been the same if we were two blocks off.

How much of your business is in New York?
We have [about] 30 locations, 14 in New York City. The locations we have here are a bit larger. [They plan to have 60 by the end of the year.]

What has been the reaction of landlords to your business model?
When we started we had a lot of pushback. No one knew who we were; we had no credit and didn’t have a lot of money.
A lot of our initial deals were relationship based … [at] our Meatpacking location we worked on that for over a year. It was a ton of work for us to convince them we were the right people. Now, obviously, it’s way different, pretty much every landlord in the world is coming to us. So the shoe is on the other foot in some ways.

You guys announced that you were going to do apartments over 110 Wall Street … is this a new part of the WeWork business model? Are you going to be doing it elsewhere?
I don’t think we have announced that. It’s something we are interested in. We found the creators and people who are bringing new businesses to the world are not being served well by the residential real estate solutions that are available to them. We think it’s an interesting market and an extension of what we do, and a way to serve our members so they can follow their creative path.

There was a story in Forbes that you grew up on food stamps in Oregon—when you got the $5 billion valuation, what did you think?
To be honest that’s something I’m still reconciling. I’ve never really been a person who cared about money very much and I don’t think that that’s changed. I don’t really think about it yet from the perspective of what it means to me, but I do think that our future includes ways to help empower many different people.
One of the exciting things for me is to look … at the nonprofits inside of WeWork and … do what I can to help out their efforts.

Also, your co-founder Adam Neumann grew up in a kibbutz and you grew up in a five-mother collective in Oregon. Do you think those two things were a factor in coming up with WeWork?
Absolutely. When we first started [as] a much smaller team … I had people who came from Oregon and … their perception from the outside was, this place … encapsulates both of us, our personalities, the ways that we express ourselves even verbally and emotionally. It is in some ways translated through the buildings we’ve created, the parties, the social experiences that we create. So it does come from our background in a pretty strong way.

What was the biggest hurdle you had to clear in business?
I think that we have yet to clear it. As soon as we realized early on what the potential was for us as a company and a brand, and really as an empowerment mechanism for other people—we knew what we were going to become and what we are working on becoming. We still have a long way to go before we’re going to get there … trying to figure out when that time will come, when we’ll feel like we’ve made it. The challenge is that it’s only up to us to mess it up, and we don’t want to do that.